April is a big Anniversary month for me - in fact today is my sister's eight wedding anniversary. I nearly forgot to notice, though, that this blog turned 4 on Sunday. Thanks for reading, everyone! He was a black tea leaf.
Posted by Catherine at 7:57 PM 4 comments:

Making a Spectacle of Yourself 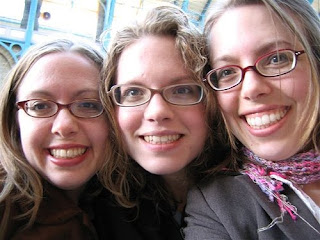 All right, so over the weekend I was in Claire's Accessories (what? I like their...hair clips), and I noticed a whole section of eyeglasses, not sunglasses. I thought, well, this is nice, people who need reading glasses don't need to shell out a lot of money. Then I looked closer. They weren't reading glasses. They were Accessories.

I do not appreciate this. Unless you're working for a great metropolitan newspaper and you fly off to save the day regularly, wearing fake glasses is uncalled for. Think about it: why were eyeglasses invented? For vision correction. That's it. They've been perfected over the years, made a bit more attractive, so that those of us who have bad eyesight don't get beat up in gym class as much. I'm grateful for that.

I've been wearing glasses since 1984. I have contact lenses, but I can't wear them every day, and at my prescription they're pricey (on top of paying to have the lenses on my glasses look less Coke bottley). I'd rather not need them, but I know it's better than being actually blind, so I deal with it. And frankly, when I've had a restless night, it does cover up the puffiness a bit, so yes, there's a benefit.

But as an accessory? Wrong! Myopia isn't quite a disability, but it feels like one. Who would roll around in a wheelchair because it's suddenly hip? Who would wear a neck brace or a hearing aid, or a arm cast because it's a trend? No, if someone did that, it would be considered sick and cruel to the real sufferers. What makes vision correction different? Bad form!

That's it, I'm just cranky. I think I'll just retreat to my quiet apartment, and enjoy a nice cup of Theraflu. No, I'm not sick. What?
Posted by Catherine at 8:00 AM 3 comments: