It's probably a good thing I joined a gym in the summer, even though I only recently starting going. There are too many amazing ways to put on pounds, and too few ways to drop them. It was uncomfortably convenient that last week's battle with my immune system left some casualties in the poundage arena, but I'm hoping there's no sequel for the rest of the winter. I love long walks in the City, but that's curtailed severely once the temperature drops below freezing. And now I really don't have to walk far to reach most of my tea time favorites.

Already Crumbs opened up near my office building, and Magnolia is threatening to any month now. Then there's Financier, which, as mentioned last time, has some inexcusably awesome pastries. I was already excited about their macarons, and now I have another, more strange source. Flipping Starbucks!

I walked past one of their ubiquitous branches during lunch, and the corner of my eye caught the colorful pictures of macarons on a box in one of their cases. I know: how on earth does a nearly blind woman who was preoccupied with thoughts of visiting a favorite pen store catch such a detail in her periphery? I'm not sure; I think I'm just drawn to tea and items related to tea drinking. It's teadar, to attempt to coin another corny tea word. Well, instantly I was in there shelling out $10 for a dozen macarons. At least my wallet's getting thinner!

I can say that so far I'm not disappointed. I've had the pistachio, which tasted almost like a nutty matcha scone, and the lemon, which is admittedly hard to mess up. The texture was done right, and it went well with Kusmi tea's 'Bouquet de Fleurs'. I cannot guarantee that these are necessarily better than Macaron Cafe's, but I am certainly saved the hike. Not sure that's a good thing, but it gave me a little bit of happiness on a Monday.

By the way, on the box it says the macarons are made in France by Chateau Blanc. Not super fresh, then, but not bad for Starbucks.
Posted by Catherine at 1:27 PM 3 comments:

Well, the tea tastings have been on hiatus...but...

When your eagerly anticipated final 4-day weekend of the year comes around, if you're a Tea Queen Book Lover and it's supposed to be not the best weather that particular weekend, your itinerary might include the following: catching up on reading, doing some much needed home organization, maybe some shopping, writing, baking, and of course, tea tasting. I really intended to get to a good portion of these things among others, and what better time to really concentrate on all the teas I've read to taste in earnest than a long, chilly weekend? The best intentions, sadly: my immune system had other plans.

I spent four days sleeping, blowing my nose, sipping Theraflu, sleeping some more, trying to read and being too tired to, and sleeping again. There was a bit of staring at the TV slack-jawed in the midst of all that. Good job I had that time off, but not too exciting. Not really cozy either, especially when my lungs turned into a 5-car pileup. Sure, I drank tea, but the taste buds have been a bit off, so I mostly stuck to whatever was getting stale, with some honey. I was too miserable to be miserable.

I returned to work today, feeling almost better - though I sound horrible. Kind of like a husky Big Bird. I'm not as tired as before, but I'm not quite up to distinguishing particular flavors in tea, so I really wanted something to cheer me up.

Here's what I got: the library had the new Jasper Fforde book, Shades of Grey, waiting for me. It was earlier than I'd expected: Amazon said it'd be out on the 29th. At the library I bought a green lion tote for $1, which will be useful (and adds to the Mad Cat Lady persona.) Then I found out that Financier opened up in Grand Central Terminal. It sounds kind of financial, but it's actually a patisserie that just happens to have macarons! Okay, they don't have quite the variety that Macaron Cafe has, but I am saved a good half mile walk on a freezing day. My chest thanks me. I tried one of the macarons already. It tastes of almonds, with a chocolate ganache. The consistency is slightly different than what I'm used to, but it's still Heaven. I'm going to have to figure out a good tea pairing with this one. At least I have my book pairing!

So I figure you can't have everything, but you can have a thing or two, and that's something.
Posted by Catherine at 2:03 PM 3 comments:

I can't help myself! 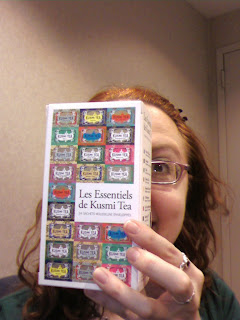 It's not like I need any new tea. Now, if I can find an excuse for buying some, it quickly seems like a need.

So, at work we have tea. The choices are Earl Grey, Green Tea (possibly a Sencha but Celestial Seasonings didn't specify), and Lipton. If I'm in need of a quick caffeine fix, this is fine, and I'm grateful for these provisions. But I'm a girl who likes variety, and during the winter months this becomes even more of a necessity. If I get bored in the flavor department, I'll be sorely tempted to rush out and get a cupcake or two...Crumbs and the Cupcake Truck are too close to the office building. This is a fun solution, of course, but if I keep going at this rate I'm gonna bust out of my clothes Incredible Hulk-style.

I have brought in my own tea often enough. I even have strainers, so I can actually have a proper tea setting at my desk. However, this isn't exactly possible on a daily basis. My job requires a bit of getting up and moving from place to place (one place more often than not being the copy room,) and it's just not practical to deal with the whole process of scooping out loose tea AND cleaning a teapot at some point in the day. I finally admitted to myself that teabags are a necessary evil in the office. So, I'd better get myself some good quality tea in some good quality, roomy teabags. Hence a great excuse for a shopping excursion.

There. I've convinced myself.

So off I went to Tea and Honey, which I wrote about exactly six months ago. I was there recently to buy tea for gifts, but for myself it's been awhile. Bianca made a bunch of good suggestions, and I settled on two boxes from Le Palais Des Thes: Saint-James and Big Ben (or should I say, Big Surprise.) Then a box from Kusmi caught my eye: their Essentials, which is two muslin sachets each of 12 different teas. Some are blends, and at least one is straight up Darjeeling. I've already tried one, Sweet Love, which I liked, though I probably wouldn't get a whole container as liquorice is not my thing really.

All of this cost enough, but at least now I have a great deal of sampling to look forward to in the cold months ahead. What can I say? It's my thing.
Posted by Catherine at 1:55 PM 3 comments:

I'm one of those people who actually sits through commercials during DVR'd programs. Not all the time, of course, but I do like to see what's going on in advertising. It is its own art form, after all.

There aren't too many tea commercials on television - at least, not in the US. Bottled iced tea companies, once in a while, but otherwise it's extremely rare. So it felt like a new experience when I happened to pass by Radiance today, and saw there were two TV screens outside, on the building wall itself but at eye level, playing what was essentially ads for the tea room. The one I watched in its entirety (I was pressed for time, but it wasn't very long) showed scenes from inside the tea room. A woman enters Radiance and is greeted by one of the staff. Eventually she is joined by another guest. There's a small group of people who seems to be having a business lunch. Shots of the tea merchandise are shown, and of course the tea fare. We are also shown some really studious looking people seated at library-type tables in the bookshop section, each enjoying a cup of tea as they are jotting down notes. Everything is bright and welcoming...well, radiant.

I was five seconds from being pulled in by this promotional tractor beam. What an excellent idea. It wasn't Times Square flashy - it was peaceful, just like the words on the screen say: "an oasis in the city". There was no volume, though, so I did wonder if the video had any actual dialogue or soundtrack.

I'm gonna keep a lookout for more tea advertising in the future. I love the old ads from companies like Lipton and Ty-phoo, and would collect them if I had any room left to do so. Well, there's always room on YouTube!
Posted by Catherine at 1:00 AM 3 comments: