I reported a few months back on my first visit to Teany since it reopened. My greatest letdown at the time was that they'd run out of Teanychino. I'm glad to say that at today's visit this was not a problem. The beverage was lovely, and it was, I must say, the perfect day for it. I also had the Teany Tea Sandwich, which succeeded in getting me to eat massive portions of (pickled) beets and actually enjoying it. Dwight Shrute would be proud.

So what am I gonna whine about now? Something quite dear to my heart. It seems Teany has dispensed with Afternoon Tea. They still serve scones, but they no longer provide clotted cream, just butter and jam. Why, Teany? Why? I'm not gonna go into paragraphs of what I love about my three tiers of delight; been there done that. But Teany, you had Afternoon Tea for years. Why the change? If it ain't broke...

What baffles me, though, is that the online menu still has it. Perhaps it hasn't been updated recently: I'd get on that. Otherwise it's just a tease.

Now, I have no problem with the service. Everyone was friendly, and we were certainly not ignored. Of course, we were one of only a handful of people in the cafe. I know it was Friday night, and not everyone decides to go for tea at that time if they're normal, but in the past, even in June, it was more crowded. I don't want to see Teany fare badly; I just want to understand what the changes are about.

Also, they still have the list of teas in a binder, and it's still a good vegetarian eating establishment. As long as there tea loving vegetarians/vegans in New York, Teany could be around for a long time. I wish them well, but I'm moving on.

We didn't stay for dessert; instead, we picked up cupcakes at Sugar Sweet Sunshine. I love this place. They've got it decorated like the way I dress - or rather the way I used to before I toned down a little. The furniture is shabby chic, though we only bought cupcakes to go. I'm home now, so I tried the red velvet cupcake ("sexy red velvet" to be exact), and it's perfection. No wonder they were listed recently in a top ten list of best cupcakes in New York. Even better, the cupcakes are $1.50, which is half the price of Magnolia's. I had it with a "Sino the Red" tea, which I'll elaborate on in my next installment.

Right before we went down the steps to the Delancey Street subway station, we caught sight of the Tribute in Light, where the Twin Towers used to be. It looks eerie, kind of spectral. I thought about how some things are gone for good, and sometimes you can't really substitute what's missing. I really hope Teany makes a bigger effort to, though.

Posted by Catherine at 10:04 PM No comments: 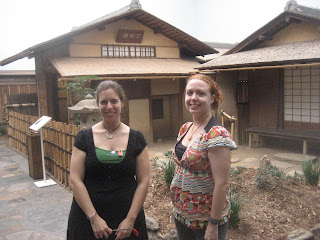 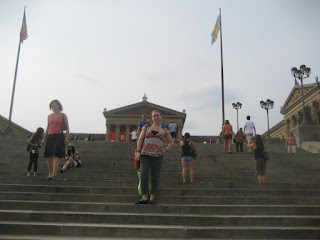 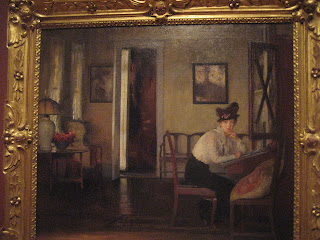 There's a drugstore on the corner of the block where I live. It's been there nearly four years. It's well lit, so when I pass by I can see everything they sell that's not hidden behind the counter. I can tell you where they keep their ibuprofen, mouthwash, and of course their tea. If memory serves me, however, I've never been inside.

But it's right there! you might be protesting. Just stop in; it won't be too much trouble. I agree. I still haven't passed the threshold.

Why is it some of the closest places are the ones I never visit? I could give you a list of locations in New York that are languishing on my to-do list. Carnegie Deli? Russian Tea Room? Someday, someday. How about one of the closest cities to New York...closer than Albany, possibly? Well, it had been a long time since I went to Philadelphia. A quarter of a century, apparently. I only have vague memories of the road trip there in 1985...I specifically remember hearing the song 'We Are the World' at one point.

So Daphne, who wasn't quite born the first time I went, said to me, "wanna do a day trip in Philly?" Hey, I survived two day trips to Boston, which is further away. Each time we took Megabus. I do have a few words about that. But first, I agreed to go, and she booked the reservation and did the mapping and planning. I'm doing enough planning for an upcoming trip, so I was glad to leave it in her hands.

The bus ride over was with little incident. I got mildly carsick, and spilled tea all over the table in the bus (but tables are fun! I love them in trains, too) but we made it in one piece. After a short walk, we made it to our first stop: Reading Terminal Market. It's a big old farmers market, with a variety of foods, specializing in Amish fare. I had what they called a pot pie, but it was more like a chicken dumpling soup. It wasn't bad. Daphne got a beef plate that was very much like SOS (ask a veteran). We also found a section in there with chocolates molded to look like internal organs. This was just the beginning in our adventures with Anatomy.

After a detour (let's just say I found the cutest dress!) we went to the Mutter Museum (of College of Physicians). Let me preface this by telling you a little bit about my history with body parts. It's just not my thing. I got out of dissecting a frog twice. The first time I had to take an essay to get into Advanced English in high school. The second time I let my lap partner do the dissecting, and I just looked on in fascinated disgust. I can't watch surgeries on television; it makes me ill. So a museum featuring nothing but real human skulls and pickled fetuses and misshapen stomaches is not going to uplift me. It is right up Daphne's alley, so I let her do her thing. I did buy syringe pen that I love. To calm the faint feeling that crept upon me (what a lightweight!), I relaxed in the Benjamin Rush Medicinal Plant Garden. If I had a garden, that's exactly what I'd do with it. That and maybe a few flowers. Just dwelling on these fantasies made me feel better.

The Philadelphia Art Museum does not have antiquities, but it does have those famous Rocky steps. I ran up about half of them. What? It was hot out! Besides, I needed my strength to take in all the lovely paintings. More importantly, this museum has a genuine tea house brought in from Japan...the ones they use for tea ceremonies. I've never been to one of these; they're too precise for me to pull off on my own. I do like some of its principles. I, of course, have my own version of a tea ceremony: Cathernoon Tea. We can talk about that another time.

The museums close at five, so nothing was entirely thorough. I had enough of a taste of them to know I could return for a good look around, without waiting so long this time.

After cooling off in a fountain frolic (what? It was hot out!) we did a little more walking. Philly's an okay city, but we must not have been in the most vibrant part of town at this time of the day. Almost everything was closed, and it was August, without a holiday in sight. The subways, by the way, were a little creepy.

On the transportation note, there was massive confusion in the bus lineup; the problem being there was no real lineup. Megabus needs to get on that, at least in Philadelphia. Get it together! I'd taken Dramamaine for safe measure this time, and was groggy, so the ride home went by in a blur. All in all it was a satisfying day trip. I'd like to go back someday, and if you have any suggestions of other places to see or eat at, let me know. Maybe I'll get to that corner drug store too. 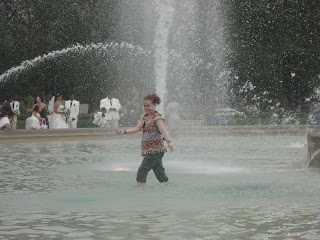