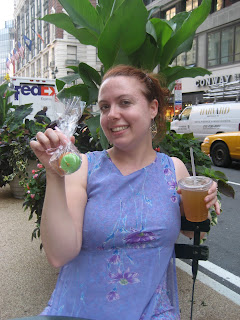 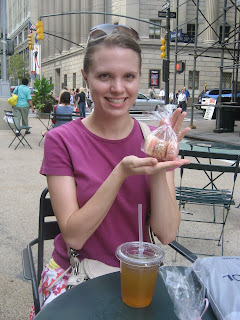 I've mentioned before that I recently discovered the delights of the macaron. It seems they even hold up during obnoxious heatwave weeks.

We took away our macarons from the aptly named Macaron Cafe. Much as I love the place, it's really tiny. There's enough seating for one party (maximum three people), and that area was already occupied with some girls taking tea. Need I mention this place has tea from Mariage Freres? That alone makes it worth a visit.

Though they have plenty of other items to offer: sandwiches, salads, croissants, crepes (heaven), which I'm sure helps in a Midtown location, there's really one reason I'd take the walk to the Garment District in 90 degree weather. There are enough varieties of macarons to give anyone pause. They are set out in a clear display showing them in all their bright colors. I was reminded of the bath bombs at Lush, though the bath bombs only look good enough to eat. Anyway, just as in the case of Lush products, you want to try them all. Bonnie and I got three each this time (her treat - thanks again!). I chose the Violette, Orange, and Pistachio this time. My favorites tend to be the flowery flavors. Still, I haven't met a flavor I didn't like.

We took them to go, along with iced apple cinnamon green tea. The tea tasted just like apple sauce with cinnamon sprinkled in, which sounds autumnal but was still refreshing out in the swelter. On Broadway the City has seen fit to put outdoor seating where traffic used to be. As a non-driver, I have no complaints about this. It was the perfect place for an evening treat. It also goes to show there are infinite places to take tea in New York. Iced tea helps, when it's blazing out. I think I mentioned it's been hot out?
Posted by Catherine at 8:00 AM 4 comments:

Call me a penny pincher, but

I try to enjoy myself when I go out, and not worry unduly about the cost of things. For the most part I've succeeded. Like anyone with a healthy view of their personal finances, though, some things just stick out like a sore thumb, and put at least a slight damper on the good times.

Yesterday I had brunch at Brick Cafe in Astoria. Brunch is one of those luxuries I happen to love, and Brick does a good job of it. I had the french toast with strawberry syrup (there's real strawberries involved - that's a plus), and it was lovely. My friends had no complaints about their omelets and french toasts, and we spent a long, happy time sitting out the ubiquitous rain showers. I'm still glad I went, wouldn't change a moment of it, but -

Why, why do they have to charge 3 BUCKS for a cup of tea? It was a bag of Stash Earl Grey next to a small cup of hot water, and it did taste nice, but COME ON!!! A box of 20 might cost $4 tops, so the margin of profit was astronomical, and for what? I could have splurged for a pot at Himalayan right down the block.

It's just the principle of the thing, and it's certainly not a unique issue to Brick. So many of these cafes/lounges are charging way too much for such an item. Maybe if the tea bag got up and sang Swanee River for me I'd feel better about shelling out $3, and then I'd feel even more inclined to plunge it into hot water. People. Be reasonable. Don't make me cringe when I come into your establishment to relax and have a nice meal with friends. Bring it down to $2, at least, and I'll feel more inclined to visit regularly, and write something a little nicer. Thank you.
Posted by Catherine at 3:47 PM 3 comments: