It's That Time Again...Any Day Now 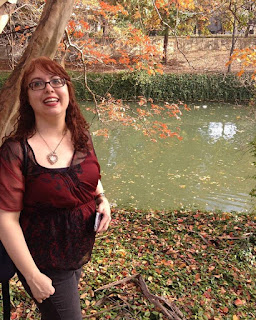 It has been a while, years actually, since I've done a "LOVE AUTUMN!" post.  Has my love cooled off? (I see what I did there...)  No, in fact it's only grown stronger.

The thing is, and this is not a complaint, but the past couple of summers have not been crazy hot or humid.  There have been bad days, but for the most part, I've been able to settle comfortably into July and August, and did not feel a need to bring on September.  I finally began to rethink my summer hate.  Maybe it was all in my head, wrapped up with my history of loss in the season.  Perhaps I could welcome summer from now on, with open (sometimes bared) arms.


Then this summer happened, and is still happening.  I've been reset to my factory setting, and I am thoroughly finished, and long for autumn.  How do I know the longing is real? Well, you'd think I would want to put off the season which brings my fortieth birthday, but I'm starting to shrug that off.  I'll take anything to be away from being held prisoner to air conditioning, and the severe curtailment of my walks.  I've hardly been to feed the ducks this summer, it's just too unpleasant out.  How many 90+ degree days have we had?  I've lost count!


Yes, we have had a break this week (couldn't have happened on the weekend?), but I hear the humidity is going to hit again real soon.  This only reinforces my craving for the more reasonable autumn temps (assuming we get a decent autumn this year.)


Whether you love or hate autumn, it will be arriving shortly, and I for one look forward to it.  It's a hard thing to admit to, though, because in recent years I've noticed a sort of disdain for Autumn Folk.  Those labeled the now-tired term 'basic' are mocked for their fall Tumblrs and Pinterest pages, and the mockery is especially leveled at white girls, which, okay, I am.  But basic?  This denotes some Borg-like knee-jerk reaction; millions of pasty ladies crunching leaves underfoot in one line, droning 'Pumpkin Spice Lattes...Pumpkin Spice Lattes..'  This grates at my sensibilities.  I've come a long way from tossing a favorite skirt because I saw someone else wearing it - it helped when I worked in the Garment District and realized just how many thousands would be made of an item.  I used to be freaked that I could be lumped into a grouping or...shudder...labeled.  But I'm older now, and can shrug off more than I used to.  Even so, it's a bit sad to feel apologetic just because I'm enthusiastic.  That being said, here's what I love and am looking forward to about Season Next.


Goodbye Salvation
I need that a/c during the summer if I want to sleep more than an hour each night.  This means my electric bill is atrocious.  Like the song You Really Got a Hold On Me says: "I don't want you, but I need you." We have a terrible love/hate relationship that almost borders on co-dependancy.  It's a relief to be able to crack a window for some air.


Subway, Slightly Fresh
Have you ever been punched by hot air?  You have if you ride the subway during the summer.  If you have to wait any more than a minute, the sweating begins, and by the time you get on a usually freezing train, your body doesn't know what's up or down.  Perfect recipe for a nasty summer cold, or in my case, a panic attack.  Gorgeous.

A Happy Medium
A good autumn, and a good spring for that matter, is a joy because it is refreshing to be outdoors.  One shouldn't have to brace oneself to step out. And though I'm not known to be outdoorsy, I do love my Crazy Long Walks.  In mild temps, I can go far without wearing myself out, and I don't have to see the inside of a gym for that (though I still have a gym membership.  I try.)


Fall Fashion
Miles past trying to be a fashionista, but in my younger days, when I cared about trendiness somewhat, one of the happiest moments of the year was around this time in August, when the big issues of the fashion magazines would come out.  Massive door-stoppers.  I usually bought one or two of them, usually InStyle or Vogue or Harper's Bazaar.  I knew I could never afford the couture featured in there, but the styles themselves were inspiring enough to work on.  To this day, I love dressing for autumn more than any other season.  The colors are kind to me, and so are the layers.  The light layers - none of these bulky winter numbers, but none of the arm-baring nonsense that I drape myself in in July.  Speaking of draping myself, I spent many happy autumns in velvet.  I don't like turtlenecks, but have many light scarves, and enough cardigans to make Mr. Rogers jealous.  Let's not forget boots.  I hate having to put on snow boots, but a comfortable lace-up, with the weather still allowing for the option of sneakers or lighter shoes, now that I love.  Also, if I haven't pedicured in a while, it's okay.  We won't get into shaving.


It Tastes Good
I can't drink Pumpkin Spice Lattes - woe is me! - but I can drink all the teas, and yes, the pumpkin spice features here.  Suddenly cinnamon, nutmeg, apples...the air smells wonderful when these are around.  I know they drink chai in the hottest times in India, but I associate it more readily with autumn.
In the summer, I just don't want to cook for a long time, and that goes double for baking.  It doesn't help that the a/c in my kitchen blows directly onto the stove, so it's awkward going.  When that mess is over, I can finally put some love into baking scones and cakes, and I will be making Sunday Roast this year, come what may.  Parsnips!  I'm looking forward to making stews, but not so much soup, because that sounds like pathetic snow weather fare.

TBR
I need no excuse to read any time of year.  However, I do love a good pairing, and I love anticipating which of my not-in-this-lifetime collection of TBRs I will read in each season.  For example, with the exception of the summer I read Bleak House, I find Charles Dickens should be a winter read.  We all know about beach reading, though personally I like to bring obnoxiously ponderous tomes to the beach, because everything around me is light and I get bored.  Here's some books I'd like to dive into, as some would a pile of leaves:

Alexander Hamilton, by Ron Chernow - I've been reading this little by little for months, but I'd like to finish it well before the year ends. He was kind of an Anglophile, so I could pair a nice English Breakfast.  I'd say Earl Grey, but I think he died shortly before its invention.  Shame.

British Mystery Novels - because I equate autumn weather with London (another reason right there), and most of my favorite mysteries take place there. I could even re-read Sherlock Holmes, in anticipation of a certain show returning in the winter.  I have a Baker Street blend with just enough Lapsang Souchong.

A Tea Book - I have a clump of tea books in my library that I still haven't read through, and some of them have recipes, so kill two birds there (sorry birds.)  Pair with tea.  Duh.

So, not incredibly specific, but I find the books have a mind of their own and will only be available to me when they want to be.  I know that makes no sense, and that's the point.

Now I would love to hear your suggestions for reading, pairing, or what you look forward to come autumn.

http://cataria.blogspot.com/
Posted by Catherine at 12:48 PM No comments:

There's just no pleasing me...

I can read on the subway, on the bus, on the plane, in some cars, at lunch, at tea, at home...almost everywhere.  I avoid walking and reading, usually: a couple of times I've gotten off my train in the middle of a crucial point in my book, and I can't wait to see what happens next.  Even then, I'll try the quieter streets.  Just like I don't like people texting on their phones bumping into me, I prefer not to be a nuisance.

One reading spot, which is beloved by many, I just can't get into, and that's in the bath. It is an awkward experience. I've tried to make it work - you know those bathtub caddies?  It holds everything you need to have a soak with the most. I've had them before, but here's the thing: the book stays dry, but what about when you need to turn the page?  What about an e-reader?  Well, all I need is for a knee to go rogue and knock the whole thing into the drink. Too risky.

A magazine is an occasional exception.  For instance, on my last visit to London, my friend and I stayed three nights in a hotel that was kind of posh for someone like me.  The bathtub was massive, especially compared to the one at home, and had a window overlooking the West End (well, mostly the theater housing The Lion King, but still pretty amazing.)  At this point, I thought I'd be cheating myself if I didn't at least try a luxurious soak, and so I grabbed a complimentary decorating mag and indulged.  Even then, it wasn't the delight I'd hoped it would be.  Why?  Well, maybe it's the bath taking itself.  I like it for a short time, and then I'm done.  I stopped buying Lush bath bombs because it didn't make sense to waste five bucks on something that I'd be bored of within minutes.  I've tried bringing a glass of wine, and that's almost worth it, and then I'm bored again.  Tea doesn't work, either, unless it's iced, and then I want a porch, not a tub.

Is this a failing of mine?  I suppose I can watch Netflix on my tablet, or listen to audio books to pass the time.  Or maybe I should stick to singing in the shower (sorry neighbors)... 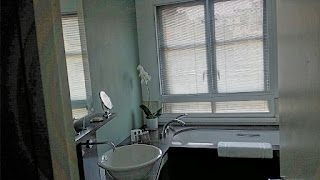 Posted by Catherine at 8:00 AM No comments: