Just over a year ago I was able to visit Beacon, New York for presumably the first time.  It's one of those smallish towns along the Hudson that I absolutely adore, and might choose to live in if I had to leave the City.  The mountain views alone are nearly enough for me!

Anyway, we were really hungry after a day of walking around the Hyde Park area (not the one in London, but pretty) and we ended up eating at a wonderful Soul Food restaurant on Main Street.  We did pass a Cup and Saucer Tea Room, which I had to pass wistfully.

A few months later, I received word that the tea room was now a Doctor Who-themed restaurant called Pandorica.  Fantastic,
right?  Well, yes and no...

Newly opened restaurants always have stuff to work out, and Pandorica was no different.  I'd read mixed reviews, and decided to wait until kinks were sorted.  Additionally, Pandorica's Facebook page urged locals to hold off visiting in its early stages.  I'm not sure if I'm really a local, as it's still and hour and a half drive away from Astoria (and longer on the Metro North I'm sure), but I didn't mind - I had a whole new series (season) of Doctor Who to enjoy, as well as the visit to the Doctor Who Experience in Cardiff.

After the long winter, and while it was still the lovely moderate weather of May, my friend Sarah and I were talking, and we decided we needed to stop talking and just go.  A day later, with her son and another younger friend, we were in Beacon!

It was a little warmer out than I'd have liked, but that wouldn't stop me from trying the Afternoon Tea.  Just off the bat, it was a Catherine-approved Afternoon Tea - tasty sandwiches, a variety of sweets, and scones with excellent clotted cream.  Pandorica definitely has that down.

The menu has Whovian-inspired items like Madame Vastra Po boys, K-9's (corn dogs, fitting), and a faux Fish Fingers and Custard. The tea was enough, so I couldn't try any of these, but I'm sure they were fine.  The menu wasn't necessarily inexpensive, but it's wasn't maddeningly pricey either.  The service could use some sprucing up - the staff wasn't nasty or anything, but they were kind of slow.

Here are some highlights of the restaurant's decor: 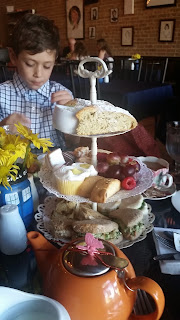 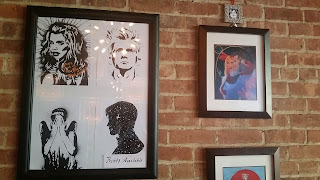 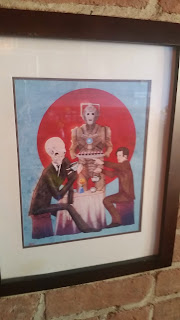 Fun, isn't it?  Plus, they have episodes of Doctor Who constantly streaming.  It was in early Amy Pond times when we were there.

I did think it was a well-done combination of tea and one of my favorite subjects, so a pairing.  My thoughts to improvement:  staff should dress in cosplay, or at the very least have TARDIS aprons.  I want to be transported.  Also, there was precious little Classic Who involved.  I know Pandorica springs from NuWho, and that's okay, but what of those of us who'd like to see art and knick knacks from the 70s, for instance?  The show has so much history, it's a shame to leave that out.

Know that Pandorica has events such as Trivia Wednesdays, and I'm sure it's great for locals, but I doubt I'd trudge up there myself for that reason.  Still, I'm glad I made it at last.  If I need to get my kicks in my area, I'll probably stick to the Way Station.
Posted by Catherine at 3:48 AM 2 comments: