Who can guess what I thought when I first read this LOLcat?

Either way, I had to share this particular muffin head.
Posted by Catherine at 6:12 PM 4 comments: Courtesy of Ikea, the cats have their own tent in my library. So far Zenobia's claimed it. Can't leave Moofer out! And his tissue.

There you have it. The books, the teapots, the cats. A lot like this blog.
Posted by Catherine at 8:40 PM 6 comments:

I was staring at my lovely bookshelves at home, and watching (for the umpteenth time) "84 Charing Cross Road". I decided to add to this melange of activity by reorganizing my shelves properly.

So, tons of questions come up as I'm trying to makeover my shelves: Should I separate paperbacks from hardcover? (yes, especially with fiction) What about non-fiction? How many subdivisions should there be? (turns out quite a few: there's the tea section, the histories, biographies, travel, anthologies, cookbooks - though most of those live in the kitchen). Where does poetry fit in? (they're in a class by themselves. Some put them in fiction, but why? When I write poems, they're usually about my life. Is that fiction? No, for the most part.)

Okay, this task should never be commenced at night. Information overload is worse than caffeine when trying to get some shut-eye. I managed to complete the fictions and do the rest the next evening. I have to say, the non-fictions still need work. At some point I simply jumbled a few categories together, because they looked good that way.

All in all, the project turned out well. My library is my running pet project, and has been for the past 3 years. All that's truly missing is my dream chaise lounge, but otherwise it's a pretty complete literary refuge. Photos will follow soon.
Posted by Catherine at 3:37 PM 4 comments:

Coffee is keeping me up at night...

Not in the expected way. I rarely drink coffee, simply because I can't. I'm only wired for minimal amounts of caffeine, which makes me the ideal tea lover.

The past few days something coffee-related has kept me up well past midnight, despite never having entered my digestive system. Two nights ago I finished the book "The Coffee Trader", which is an historical novel based in Amsterdam during the 17th century. The main character, Miguel, is a Portuguese Jew who fled the Inquisition and has had recent reversals of fortune in the trading industry. He gets involved in the developing coffee trade, so this story is more about the selling of coffee as a commodity than by the cup. Nevertheless, coffee lovers will enjoy the descriptions of those new to the practice of drinking coffee and its effects on them. Normally nothing bores me more than something relating to stock market-type adventures, but there was enough intrigue and redoubtable characters running through the book to make me unable to rest until I'd finished it.

In a related story, I found out about an online game called "Coffee Shop", in which you are the owner of a coffee stand and must try to make as much money as possible and keep a good reputation for 14 days. I'm not a video game player per se, but anyone who knew me during the Tetris years knows that once in a while I get hung up on a game long enough to obsess over it for hours on end. I actually did make some progress, but wasted too much time in the process. I have to say, though, I had a few good laughs. If you make a bad cup of coffee and overcharge, the cartoon buyers will either pour the cup out in disgust or vomit on the sidewalk. The seller in the stand just sits there and holds a finger over the cash register like nothing happened.

I will try to do something tea related tonight; perhaps this will counteract the trivial vigils of this week.
Posted by Catherine at 3:18 PM 2 comments:

Yes, it's really cold this week. No, I don't like it. Still, it could be worse.

In the morning, when I'm walking to the subway, ears tearing, breathing labored, hat head forming, I try to think of something positive about the weather. It's hard when it's extreme cold. December's coat weather wasn't too bad, because it was possible to be fashionable wintry. Now it's just layer-so-I-don't-get-hypothermia-wear. Not cool, so to speak.

What winter does have over the summer is the tea perks. I baked a good deal in the past week. For the first time ever, I made crumpets - and they were nice! With jam they were pretty special, but with honey I was truly in love. The only drawback was that though they're made on the stove, between waiting 30 minutes for the yeast to take effect and having to cook it in cookie cutters (and I don't have too many of the proper size), it took longer than some baked items. I suppose it was worth the wait. I also found a recipe for lemon blueberry loaf. Next time I'll scale down on the sugar, but otherwise, I have to say it was a sensual experience.

There's nothing like to dead of winter for having the excuse to stay indoors with the furballs and curl up with one of my 81 books for the year. So far, 3 completed. I think we can remedy this...time to put the kettle on!

Starbucks is courting me...

Starbucks rarely beckons me nowadays, but I did slow down for a moment earlier this week. The sign "Tea Time" is enough to catch my attention, especially in winter.

Just recently Starbucks has offered Tazo tea lattes. I saw about three on offer, though I hesitated earlier this week because I simply don't NEED to buy tea during working hours. Yesterday, though, I thought "why not" and dropped by the one in my work building.

I've been a bit distracted this week, and I think it showed when I tried to make the simple transaction with the barrista. I asked about the new teas, and she said, "did you want London Fog?" Am I that readable? Then while picking up the tea (with 2% milk, I wanted the real thing), this young guy fell in the line of my dizzy fire. He politely said, "sorry if I skipped you?", which he hadn't, so I said, "what?" and then it sank in that he was being polite so I tried to explain my slowness by saying, "sorry, I'm uncaffeinated at the moment" and he said "what?" and I said "what?", and he gave me the "you are weird" look and left. I don't know, crowded places just get to me. Moving on...

So I sipped London Fog back at work, and was surprisingly pleased. It's a lavender Earl Grey, with vanilla and milk. It smells and tastes slightly perfumey, but with a nice creamy touch. It's sweetened just enough to not be overwhelming. It's a contradiction in my normal tea tastes, in that normally I cringe when I see someone adding milk to Earl Grey. Pulled together, though, it was more of a treat. It didn't actually remind me of London though: maybe an English garden, not the city. I would have named it Zenobia: 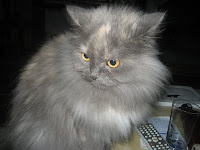 I'm sure I'll try the other flavors in the near future: a lady at work gave me a coupon for them that can be used every Tuesday.

Though I love true tea, without extra flavor or sweetener, there's always room in my heart for such concoctions.
Posted by Catherine at 11:00 AM 4 comments: