Let's Get Together and Feel Alright! 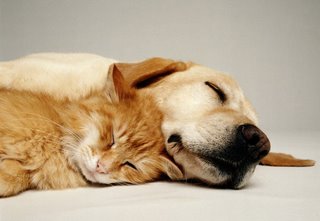 I just finished Henri Murger's The Bohemians of the Latin Quarter. I knew there would not be a happy ending, but I was met with a more frustrating outcome than I'd anticipated.

This is really Murger's only well-known work, at least in the English speaking world. The opera La Boheme was based on it, as well as the Broadway musical Rent. Even Moulin Rouge was loosely derived from the novel, or collection of stories pertaining to the same characters in a somewhat chronological order.

I wasn't actually entralled with the story, as it really should have been called "The Budget". Constantly the four main characters are trying to make ends meet while living out their Bohemian lifestyle. The reader finds out what everything cost in France around the 1840's. If I wanted to read about financial struggles, I could read my credit card statements. I was kind of annoyed at the mooching and the refusal to pay rent or other bills, even when one of them successfully sold their work. I'm not the shining example of responsibility, but these guys are brazen. Okay, it's kind of funny sometimes.

I knew there would be a tragic tuberculosis-related ending, and I really wanted to see how this would be presented. For some reason, though, my edition had missing pages all throughout the ending. Completely blank. So it turned out terribly choppy. I think the guys sell out after the death scene, but I'm not sure. This is frustrating as the only existing edition of this book in the New York Public Library system was in my hands (and overdue), and any other editions are expensive, even on Amazon or Alibris. I won't tell you how much, or I will begin to sound like Murger the Second. Suffice it to say I'm frustrated. What kind of *&((^$! book is this?

I'd see the opera, but it might dig into my rent money.
Posted by Catherine at 10:33 AM 3 comments:

It's true, there's nothing like a tea cocktail to make the evening Gata-esque. Just look at this NY Times article.

Sometimes I'm a purist - a good cup of tea doesn't need any enhancement. But I don't scoff at my favorite drink being used as an ingredient for cocktails, ice cream, even chicken sandwiches. It's fine either way for me, though I'm not sure the health benefits hold up in alcohol. Not a bad solution to a sore throat, though.
Posted by Catherine at 4:00 PM 1 comment: 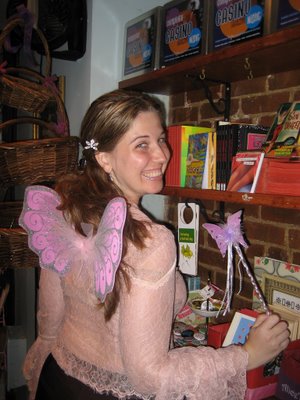 I spent a rainy Friday afternoon ensconced in the cozy Alice's Tea Cup - the West Side one, which I still prefer. Marie was there, and Teresa (visiting from Florida) and Melissa, her sister who now lives in NY. My day had already been a sensual delight after 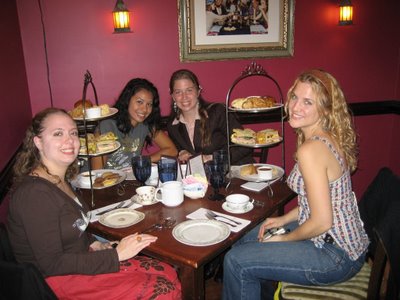 visiting Lush, so this was like the icing on the cake.


It's not news that I love Afternoon Tea - if I could have this every day... well, at least once a week...I would. But to be joined by other enthusiasts of the ritual was quite splendid. It was also a welcome respite from the recent hectic schedule that is my life. When my home is fully ready, of course, I will have afternoon tea in my lovely lavender living room. Going out to Alice's was certainly a treat. The atmosphere was pleasant and inviting, as opposed to Chapter II, which is gorgeous but slightly stuffy in a way I can't explain.

And as you can see above, I'm not the only one who indulges in fairy wings.

Later in the evening we spent a good deal of time in Borders - making it the ideal Gata day, rain or shine. 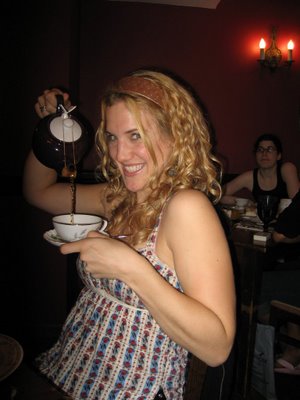 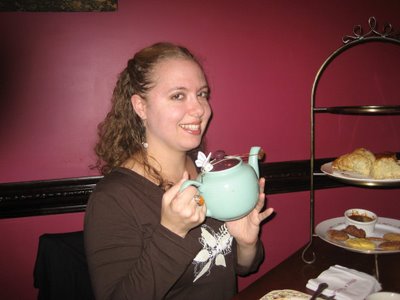 Bon and I heard that Randy Jackson of American Idol would be in Grand Central Vanderbilt Hall this afternoon promoting Nine Lives, and that he'd have the current Morris with him. We got there 15 minutes late, and they were already gone (sob - for Morris, not Randy). But....

The Nine Lives promotion was for adopting cats, and we still managed to scarf up a t-shirt each, and a sample bag of dry food - a generous serving too, would take Zenobia days to finish if she eats it - she's really picky. Then we turned around and saw the Real Simple promotion. Bonus! Not only were there free copies of the newest Real Simple magazine and their special Food edition, but they gave out goody bags....chocked full of fun stuff! I got a Green & Black chocolate bar (good stuff), Essie nail polish, Maybelline lip color, parmesan herb spice, a Celestial Seasonings iced tea powder sample, bronzer sample, a dishwashing liquid soap sample, and a blank recipe book for when I turn domestic. It pays to crowd around a promotion.

(I think it's in a shopping mall, kind of like Teavana, also a corny name but not too shabby on quality--qualitea while we're at it.)
Posted by Catherine at 5:00 PM 2 comments:

The Talking Teacup, in the Philadelphia vicinity: actually, this one got rave reviews and if I'm in the area I'll definitely check it out. But what does the teacup say when it talks? Perhaps:

"If I sound like Chip from Beauty and the Beast,
Maybe it's time to call a priest!"

It must be delightful tea, accompanied with a singing scone and a laughing lemon tart.
A rapping Rooibos?
Posted by Catherine at 1:58 PM 4 comments:

There are so many puns involved in naming tearooms, or just strange choices for names. Thought I'd share some with you.

#1:
The Goatea Room, Michigan : Apparently there are real goats hanging around. One customer thought she saw goat hairs on her plate. Cucumber saaaaaandwich, anyone?
Posted by Catherine at 1:42 PM 1 comment:

It feels like time is speeding in a dizzying pace, where everything seems like just yesterday. In September 2002, a group of us went out to eat in Little Italy. One of our friends was moving away to get married, and so I guess we were all talking about the future. Someone asked the question to the table, "Where do you see yourself in five years?" It's the job interview question I've always dreaded. Among friends, though, the first thing that came out of my mouth was, "new cats...", which cracked everyone up. Sadly, though, I was right. DuForth died 2 years after, and Sino this past January, and though I only have Zenobia, she is new. I never would have believed my Dad would be gone, though. I still can't believe it.

All the little kids I know are growing up. I hear myself saying, "Wow, you've gotten so big! I remember when you were this big" which I hated hearing from the older generations. Also heard from my mouth recently: "In my day..", "Ow! my knees!", "I don't recognize any of the VMA nominees", and, "I could be your mother! Enjoy High School!"

Well, at least I don't have acne anymore. Leave that to them whippersnappers.
Posted by Catherine at 4:40 PM 3 comments:

I was reading in Crain's (yes, I was) that Miriam Novalle of the T Salon plans to open 11 more tea shops around Manhattan, as well as moving her headquarters slightly Northwest. I say, Fantastic! Hope it works out - in my opinion, one can never have too many tea shops in New York.

Three years ago I worked for one day at the T Salon, and it was kind of a fun experience. Sadly, it didn't pay enough as it was retail sales. Too bad, it was the one chance I had to impress the public with my extensive tea knowledge (though there is so much more to learn!) Still, I love all the varieties of tea they offer. Ms. Novalle is tea royalty (but not of Astoria, I hang on to that title.) I'm sure I'll keep all my senses open for the, um, openings. Hope they open one in Midtown, near Grand Central Station (if you're reading this, hint, hint?)

And I will continue to explore other tea shops all over Manhattan, and beyond!
Posted by Catherine at 3:38 PM 4 comments: 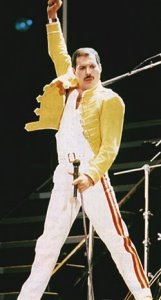 Would he still be doing live shows? Mick Jagger never thought he'd still perform after 50...and the Stones are on tour now!

The bigger question, what would Freddie be wearing in 2006?
Posted by Catherine at 1:25 PM 5 comments:

I'd signed up for adsense in the spring, which seems so far to be a complete waste of energy. Now they are putting up rather objectionable ads on my blogs. I've contacted the support service regarding this matter, so please be patient and ignore the ads until it gets fixed or removed.

You cannot imagine how upset I was.
Posted by Catherine at 5:43 PM 4 comments: