Of the four main museums this time around, this is the only one I hadn't been to previously. It's not that I didn't want to go before, but there's only so much time, and its location looked so isolated on the map. I'm not against a little commuting, but I need some semblance of schedule!

I'm finding more and more that tube maps are deceiving. They make Pimlico seem further than it is. I decided to brave the supposed long commute, as I'd heard that Tate Britain's Pre-Raphaelite collection was outstanding. Bonnie came along for the ride, though at this point she was fading fast from the combination of a head cold and the temperature finally dropping to London's normal autumnal rates. She kept going with the promise of Wagamama directly after the museum.

First of all, the commute wasn't that long. The walk from the tube station was only slightly lengthy, and we got to see a section of London we'd never seen before.

Let's get the negative out of the way first. The section I'd wanted to see the most, with the majority of the Pre-Raphaelites, was closed for some repairs or Grand Scheme to Disappoint Catherine - take your pick. So it wasn't all grand for me, but there were quite a few unexpected surprises, and mild coincidences.

Beyond a cursory glance at a guidebook, I wasn't sure what was included in Tate's collection, so I was open to pleasant surprises. Here's the first one: 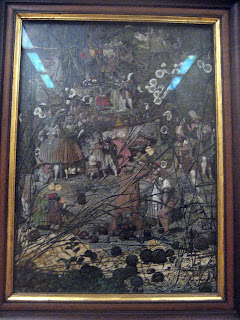 Okay, this painting is probably hard to get from the photograph (and I wasn't sure it photography was allowed, so I was covert all the way), but it's called The Fairy Feller's Master-Stroke, and was painted by Richard Dadd. Ironically, he was committed to Bedlam after confessing to the murder of his father. Apparently he was a paranoid schizophrenic, but also a recognized talent, and this painting was done while in the hospital.

Dadd's story and his work is interesting (and kind of disturbing) enough, but my connection to this work is that the band Queen named one of their songs after it; and the song is a bit erratic and odd, so now I see the connection. Dadd's poem about the painting seems to share similar lyric to Freddie Mercury's. I've also heard rumors that Mr. Dick of Dickens's David Copperfield is loosely based on Richard Dadd (his full name is similar, too.) Conversely, I read that the characters on the painting may have pictured people in the novel. Chicken or egg, it's still intriguing, considering the fact that it's one of the books of 2010! (Coming sooner or later, my 2010 Books Reviewed...)

Speaking of books, I know that I don't spend a lot of time reading while I'm away. Still, I can't help trying to match books with my trip, and exuberantly picking a few volumes, bravely fitting these inside my luggage. I might regret this when the trip's over and I've barely turned any pages, but I actually managed to make a dent in two books. One of them was Chatterton by Peter Ackroyd. It's not his most well known work, but I'd picked this book up not long after I'd posed for a photo in tribute to the painting 'The Death of Chatterton' by Henry Wallis. I know, it sounds kind of creepy, but hey, it worked for George Meredith, the model for the actual painting, who lived a long life as a writer.

The actual Thomas Chatterton, was rather fascinating. He produced what he called long lost writings from a medieval monk, and people were actually convinced for a bit. His body of work is impressive, especially considering the fact that he was only seventeen years old when he died. Some say he committed suicide, and others believe he accidentally overdosed. Either way, his life, death, and work inspired future poets like Keats and Coleridge, and even Oscar Wilde (wow, I almost burst out in a Smiths song there.) I mean when you get down to it, his death was highly romanticized, but I tend to fall prey to that sensibility here and there. So reading a novel based on this person, and those involved in the famous painting, and mostly took place in London, seemed to fit. And then, what do you know? Look what's in the Tate: 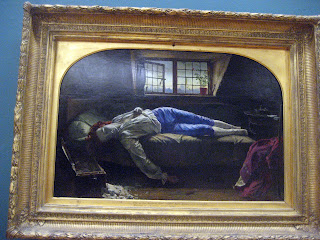 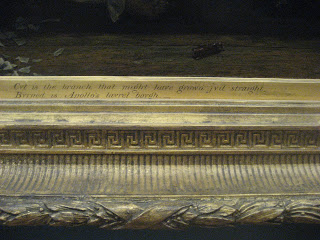 I think I must have read somewhere that the painting was here, but I was so concerned with painters like Turner, Rossetti, and Millais (whose famous Ophelia, also a death scene, I posed for on the same day as the Chatterton, and whose statue stands right outside Tate Britain), that I'd put this particular work to the back of my mind. Well, that's okay. I like little surprises. 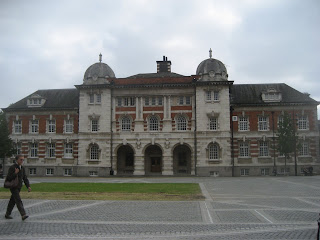 Posted by Catherine at 6:19 AM No comments:

When preparing for my trip to London in October, I brought an autumn coat, figuring it was going to be chilly. I'd only had my 2000 trip to gauge the weather for that time of year, and during that trip it'd been kind of nippy. Though I was pleasantly surprised (and would give a good deal to have similar weather on a day like today), it wasn't the worst thing that one of my favorite activities does not belong to any season. Because even when the hottest day of the year makes a tea room seem uninviting, a museum is climate controlled! (Usually)

Bonnie and I visited four museums in one week, and we possibly could have done more. But the skies were blue, and it would have been a shame to miss all that outdoor time.

The Victoria and Albert Museum (or V&A) is a powerhouse of decorative arts. There are collections of paintings, statues, tilework, textiles, furniture, and costumes from all over the world, throughout the centuries. Which means that it's kind of overwhelming to try to take it all in in just one morning. We tried, though!

Incidentally, the V&A has a great gift shop. Of course, the stuff I'd like to own from the museum is on a look, don't touch, and certainly don't take basis. Here's a few of them: 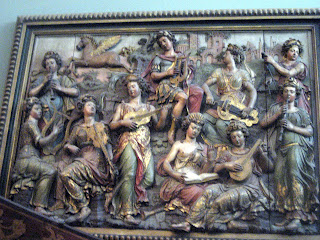 I just thought this was apropos: Apollo and the Muses 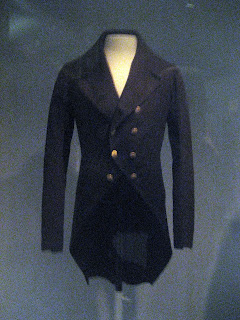 They don't make men's clothes like they used to... 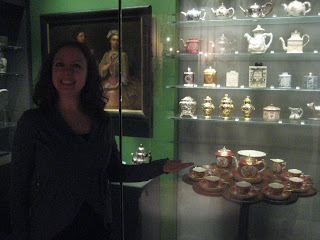 Do I even have to caption this? Wish the lighting was better. 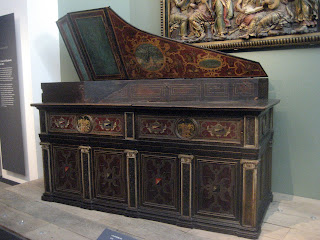 Elizabethan Claviorgan. Even if you can't play it, it'd look gorgeous in anyone's living room. Probably wouldn't fit most people's living rooms.
Posted by Catherine at 6:00 PM No comments:

When people go out for a drink with me, I suppose they assume it's gonna be something hot, in pretty china cups, and there might even be lace involved. Of course I'm never one to turn down such an outing.

But this particular Saturday in London, I'd already done the tea thing, and the museum thing...I was kind of done with my regular things. It's after dark, we're hungry so what's two girls and their cousin and wife gonna do in London? Well, we thought we'd try The Sherlock Holmes, a pub/restaurant near Charing Cross (after getting out of the station, you go through some very Holmesian small streets and there it is), but sadly it was still a Saturday night and the restaurant required reservations. Though technically we're tourists, and I'm not against doing some touristy things per se, we didn't want to go anywhere that screams "I've just spend the day taking pictures of Big Ben and I have twenty phone box tchotchkes in this shopping bag!" So we took the middle road, and found a pub called Lord Moon of the Mall that suited us just fine.

Though it was busy, we found a nice table in the back of the back room, and settled in. Then we sorted out the business of ordering food. The menu offered a good amount of choices, including items like burgers that come with a complimentary pint. Not bad. So you give your order at the bar. Now this is the part I find daunting. I've always found bars intimidating, because you have to get someone's attention over a loud crowd of thirsty patrons. I'm hopelessly soft-spoken. Situations like that make me feel like a little mouse in the corner of a dog's poker game (who came up with those paintings?) But I was hungry, and Bonnie was just starting to come down with the ailment that afflicted her throughout our stay, so I manned up.

The next step is, they serve the drinks and the bar. You carry them to your table and wait for them to bring your food. We all ended up wanting fish and chips, which thankfully did not disappoint. I didn't get beer. I hate beer. In fact, if you can find a beer that I'd actually like, the next round would be on me. Until then, I got Strongbow Cider. I'd never had this before; usually when I'm out and want cider I find Magner's, which is fine, but I'm always up for something new to me. And now I'm on the lookout for Strongbow in New York - I'm sure it's here somewhere.

Maybe we were just there on a good day, but for a place that's just down the road from Trafalgar Square, Lord Moon did not have a terribly touristy vibe. I spotted quite a few patrons that seemed to be regulars, reading their newspaper, not a tour guide, with a pint. It felt like a place people could go to and make themselves at home, though I have very little to compare with. I've been to so few real English pubs, especially the ones that could truly be deemed "locals", that I'm afraid I have little authority on these matters. Still, I do know what it's like to be in tourist traps (I work near Grand Central Station and close enough to Times Square)and I didn't have that itchy feeling here. We were completely relaxed, and spent hours just talking amongst our dinner, and later dessert. I had sticky toffee pudding, something you only see in NY in places like Tea and Sympathy. This sweet tooth loved it. And, by the way, the prices were really reasonable, something one seldom finds in London.

The bathrooms were downstairs and eerily cavernous. I expected to turn a corner and find Guy Fawkes plotters (obligatory history reference). 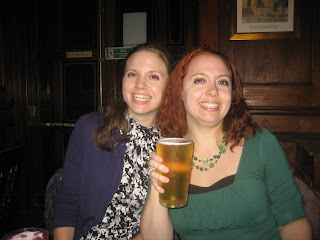 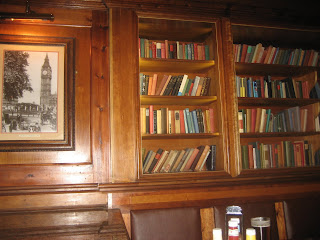 How could I not feel at home here? This looks like my apartment; just add HP sauce. 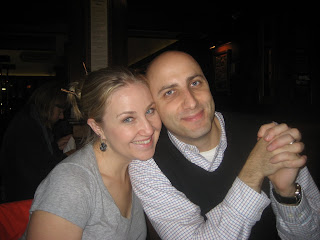 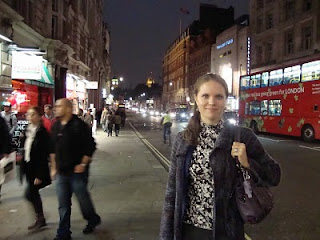 Can you spot Big Ben and the Wheel? View from the block of Lord Moon