I've been blogging for seven years.  There's been a few changes to format -  I've reorganized a little, changed the name of my main blog - and I don't post as frequently.  Even so, I'm pleased that I've kept this online record, and can look back on many tea times and whiny moments with some sense of clarity.  So cheers to me! 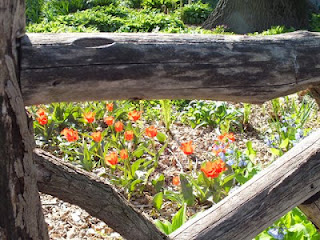 If Catherine can't come to Britain... A few months ago I had every intention of returning to Britain in April 2012.  Then other plans/money/issues/life got in the way, so I had to postpone the trip.  It was a little disappointing, but I've been learning patience in so many avenues of my life, so it's really okay.  Resourceful person that I am, I try to find mini-trips, or at least pockets of time that make me feel that I might be elsewhere.

This happened in a big way last Thursday, when I found out that Doctor Who was filming in NYC.  This almost never happens - usually they're in Wales or London, so it was bizarre to find the actors actually shooting scenes within ten blocks of my place of work!  Sadly, I only found out on the day of and didn't have my camera with me.  My cellphone has a camera, but honestly I can draw better pictures.  And I draw like a blind ape.  Still, standing in Tudor Place with a crowd of Whovians, watching 'The Doctor and Amy Pond' riding a 1930's car and running over and over again is something that won't leave my mental photo album for a long time.  Besides, plenty of people have posted their photos of the day online: I've even seen the back of my head in some of them!

Then there was Friday evening, which was mostly New Yorkish: after work I hiked to the High Line, walked most of its length, and exited by Chelsea Market.  It was a good place to take my camera, which I finally brought with me.  Then I bought some chips at A Salt and Battery and sat outside watching the interesting people of the West Village pass by.  Nearly everyone made a comment about the fish and chip shop, or the next door Tea and Sympathy.  So, close enough.

Now, I'm not a parade person.  Crowds and loud noises are things I usually flee from, and I'd done enough on Thursday evening.  But Saturday was gorgeous out, so I found myself at the tail end of the Tartan Day Parade in Midtown.  This way I got to see all the kilts without the headache.  And I do love the kilts! I did a whole paper on them in college.  Sigh.  Anyway: I love the outfit of the girl on the right. Since it's been a really long time since I've been to Scotland, it was certainly a pleasure to see this little reminder.  I'd love to go back again, especially now that I'm knowledgeable about its history, culture and of course literature.  On my one and only trip, all I knew about Scotland was haggis (which I still haven't tried,) the Loch Ness monster (which I don't care about anyway,) and that my grandfather had been born there.  I also knew some lyrics from a folk song about Bonnie Prince Charlie, but as a kid I thought it might have been about a mythical figure.  So it's time to return, but in the meantime, we get our little reminders here and there in my hometown.
Posted by Catherine at 2:11 PM 3 comments: 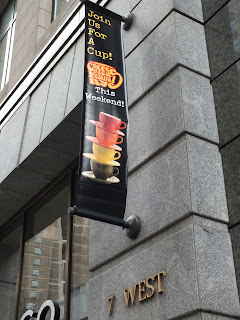 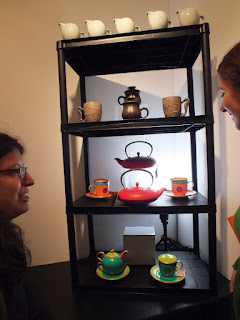 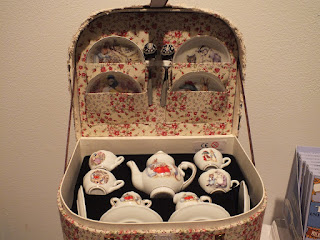 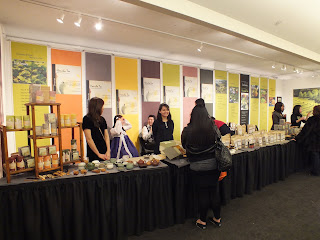 I haven't been in writing mode AT ALL lately.  In fact I haven't had such a long writing slump in over a decade.  Now I can't blame the winter, because it was one of the warmest ones on record.  Anyway, I'm trying now to rise above the block, and thought I'd get started by posting a few pics from last month's Coffee and Tea Festival.

I'd left a three year hiatus between festivals, basically because it doesn't change much.  This year it was on 34th Street, which was different, and I'd gotten a half-off discount via the Daily News (so this post is almost an Adventure in Grouponing,) so I figured why not?

Crowds are daunting, and this event was no exception.  I was almost intimidated when I came in, because the people checking our tickets on the ground floor were really tetchy.  I've worked trade shows in the past, and I know you're supposed to be a bit more hospitable, but I clenched my teeth and headed upstairs.  Thankfully on the event floor people were friendlier, but boy were they in abundance!  So this introvert made a decision to focus only on the tea promoters.  Coffee's been doing a number on my system lately, and this way I wouldn't find myself in the middle of a barista competition.  I mean, I like a well made cup of anything, but it's not exactly a sport!  But I'm grumpily digressing.

The lectures were in a separate area, but they were too crowded too.  This narrowed things down quite well for me, and I found myself finally enjoying myself as I sampled many kinds of cookies, biscotti, cheeses (thanks Cabot!) and of course teas.  I tasted tea from the Azores, which I'd never heard of before.  The closest I got to a coffee tasting was from teabean, who bakes coffee beans and infuses them with tea.  Weird, but not bad.  My favorite tea, I'd have to say, was from Best International Tea.  They had an English Breakfast tea that was just perfect - buttery and delicious, strong but didn't need milk.

So, not a bad time, but not something I need to do every year.  It took me nearly two months to write about it, but there it is.  Maybe it's the kickstart I need (besides a good cup of tea.)

Posted by Catherine at 6:12 AM No comments: