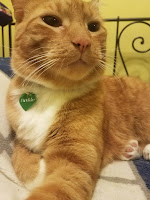 When I envision an ideal living situation, it's usually in a cute cottage surrounded by a manageable garden and some wildflower space. The cottage has a baking-friendly kitchen,  is stuffed with books and cozy reading nooks (at least one window seat), and there's at least three cats in residence.

I have the books in my railroad apartment in Astoria,  plants that tend to die, and have had up to three cats at once in the past. I also have mild allergies and a budget. So I've been down to Zenobia for five years now.

It wasn't a bad arrangement. Zenobia is friendly (to me), and playful for her age.  I'm sure she would be fine with keeping it just the two of us.  But lately I was drawn to the idea of having another kitty, preferably a boy,  but not a kitten.  I'd also never had the chance to adopt a cat from a shelter. So I took to the internet, and found a local spot that didn't make you give blood in order to adopt.

There are always adoptable dogs and cats in shelters, but a match is not always easy to find.  For instance, on my first visit there were some bonded pairs, which basically means you have to adopt them together.  I think that's wonderful, but I'm not up to having three cats at the moment.  It was okay with Bubuck and Moofer back in the day, but that's because Zenobia was young and she'd already met them both.  I didn't want to overwhelm her (or my above-mentioned allergies and budget).

I didn't find my match on my first visit, but I didn't give up.  On my second try, upon entering the cat room, the first kitty I spotted was not in one of the cages, but a little room near the kitten area.  As soon as I saw the big ginger lounging behind the glass, I asked about him.  The volunteer said 'that's Frederico', and I had to know more.  So she took me inside.

'Frederico' shared the room with two other kitties names Sylvester and Tweety.  Neither of them seemed interested in me, but Frederico approached straightaway.  And sparks flew. No, literally.  It was cold out, and I gave the poor guy a little shock as he went to sniff my finger.  But he was obviously social, and I fell in love.  The volunteer read his history: he was an owner surrender, which was all I knew about his previous life.  That and he had ingested dental floss a few years ago and had to have it surgically removed.  And he was seven years old.  That was a little older than I'd expected, but I figured he'd be much calmer than a kitten, and Zenobia would appreciate that.  He also had a slightly scrunched left ear, but there weren't any health issues related to that.   I wanted to hear his voice, but all he managed were the little rrrrp and mrrr sound effects, which probably sealed the deal.  Any cat who simultaneously reminded me of Cinnamon and Moofer was okay by me.

The adoption process takes time, so I had to return the next day.  I arrived at opening time with my carrying case, and after some consultation and paperwork, we were off!  I took him on the bus, which I thought would be an easy ride as it was midday.  I was wrong, but I was also impressed by how quiet he was.  Zenobia would have been in an uproar! (not that I'm comparing...)

I'd hoped to get him into the front rooms without any fuss, and keep the two cats separated for a few days, but before I could take my coat off, Zenobia was at the carrying case sniffing, then hissing, then wheezing dramatically. I spirited him off to the front rooms, shut the doors, and let him sniff around.

The first day and night I had a quiet boy who hid under the bed and had a normal appetite, and was cuddly when I came to visit him.  I still spent as much time as possible with Zenobia, as I wanted her to feel like I hadn't forgotten her in favor of a younger model. I was starting to regret my new name for him: Freddie Purrcury.  I thought it would be an easy change from Frederico, and a chance to finally name someone after my favorite singer.  With the ear and the ginger fur he could have been Vincent Van Gogh, but that didn't roll off my tongue.

By the second day Freddie had found his voice. And he used it!  He was no longer satisfied with two rooms (bigger than quite a few New York apartments, but after all, his namesake had lived in a mansion in Kensington.  Now, I like the sound of little kitty mews, and the occasional howl, but I also suffer from a mild but nagging case of misophonia, and persistent yowling and door scratching was interrupting my beauty sleep.  So I did what has always worked when faced (or eared?) with a snoring roommate: kept the TV on full blast.  It's loud, but it's my choice, and I was able to rest somewhat.

After a couple of days, I brought the kitties together.  Zenobia's first response was a repeat performance of wheeze-fest.  Then the hissing commenced.  This was not a love match.  In fact, it was a crisis.  She stopped eating for a couple of days, lost weight, and found herself back at the vet.  She will be okay (for now), but I reminded her she was a century too late to protest for women's votes, and got her all her favorite canned food.  And I let her tell me where she wants to eat.  Yes, she's spoiled, but she's earned it - and at last she has the evil sound effects to complement her resting death glare.

As soon as Freddie had a chance to explore the whole apartment, I learned that he truly is a combination of many of the boy cats I've known:  he has the high jump of Cinnamon (and the sudden poofy tail), the little grunts and love bites of Moofer, the ability to find and tear through any package of cat food, cat nip, or treats that is not put away under lock and key, like Moofer and Bubuck, and the weird face licking of Chubby (my fur "nephew" of old).  Maybe girl cats do these thing too, but not the ones I've known.  Zenobia scratches furniture (and Freddie scratches the furniture Zenobia doesn't bother with, like my swivel chairs), but she's never been terribly curious about every space in existence.  She's not even a window cat.  Freddie is, which I wouldn't mind, except he nearly ended the household by turning one of the stove knobs on his way to a kitchen window.  It's a good thing I have a sensitive nose!  So I'm on my toes.

Freddie has been part of the family for nearly a month now. Aside from learning to deal with his active nature  and morning caterwauling, and Zenobia's demonic noises (they get more and more creative), I've loved having another kitty at home.  Now I just need the cottage.