So I finally received my Victoria magazine. It's been over 4 years in coming, so of course I was excited to see its glossy cover peeking at me through the mailbox. Of course, I wasn't extremely pleased with the Christmas tree on its cover, and the fact that holiday articles take up a great deal of the November/December issue, but I'm sure I'm in the minority with the other readers. After all, it was Queen Victoria herself who, through her marriage to Prince Albert of Saxe-Coburg, popularized the Christmas tree in England and beyond. I guess Prince Albert was to Christmas trees as Catherine of Braganza was to tea.

Holiday gripes aside, it was nice welcoming Victoria back into my home, after so many years of change and growing. There's an article about antique clothing, and one about a writer who prefers old-fashioned instruments of writing to the more technological methods of nowadays. This article especially appealed to me: even though I write often using my laptop (hence, this blog,) I always enjoy sitting down to a journal of fine paper and a fountain pen for my personal journaling. I sort of miss writing letters via post, too. The magazine's the same, down to the calling cards section and the complicated recipes.

I'm feeling cozy all of a sudden.
Posted by Catherine at 7:31 PM 4 comments:

The Golden Age? Not of History!

I went to see the new movie about Queen Elizabeth - or should I say the Cate Blanchett sequel. I like Ms. Blanchett, and her portrayal of the Virgin Queen. I love a good costume drama, too. I just need to keep my Historical Accuracy Hat at the door.

Throughout the duration of the movie, I kept wanting to look around the audience and ask, "you do know that's not really what happened right? Where is Robert Dudley or the Cecils? Why all the focus on Raleigh?" (not that Clive Owen is difficult on the eyes, but my head throbbed with all the historical incorrectness.)

It's like someone took the Elizabethan timeline and mixed it up a bit. Well, a lot. I'm sure it made the story all the more interesting to the unknowing viewers, but anyone who's read at least one biography of the first Queen Elizabeth would have a really hard time getting past the loose ends. Not to mention the annoying astrologer scenes - they really could have done without that.

I would recommend this movie to those who are not perfectionists about facts while watching a "historical" movie, the way I'd recommend "Becoming Jane" to all the folks who think the newest "Pride and Prejudice" was faithful to Austen's most famous novel.

Can't help but love the costumes, though.
Posted by Catherine at 10:37 PM 2 comments:

Down But Not Out

I really need to focus on one thing at a time - and to realize that I can't fly. I know I certainly can roll - ungracefully down the 59th Street subway stairs. My shoe decided to stay behind and the rest of me went down. Thankfully nothing was broken, more like pulled. I guess this week my Jane Austen character is Marianne Dashwood, minus Willoughby. Still, I need to wear sneakers for the next couple of weeks, and not take long walks in the cool weather. Of course it's better than crutches. The bonus is I have my very own x-rays of my left foot, at least one of them. Because of needing the x-rays, my heel spur has been confirmed - told you guys I wasn't being a drama queen hypochondriac!

Just in time for autumn, Panera Bread opened in LIC, a walking distance from my home (well, a bus ride for the next couple of weeks.) I got to have lunch there today, and it was quite cozy. The soup and sandwich were real nice. The iced green tea was just as I'd remembered it. Normally I wouldn't like sweetened green tea, but there's something about iced tea that suggests sweetening. They serve hot Republic of Tea also, which isn't too shabby either. Can't wait to try the souffles. Marie raves about them.
Posted by Catherine at 11:16 PM 5 comments: 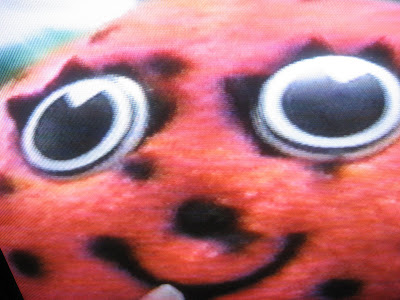 Why is it so hot out this week? It's October! It's New York! I put the A/C on today! This is just not right. All my fall clothes are waiting patiently in the back of my closet, and I had to give myself a pedicure so I could continue wearing sandals. I considered going to the beach today, but I'm really not sure if it's open so late in the year. It should be. I did end up baking twice this weekend. Although it's too warm for all that, I really need to get practicing before the actually cold months when I finally pull together a tea party. It's hit and miss, though. I made fantastic cupcakes, but horribly dry peanut butter cookies. I know, its got peanut butter in it, but still....maybe I shouldn't have used that organic stuff. I try to be healthy and satisfy my sweet tooth, and I can never strike a happy medium.

I guess I'll just have to be content with the crunchy leaves on the ground, while I endure a few more tan lines.

Global warming, anyone?
Posted by Catherine at 5:42 PM 4 comments: