Henrietta Sees it Through and a Pairing

This is the review I posted on Library Thing:

Reading stories written in epistolary form makes me yearn for the old letter writing days, though I don't think I'd have been thrilled to live in England during the last years of WWII. This book is a sequel to the first series of letters, which I haven't read, but I picked up the pace quickly enough.

It's a combination of tongue-in-cheek and stiff-upper-lip that only the English can master. Henrietta is a middle-aged doctor's wife. She is not the most conventional woman but she tries to carry on amidst the ridiculousness of wartime. She tends faithfully to a garden, puts up with evacuees and difficult neighbors, and finds solace in her friendship with the wonderfully full-figured and elderly Lady B.

It's my second Bloomsbury Group Early Reviewers book, and this one did not disappoint either. Even though there is some tragedy here and there, and a harrowing story of a cat and a mouse that echoed my own trials of last week, every letter ends on a cheeky high note.

From what I've read, the Henrietta stories were semi-autobiographical, a way for the author to cope herself. Hope it helped.


I finished this book last week, and in trying to think of a tea that would pair well with it today I kept coming up with herbals, since that's all I've been drinking due to a nasty head cold. Then I remembered a humourously illustrated scene in the book where a woman is bring an Evacuee staying at her home Blackcurrant Tea because they had a cold. She ended up taking a nasty spill on the stairs, ending up in a 'Crumpled Heap'. I'd hate to think of what happened to the teacup. So in sympathy to all involved, I'd say a nice Blackcurrant would do quite well, whether it's a black flavored or a tisane.
Posted by Catherine at 2:06 PM No comments:

In Astoria? In which I mention many local businesses...

I passed by the site of the former Himalayan Tea House, the place that had a decent menu but not much else, not to mention crazy hours. I don't miss it like I thought I would. Besides, with places like Bare Burger and Il Bambino right there, I almost didn't notice it was gone. Even so, its absence has especially impressed in me the need for a proper tea place in Astoria. Now when I say Astoria, I am referring to my neck of the woods, near the heart of Steinway Street, a quick walk from Woodside and Long Island City.

Speaking of which, Cafe Triskell (best crepes in town and a nice tea menu) and Panera Bread are close to my criteria, but they're straddling LIC, and Martha's Bakery is bit of a walk away for me on a rainy day. Gian Piero's is nearby, but for me that's strictly to go; some of the clientele are dirty old mannish. And therein is another problem with my area: they're either patronised by hipsters or men who just make me feel uncomfortable. So what's the compromise? Starbucks? I'm not anti-Starbucks, even so, it's Starbucks.

There are other places I like in roll-out-of-bed walking distance from me, but they lean toward brunch and full-on meals, and I wouldn't feel comfortable just getting tea and cake if that's all I wanted. Is that just me being insecure? Maybe a little. But speaking of which, there's still a few surviving diners/coffee shops nearby, but heaven forfend you come alone - it's the counter for you! I loathe dining at the counter, especially alone.

So what's the solution? Can someone open a little place near me that would satisfy my tea needs? It really doesn't have to be frilly - that's also intimidating...not for me, but I'd like a good variety of people to be comfortable in this mythical place. Something like the former Shane's Bakery in Woodside. They had scones, people! It was like the Irish Tea and Sympathy. Why did it close?! Even if it was still open, it was still to far away from me.

I guess this post is a bit of a rant, with a touch of daydreaming. You just can't have it all. I mean, I waited for years for someone to open bookstore/cafe in my neighborhood, and with the closing of a bunch of Borders, this looks less possible than ever. I will sigh now, and wait patiently for suggestions/recommendations.
Posted by Catherine at 7:34 PM No comments:

Cozy Mondays? and a Pairing

After a relatively busy and responsible weekend, I decided to have a relaxing Monday in. One bonus is that finally it snowed on a day off! It wasn't a crazy snow day, but I'll use it as an excuse to be indoors and cozy.

It started off quite well. I caught up on some reading, and then I popped in a Sherlock Holmes (Jeremy Brett) DVD to watch an episode I hadn't managed to watch in years. So far, so good. Then I noticed Zenobia stalking a corner and I knew the end of relaxation was nigh. If it had been a waterbug, I would have screamed of course, but it would've been quick work. But a smart bug in trouble would've climbed up the wall to get away. Nope. It was a not too smart little mouse that put me through a wild ride, and was later to give a run for a supportive friend's money too. Let's just say it was not a pretty sight, and I got to demonstrate my awesome screaming skills. I know none of this rests with reason: I live with two much larger creatures every day, and Zenobia's the same color of the dearly deceased critter, complete with claws. Anyway, the whole fracas cost me at least three hours of my cozy day.

Holmes ended up being therapy afterwards, and put me in mind of a book I read this month, The Sherlockian by Graham Moore. A new member of an exclusive Sherlock Holmes fan club investigates a murder of another member, who just happened to have recently announced he'd found the lost Arthur Conan Doyle diary. This plot takes turns in chapters with an investigation Doyle gets involved in at the time of the missing diary, along with his friend Bram Stoker, who hasn't yet found fame with a certain horror novel that didn't require glitter. Jeremy Brett was mentioned once, which was enough reason to keep on going. People who both enjoy Sherlock Holmes stories or are avid fans of any writer would likely have fun with this book. I mentioned this in another review, but I'll repeat it here: there was a conversation between a man and a woman about the nostalgic fascination with past times. I've watched episodes of Brett's Holmes and drooled over his study and the morning coats along with the clip clopping of the horses on the cobblestone and yearned to experience that time period for myself. The point raised in the novel I'd considered myself: it wouldn't have been as fun for a woman. You'd have to wear corsets and put your hair in those updos...if you're fortunate you might be Mrs. Hudson! 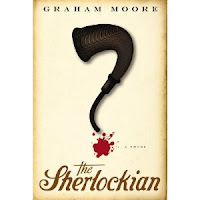 After a nervewracking game of Caths and Mouse, however, I might just settle down with a cup of peppermint tea.
Posted by Catherine at 7:11 PM 4 comments:

I'm an indoor person, though I like my nice long walks. This time of year I am even more firmly ensconced, curled up on a sofa as far away from the piles of snow as I can get...whenever I can help it. Time to catch up on my reading! And what better accompaniment to a good book than a soothing cup of tea.

Though I'm not the ultimate wine or even tea pairing expert, I like to think every book has its perfect tea match. I haven't done too many book reviews here recently, so I thought I'd kick start it once again with a tea/book pairing series.

The Brontes Went to Woolworth had gone out of print for a while, but was reissued last year. I'm glad it was. Though certainly not the most realistic plot I've ever come across, it was really charming. It centers around three sisters, who develop whole stories around imaginary friends. These friends are mostly real people who they've read about in newspapers, or saw in a role of public office. They develop their own little fan fictions around these people, mostly for the benefit of the youngest daughter.

As a middle child of an imaginative family of three sisters, I felt right at home with the Carnes. I'm not sure everyone would be comfortable with the idea of how believable their made-up acquaintances were to them (though some were, in fact, living breathing people, as we get further reminding of as the story goes on.) I loved it, because in a way I can identify. As a child, I saw a photo of a bank president, gave him a whole new name and pretended he was my husband. It's a mystery to me why I chose him, but that made the Carnes so relatable to me. Those who can't relate could commiserate with the poor governess, who just doesn't understand what's going on, and why the girls indulge themselves in fantasy to that degree. For a moment, actually, the point of view threw me off, as it began with Deidre's (the middle girl) first person, then occasionally moved to third with Miss Martin and others. After a while I got into the swing of things.

The story gave an answer to a number of "what ifs" I confronted when transitioning from childhood into adulthood. Also, without giving away any spoilers, coming from a less innocent time, I almost suspected something sleazy would occur between the daughters and the object of their imaginings. I'm quite glad I was wrong.

A highly lighthearted but not entirely sugarcoated read.

As one of the sisters' real life imaginary friends was a judge they affectionately called 'Toddy', I recommend a hot tea toddy, perfect for a cold winter's day and with just enough kick of rum to add to the whimsy of it all. If you're a teetotaller, you might try a nursery tea, with lots of milk and sugar.
Posted by Catherine at 11:00 PM 4 comments: