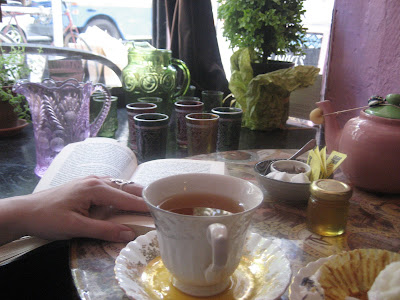 I know I've had lots of moments worth writing about this week, but I've been kind of stressed by other matters to be able to concentrate. I hate "issues", but I guess everyone has them sometimes. I shall try to focus on the positive.

On Sunday I set out for Trader Joe's, but since it was such a nice day I decided to first walk around the area. I visited Sympathy for the Kettle, which I haven't done since December. There was an actual empty table right by the window! This is amazing, as the wait is usually long enough to give up. As I ended up staying for an hour and it's a small tea shop, I can see why the tables are so hard to come by. Well, it was worth the wait I didn't have to undergo this time. I had a tea called Love Rosemary, which is a flavored black tea with violet and rosemary (ya think?) Then there was the bergamot cupcake with lavender icing. I've said it before, but if you are ever in St. Marks Place and want a peaceful respite, this is the place to go.

Monday started out as an extremely rainy day, and ended as a drizzly day. Thankfully it was calm enough out when I went to Partners & Crime, a bookshop in the West Village that happened to be hosting a Jasper Fforde signing. Though I arrived in time for standing room only (I actually came in right behind JF, but I swear I'm not a stalker!), it was fun enough to hear him give his description of the book and answer questions. He's really funny, and positively in love with reading. Though he worked in the film industry for a good portion of his life, he does not want the Thursday Next novels to become a movie. I'm glad - I think it would ruin the spirit of the books.

After I got yet another book autographed (though this time I looked like ten miles of bad migraine so I didn't take pics), and asked him a question about Swindon (the travel agent of Gata Past bubbling to the surface yet again), I walked along Greenwich Avenue. I stopped in Carry on Tea and Sympathy and was mind blown when I found out there were products from WHITTARD!!!!!!!!!!!!!! My goodness. This is besides being surrounded by all kinds of things you can usually only get in England, along with some things you can find in Irish import sections in Astoria. Then I bought some chips at A Salt and Battery to end my completely Anglophile evening.

I finished First Among Sequels in two days. That's probably too fast, or perhaps I'm a Superreader (referring to something in the book.) Well, I thought it was hilarious - maybe too many things going on at once, but still a pleasure for anyone who loves literature, time travel, alternate realities - that sort of thing. Sometimes my mind started to get a little loopy when I tried to make sense of something, but then I realized that you have to go for the ride without taking it too seriously. Good stuff.
There's another pretty decent side effect to reading a Thursday Next novel. Usually when I read books that take place in England, I feel a sort of yearning to go back. It's not a negative feeling, but kind of frustrating given my financial circumstances. The thing about these books is that more than anything, it makes me want to read more books. This is not a problem, as I have an endless amount of books to jump into.
Now all we need is a tea quote from the book. Here we go:
"There are three things in life that can make even the worst problems seem just that tiniest bit better. The first is a cup of tea - loose-leaf Assam with a hint of Lapsang and poured before it gets too dark and then with a dash of milk and the smallest hint of sugar. Calming, soothing and almost without peer. The second, naturally, is a hot soaking bath. The third is Puccini. In the bath with a hot cup of tea and Puccini. Heaven."
I may not be a Lapsang fan, but that was enough to give me second thoughts.
Posted by Catherine at 6:12 PM 8 comments:

Tea With A Buzz 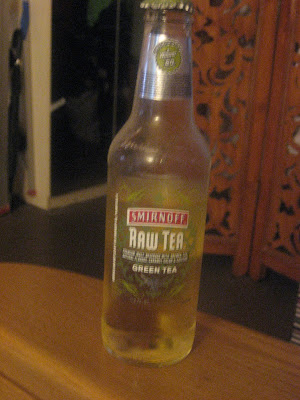 So everyone who knows me knows I'm a cheap drunk. Well, actually, I don't get drunk. I get tipsy really fast so I stop before I get even close to risking a hangover. I limit myself to stuff I can handle, like Smirnoff Ice. Even that gives me that sleepy feeling earlier than I'd like. So I was interested in trying their Raw Tea. It's got caffeine, which keeps me awake just a little longer. I guess it's the poor man's Red Bull with Vodka. You guys do know that Long Island Iced Tea does not have actual tea in it, right?

Even this drink, however, is something I need to be careful with. It tastes basically like iced flavored green tea. Its slight liquor content doesn't kick in until later. So I have to make sure not to drink it quickly. Like tea, it must sipped.

I tried the new Snapple Iced Earl Grey tea. It was sweet, but not overly so - in fact, there are far fewer calories than their other iced teas. I guess they felt they needed to step up a little, what with Ito En's line expanding bottled iced teas (they sell it in the pharmacy on my block - and here I was two years ago searching frantically around the city for just one of their flavors!)

Here's the thing: I used to hate Earl Grey tea in any form. I drank it daily during an early internship where everyone in the office smoked, so when the internship was over it was a dreadful association for me. It's kind of the negative Madeleine, I guess (see the Lushing comments) - but for the life of me I couldn't go near Earl Grey. My Dad took a liking to it and starting drinking it every morning, and since I didn't loathe it the way I do tomatoes I put up with it. I drank Twining's Lady Grey tea here and there, and liked it for its lightness. Gradually I was curious to try the Earl one more time, and I realized it was to my liking once again. So I really don't mind Snapple's efforts.
Posted by Catherine at 8:20 PM 3 comments:

Here are a few examples of tea gifts I've received over the years. Actually, most of these are recent gifts. The white teapot with flowers, though, came almost ten years ago to me from a coworker of my brother-in-law. I'd only had one conversation with her at the time, and I must have been enthusiastic about my love of all things tea. These are certainly not all the tea related gifts in my collection. I'm certainly thankful for all of them. Perhaps I'll make a Part Two of this feature.