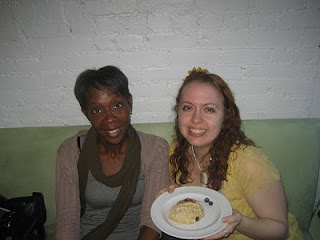 Teany closed last June due to a fire, and I was anxiously awaiting its reopening. Sometimes a shop or restaurant just cuts their losses, and that's the end of them. Well, when I heard Teany reopened in April, I was dying to return. It's like seeing an old friend after too long a time apart. Well, I finally made it back about a week ago, with another Teany fan, Cathy (there's lots of us out there, and most of us seem to like tea.)

We'd done a good deal of walking that evening. It was also our first time visiting the High Line, a blossoming park built from old elevated train tracks on the west side. I should share those pictures also. Not now. Needless to say, we were ravenous and tired of walking (well, I was. I'd done quite a bit of urban hiking before we met up. I'm not complaining, I love it.) When I suggested Teany, Cathy's eyes lit up and I knew it was Time.

Teany looked slightly different in the inside, but not in any extreme fashion - again, like an old friend who'd changed their hairstyle slightly. There was still the eclectic mix of music playing over us, and the funny-looking miniature robots. The tea menu was voluminous as usual. I asked for a cheese plate with fruits and nuts, and a blueberry scone. It was all very good, though the glaze on top of the scone may have been a tad sweet. I was only let down by the fact that they were out of the Teanychino, which I'd been craving. I had the Chaider instead, which was okay but too autumnal for June. The server was a friendly guy who seemed kind of new, but I'm sure he'll get the full hang of things.

I was surprised by one thing, though. I overheard a person at the table next to us ask for the Afternoon Tea. The girl behind the counter said that Afternoon Tea ends at seven. Although I'd decided against it for this visit, I thought it was kind of weird. The online menu says it's available all day. That seemed kind of lazy. I can understand if they were about to close for the night, but I'm pretty sure they close at 1 AM. We were there around 7:30 PM. Do the math.

Hopefully the inconsistencies will be ironed out by my next visit. You know I gotta have me some three-tiered action! 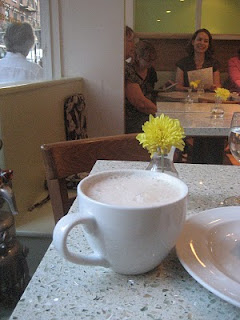