I've been going through some old VHS tapes. I've been able to get rid of some, but I usually have to watch or at least fast forward over the whole tape before I can determine whether it's purge worthy. It's kind of funny to see what TV shows I was really into in the past (about 7 - 9 years ago, to be exact), though sometimes it's embarrassing. I mean, why did I tape every awards show in the year 1999? Toss!

Watching old commercials is fascinating to me. Often I see products advertised that are irrelevant nowadays. One type of ad that seemed to flood the late nineties was for collect call companies. From 1800-Collect to Dial 10-10-220, every other commercial was about calling home. In fact, celebrities (especially SNL alumni) were featured in almost every ad. I know people must still make collect phone calls from time to time, but you really don't see this being advertised anymore. I wondered why for a moment, then I remembered the year I got my first cell phone: 2000. Though I'm usually technologically behind the masses, I do recall cell phones only being owned by a few friends of mine in the nineties. In fact, it was still considered rude to answer your phone when someone called you in a restaurant - it made you look kind of superior I guess. Now, of course, it's nearly taboo to not be reachable 24/7.

Collect call companies may not be completely obsolete, but they are certainly out of our collective consciousness. I don't miss the annoying ads. Besides, now we have Head-On, the product which soothes migraines while their commercials cause them. Ah, welcome to the future!
Posted by Catherine at 9:54 PM 3 comments: 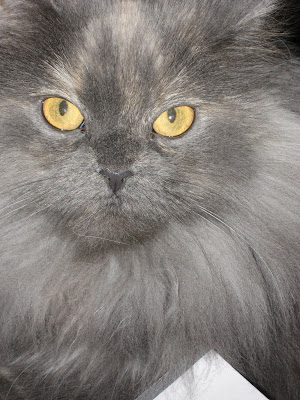 Not My Cup of Tea

One morning I was in the mood for iced tea, and settled instead on a mate "tea" from Bombilla Gourd. It set me back $2.60, which to me is a lot for bottled iced tea (even Teany charged $2.50), but I was feeling experimental.

Now, I've had yerba mate before, and it wasn't really appealing to me. I figured I'd try again, and thought that with its peach flavoring and sweetener, it couldn't be that bad.

It wasn't that bad, I mean it wasn't horrible. It just wasn't good in my opinion. I tried to like it, but it left me with a bitter aftertaste, and the feeling that I was drinking dirt. I know I like pu-erh tea, which definitely tastes like soil, but that tea stands on its own and mate doesn't stand up to my taste buds.

This doesn't mean that nobody will like it. It just means I tried to be fair and my verdict was meh.

A positive note: it's stimulating in a healthy way. It's got caffeine and theobromine, the stimulant in dark chocolate. Well, that's what the label says anyway.
Posted by Catherine at 9:20 PM 1 comment: 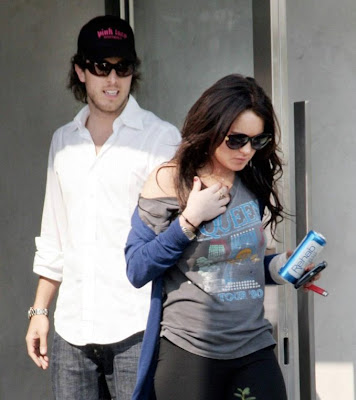 I'll bet you never expected me to feature a picture of Lindsay Lohan here, but today is a special occasion. Well, it is for me anyway. I'm a little strange in that I have an ability to remember the exact date something happened, maybe not for everything, but for quite a lot. The 11th of April was the day I first became a stark-raving Queen fanatic. Though I've toned my fanaticism quite a lot in recent years (and filled it with my love for tea, cats and history), 15 years later it's still a royal passion of mine.
The above picture was actually taken months ago, but I just ran across this getup today while thumbing through the UK InStyle. I was not the happiest magazine browser at that moment. I have no idea what Ms. Lohan feels for the band, and I must admit my Queen thing was born on a day spent in Long Island, but it still bothered me. I just don't like associating Freddie and Lindsay together. I do like the tee, though I'm not a t-shirt wearer. Unless, of course, it's a "tea" shirt, ha ha ha.
Like I said, I don't know anything about LL, and I'll probably keep it that way. But, please, any of you slaves to fashion, Please don't wear rock tees unless you love the band. My Beatles tee-wearing Floridian friend is at least a Beatles fan.
If the rest of you are just wearing a tee for the whole bandwagon thing, beware. I may stop you on the street and ask you to sing a few lines from the group's song.
Anyway the wind blows......
Posted by Catherine at 9:26 PM 3 comments:

I've never been to Toronto, but if I ever get a chance to visit, I'm gonna check out Tealish, which derives from an already hilarious expression. Did you ever hear someone describe their food as delish? Well, it cracks me up, anyway.

Go back to whatever you were doing.
Posted by Catherine at 10:28 PM 1 comment:

Mr. Strawberry, in case you forgot 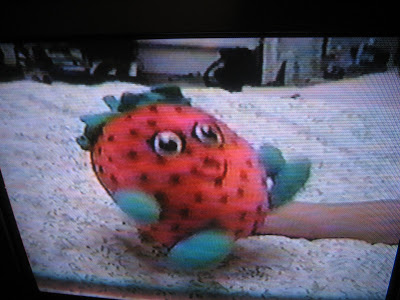 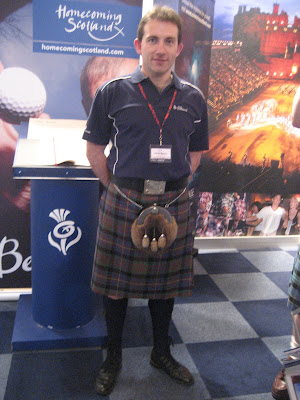 I had a little Highland fling this week...well, not quite. It's Tartan Week in Grand Central Terminal. Every April in Vanderbilt Hall there are sections of Scottish Specialities, from kilts to links to bagpipe music. It's all there, complete with musical performances and chances to win special trips to Scotland (like I'll ever win...)
My favorite section this time around is the food. I know, you're thinking, Scottish food - blecch! While I agree I wouldn't live on a diet of haggis for sure, there are certain things, mainly baked goods, that are wonderful. Rumor has it scones were invented in Scotland, and for a certainly there's always shortbread. Big surprise - as long at the teatime food is good, I'm all for it.
Speaking of tea, I bought a heather flavored black tea, and can't wait to try it. I've already tried the Summer Fruits Conserves (preserves) from Gillies. Just perfect.
There's a lot more to see in The Scottish Village, and there's something about the kilt-clad men that I find endearing. There are other Scotland related events around the city this week, but I probably won't be able to see it all. Still, it did get me in the mood to go back to Scotland. It's been 13 years already. I don't want another decade to go by before I return.
Posted by Catherine at 9:39 PM 2 comments: