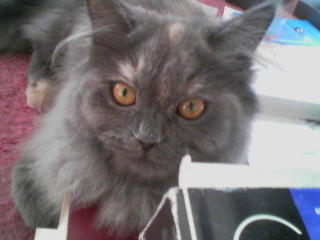 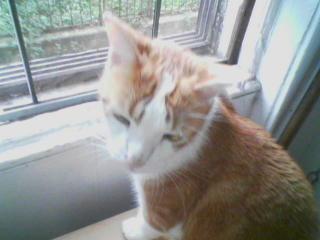 Occasionally he takes a swipe at her, but she usually runs away. Someday she may fight back, the way Duforth did, causing him to squint and cringe whenever he saw her. Till then, she seems to be the cautious one, trying not to get in his path. Why can't everyone just get along?
Posted by Catherine at 1:17 PM

like a feline Walter Matthau. HA! best line ever.

This is what I am talking about when I say your a good writer. You have a way of making an ordinary story interesting. You've pulled me into the drama of your cats lives.

Zenobia looks like a tiger! Ha. And yes, Catherine, you do have a way with words. You can write about a can of beans and it will sound interesting!

Sino looks like a kitten. Oh he's so cute. Your next blog, as an experiment should be about a can of beans...I bet you'd make it funny ( you're the funny one )