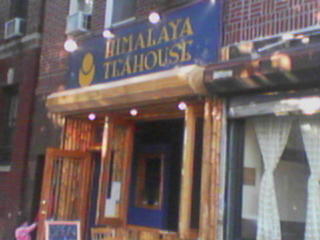 I must say I was floored when I found out there would be an actual tea room in my own town. The only thing surpassing this pleasant surprise was the fact that they use loose tea in real teapots! Shock of all shocks! I don't have to walk to Woodside or Flushing anymore; even better, I don't have to jump on the 7 train.

The Himalaya Teahouse is on 31st Avenue, which is a bit risky since it's the avenue least likely to be called a restaurant strip in Astoria. Still, it makes for a more peaceful experience. The inside is painted in dark blue and yellow. Usually the lighting is rather dim, but the staff occasionally adjust the lighting so one can actually read the menu. Generally I prefer a light situation I could read a good book with, instead of giving me the feeling that I may have stumbled into an opium den.

As for the menu...I love love love, and maybe I love, the fact that there is a wide variety of tea. Black, green, oolong, rooibos, flavored, herbal, iced, they got it all. Hot tea is served in Yixing teapots, which stay hot for quite a long time. As for iced tea, I recommend the matcha lemonade. It makes Starbucks' version taste like cod liver oil in comparison! Starbucks is no match-a for this place (wow that was corny), except when it comes to the food department. The dumplings are just fine, probably the best food on the menu. I haven't tried the soup yet, but I'm not usually up for soup when I'm already drinking hot tea. The soy beans in their pods with sea salt sprinkled on top....not really. Overpriced and incredibly boring. Finally, the dessert. It's some kind of flat pastry crust thing, perhaps reminiscent of what comes of baking in the high altitudes of the Himalayas. It tastes fine, but when it comes to tea treats, I feel an Oliver Twist line coming on.

The staff is friendly, no complaints there. The server, I should find out his name, told me they may have butter tea available soon. Sounds gross, but I must try it once.

Overall, I really like the Himalaya Teahouse, and hope it stays open! A few finger sandwiches might help, though.
Posted by Catherine at 1:31 PM

i think you should become a restaurant reviewer (or at least a teahouse reviewer!). i too wish they had a dessert menu. but it's forgivable considering the tea and ambience. it's definitely my new favorite place to bring people to eat/hang out.

I loved your review. You are hilarious, especially the Oliver Twist line...

Anyway, I must go visit there and have tea one day. Liked the pic.

Anonymous said...
This comment has been removed by a blog administrator.
4:10 PM