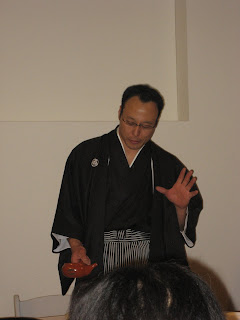 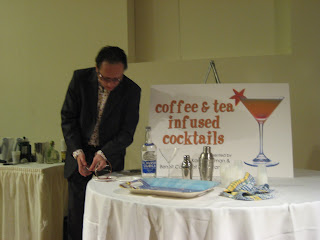 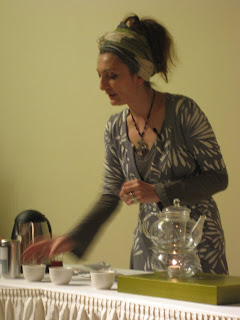 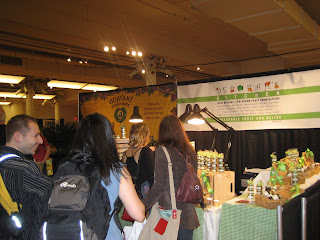 Next was a very lively presentation about making coffee and tea cocktails. At this point I'd managed to grab a seat in the front, which made it all the more enjoyable. What many know about me (or are beginning to learn) is that besides the placid pick-me-up of tea, I am also enamored of the exciting combinations available in cocktails - and the need for restraint. The kind of good thing about these drinks is that in restaurants and other venues they tend to be pricey, thus limiting me to one if any. But I love to watch these being made, especially when the bartender is creative. Kara Newman gave the presentation, along with Benoit Cornet of Sanctuary Tea - sound familiar? Though my first visit to Sanctuary T out of necessity excluded my ordering a cocktail, I was more than happy to sample Mr. Cornet's creations at the festival. I was not the only one there who had a good deal of fun at this point. I also managed to get a complimentary bottle of a coffee Bailey's type liqueur called "Cafe Boheme". It's a creamy delight.
Following this was a more toned-down talk by Ellen Easton, called "Afternoon Tea for Fun and Profit". I thought it was helpful because some people don't know what they're getting into when trying to open a tea room. She suggested getting experience both in the restaurant and retail industries. That's a good idea, because people who are into tea think they'd like nothing more than to open a tearoom - that it's so much fun. Well, there's a lot more into having such a business than a love of tea. The same goes for opening a bookstore I'd say. Well, I have no such aspirations, but there were good ideas for future tea parties. The history of afternoon tea is fascinating, but most of it I was already familiar with. I would like to try Lady Mendl's tea room now, though.
Next was a part about blending teas, from Tay Tea's Nini Ordoubadi. I loved this, mentally comparing her to an alchemist, though my passion runs deeper for tea than gold. Basically she showed the simple way one can test different mixtures of tea and dried fruits and herbs, to determine what truly blends well together. As someone who has sampled her product, I must say she knows what she's talking about. Tay Tea is based upstate, making me visualize a big kitchenlike studio full of white tasting cups and glass teapots with windows overlooking the lush mountainous countryside. ~Sigh~ but thankfully it's the best part of springtime in NY, where even in the crowded Chelsea streets one can enjoy the blooming trees and return of greenery.
I digress. There was a great deal of purchasing on my part - mostly gift items, as I really do have too much tea at home, but it was such a pleasure to see all the tea companies (okay, and coffee) gathered together. I must do this again next year. I'd love to go to all the Tea Expos nationwide but that's impossible. Still, the one that's a quick subway ride away is not to be missed.
Posted by Catherine at 9:11 PM

Cathy
I think you missed your calling. You should be a commentator or journalist on the subject of tea. You really have the knack. I have learned soo much about tea just reading your blog. Who would have known. Though I am a coffee drinker I am not opposed to tea every now and then.

Thanks for the gift! I have yet to try it, but it smells nice. I'll give you a full report ;)

the blueberry biscottea is delish!