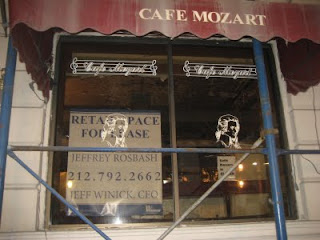 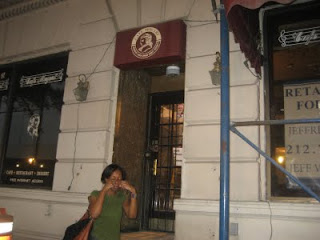 New York is overrun with restaurants and cafes...not that I'm complaining. The problem is that just when you start to welcome some new favorites, you have to say goodbye to the old ones. Sometimes the old ones seemed like institutions, that you'd be taking your kids too eventually. It's not always to be, I guess.

Perhaps I'm part of the problem. It could have been years since I'd last paid such a place a visit, but I think they'll be welcoming back with open arms, the prodigal patron. It's not like I don't want to return, but like I said there's so many places to try and I'm not exactly going to file Chapter 11 just so I can go out every night.

So it should come as no surprise to me that when I show up at a place like Cafe Mozart, it might not have survived in my absence. Not that my particular business would have kept it afloat, but it couldn't have hurt. I wasn't overcome by grief, but I was a little sad. I had some nice memories there, and I remember the dessert was pretty nice there. Oh, and they used to have live piano music! I wonder if that McDonald's downtown still has the piano player...

So there's Mozart and there's also Payard, a French restaurant/patisserie that had a wonderful if somewhat snooty afternoon tea service. Just when I heard that they too had macarons...they're gone too.

Cathy and I settled for Alice's Tea Cup on Friday night - it was nearby and always a favorite. But I say settled because the service wasn't what it should be. Chapter I is usually the friendliest Alice's in my opinion. Our waitress wasn't very friendly, and it felt like she was rushing us out; and a bit abrupt at answering our reasonable requests. Believe me when I say that Cathy and I are not overly demanding. People should at least try to hang on to their jobs. They may end up at the unemployment line behind the staff at Cafe Mozart (I know, they file online, but it's a funny picture.)
Posted by Catherine at 11:23 AM

Hi Cathy
Guess you have to find another tea house. But like you said they have plenty in the big apple. How is everyone? Aunt Sandy

Tea houses may be closing but cupcake places are a-opening ;) man, we're gonna get FAT :)
I think cupcakes are a trendy dessert right now, huh?