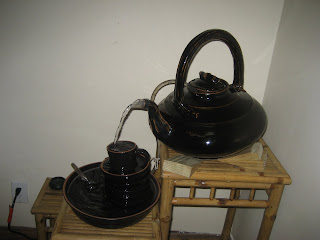 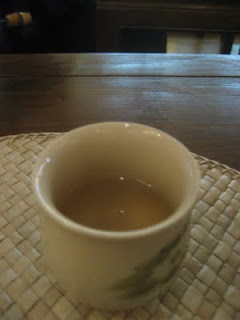 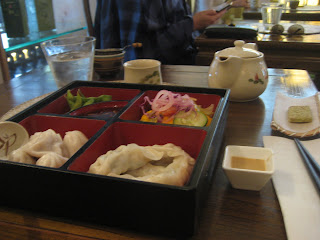 I visited Radiance Tea House and Books recently, and have nothing but pleasant things to say about the place. (Okay, it's not dirt cheap, but otherwise, very pleasant.) It's in Midtown, on the same block as the R train, so that's a plus for me.

I came during a busy time, where most of the tables were taken though there was enough space for me; and I didn't feel crowded at all. It didn't seem loud at all either. It was really peaceful. You need that at a tea establishment. Plus, the staff is friendly, helpful, but not overly fussy. The perfect combination. I sat not far from a window by the street, but the closest view to me was the painting to my left "Eight Prized Steeds" which depicted men bringing horses as a tribute to court. The painter was a Giuseppe Castiglione. Apparently he was from Milan, but visited China during the Qing Dynasty. But this isn't Art Appreciation Class. Not today, anyway.

There is an Afternoon Tea on offer, but I decided to have the dumplings, which came with a salad that had a dressing so good I nearly ate the tomato. It was slightly citrusy, which gave it that fresh feel. The dumplings($10) were pleasing as well. I had this soupy pork bun dumpling that gushes in your mouth when you bite in it, somehow without spilling any.

My tea of choice was the Rainflower (First Grade), which was a green tea that was ever so slightly smoky and buttery.

Radiance also sells books (I had quite a few of the tea books in my home library, surprise surprise), as well as Asian-inspired clothes, and of course tea and teapots. I managed to control myself, but it's a great idea to have these items right there for those who would tend to be in the mood for them after the tea.

The bathrooms were clean and well appointed. That scores points for me always.

I had a lovely conversation with a woman at the next table, who is also a blogger, but I must have written her information down incorrectly. My loss, I guess.

A top NY Tea Location in my book. Two pinkies up, and the pinkie toes as well (though I don't think I'd mess with mine as they've both been broken before.)
Posted by Catherine at 10:00 PM

Cathy
I would love to go to that tea shop as dumplings are one of my favoraites. You are so knowledgeable about tea and accessories. Lets go tea hopping.
Aunt Sandy

Glad you got to stop by one of my favorite tea places. Their tastings are fantastic. It's probably a good thing that I can't afford most of their teaware :) I am in love with the black and white ying yang set.

I love your descriptions! You have me wanting to visit a tea place now! Next time I come to NY, I must to one with you. :) And great pics too. I also love a staff that's not overly fussy.

I want to go tea hopping too! Though one tea shop a day would be amazing anyway.

I haven't been to the tastings yet. Sounds like a lot of fun.

they have these rice balls wrapped in sesame paper. very addictive.

the "calm sea" tea is my favorite so far. they also have an iced tea made of purple yams that is outstanding.