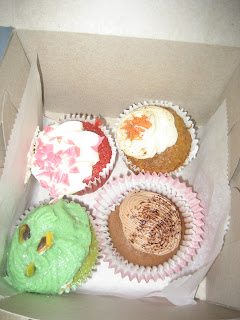 Steinway Street, and the area around it seems to be going through a mild renaissance. A number of new shops and eateries have opened recently...Ricky's anyone? Red Mango looks to be opening soon, which should do well in this not so pleasant July heat. I visited Mekato, a Colombian bakery, last week. The empanadas are good and there is ample seating. The one shop I've been anxious to visit opened today at noon. That's Cream, the bakery with its eye on the cupcake-loving demographic.

What blew me away, upon entering was those colorful favorites of mine, known in Cream as "French Macaroons." Jaw-drop - macarons in Astoria? On Steinway Street? Oui! They're $2.50 which is a little steep for its size, but I must say the one I've tried so far, Strawberry, was certainly big on taste. The ganache seems to be real strawberry jam. Yes, I don't have to ride the subway for a good macaron anymore. The macarons share a display case with all manner of chocolates, including truffles. My to-try list grows with my waistline... 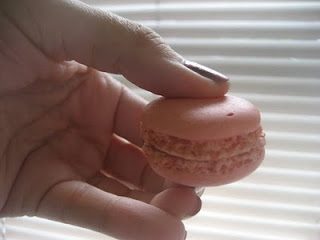 I picked up four cupcakes: Pistachio, Carrot, Red Velvet and Gluten Free, Sugar Free Tiramisu. Red Velvet is always my first choice, as it's my favorite and the basis for quality in my book. It passes the test. The cake portion was very light and mild, but the butter cream frosting along with the cream inside (living up to its name) was not overwhelming but wonderful. It had, in my opinion, the effect of a scone with clotted cream, but in cupcake form.

Why did I buy a gluten and sugar free cupcake? Because it was there. Well, the Tiramisu was rather good: less cakey, more of a chewy consistency, which didn't upset the quality of the cupcake. The frosting really tasted like Tiramisu. My only complaint, and this can't be helped, was that it had the aftertaste of diet soda. That's just me, I don't like sugar free products, but for sugar free it was excellent.

I have yet to try the other items I picked up, which only means I'm not a glutton. They won't survive Thursday, that I promise you.

Can this be a destination for taking tea? Well, there's a fair amount of seating, but so far there's no tea. I was told by management that I was the second person who asked after that, and that it should be happening in the future. When it's 90 degrees out, who really cares (coming from me!)

Their sign says "Sweet Surrender.) How sweet it is to have Cream on Steinway Street! 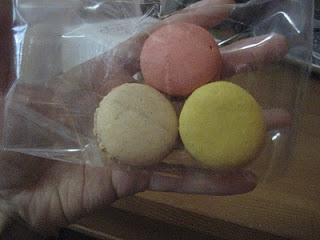 Added later...the Pistachio cupcake is Daphne-approved. She says it's a little dry, but she's pretty impressed; it doesn't taste too fake. There it is.
Posted by Catherine at 6:37 PM