Yet Another Great Place to Spoil Myself....Bosie Tea Parlor

When I read in the October 2010 Tea Time Magazine that a new tea room would be opening in the West Village that very fall, I was excited. One can never have too many tea destinations, and I was glad to have something to look forward to once I returned from my all-too-brief trip to London. I'd check online weekly to see when the opening day would be, and fall turned into winter, and winter dragged on forever, and finally spring came. Having been pretty busy in April, I hadn't checked in a while, and I was surprised to quite recently find out that Bosie Tea Parlor was already open!

That's a long wait in my opinion, though I'd say I'm a patient person. I've had to wait for a lot of things: trips, much-anticipated books, TV shows that take forever to get to the point. I'm still waiting on quite a few big things in my life, and am trying not to tap my foot in impatience. I can positively say, however, that Bosie was worth the delay.

I had a bit of time on my hands a few days ago, and I found myself in search of this elusive new tea room. I don't have the greatest head for direction, and south of 14th Street all bets are off. Thankfully, Bosie is just off of Bleecker, so my inner compass was in some working order.

Even so, the block it's on, Morton Street, feels a bit secluded and, well I was gonna say dark, but that could've just been the overcast weather. Still, upon entering I was greeted by the sight of all those colorful macarons and the one-woman staff (at least as far as I could see) who was the perfect combination of helpful and not all over the place. 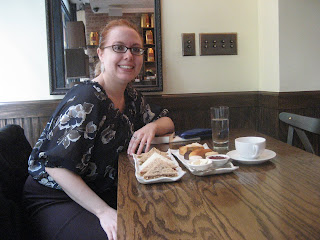 As you can see by the picture, nothing is overly ornate or ostentatious. There are a few cozy chairs in the back, but they were occupied when I got there. It was earlier than usual for me: before noon, but though it wasn't lunch time crowded there were enough people there to give it energy. I got momentarily turned off when I saw at least three people using laptops, then realized what a hypocrite I was. I'm always looking for places that have wi-fi and are still charming. Here it was, and I was find fault with it! I didn't dwell on my shame: I got down to business, perusing the menu for the perfect experience.

As I've said often enough, my criteria is usually based on the quality, quantity and reasonability of a tea room's afternoon tea. Though I think it was called 'Standard Tea' on the menu, it's the same thing, only without the three-tired dishes. Instead, you get this: 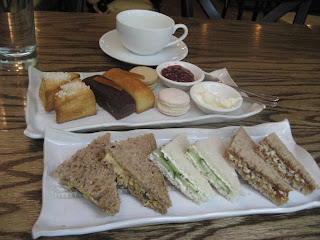 Am I complaining? Oh no! It was a feast fit for a Tea Queen, or anyone else for that matter. Well, maybe not a lumberjack but, besides one reasonably built middle-aged man, I don't think they're aiming for the burly clientele.

I had three kinds of sandwiches: the first was like a Coronation, with chicken and curry and raisins. Quite nice. The cheddar and pickle was perfect; reminded me of one of Teany's better sandwiches. The tour de force, however, was the cucumber sandwich. I'm not sure what they put in there, but it's the best cucumber sandwich I've ever tasted. And I've had some really decent ones. Bosie's has a special kind of cream cheese, I think; almost like a cottage cheese but a bit more whipped. I'm breathless just thinking about them.

There were two little scones that were cakey but dry enough to be a proper scone. The clotted cream was exactly what it should be. I got two tea cakes, a chocolate (with chips) and a lemon, both of which were finger sized but sweet and satisfying.

What distinguishes Bosie from the tea places I've been to is the macarons. Since Bosie is supposed to have some Parisien tea room influence, this is just right. I'll admit I've only spent 6 hours of my life in Paris, but Bosie's atmosphere and menu seem to fit my imagined ideal of the kind of place I'd settle into after a morning in the Louvre or shopping. I know I've totally stereotyped Paris there but at least there were no berets in the sight of my mind's eye. Rusty! (who knows that reference?) Anyway, I had a matcha macaron and a jasmine, both of which I chose for the tea theme. They were both good, though the jasmine's flavor was a bit more Lush than Laduree for me.

Oh yeah, the tea. I had the Dorian Grey (Bosie is a reference to Wilde, I think, so I couldn't resist), and it was okay but not very strong. Maybe all the other flavors at my table overwhelmed it, but that's not usually the case.

I'm very happy to have a new tea destination, and one whose sandwiches instead of the price are swoonworthy. I am aching to return, and to bring a friend or two, and to try more items on the menu. Good things come to those who wait!
Posted by Catherine at 6:00 PM

wow what a spread. Wish we had tea rooms up here. Looks like you had fun. Glad it is not out of the way for you. It is nice to treat yourself to the pleasures of life.
Aunt Sandy

I went there a few weeks ago. Loved Darjeeling tea macarons. My tea was good, but on the weak side. can't wait to go back, it is a lovely, peaceful place.

i loved the apricot black tea! and the peanut butter and jelly macarons!