New York's in a constant state of flux. That's an understatement - blink and you'll miss something. Why else would food trucks be such a rapidly expanding industry? (No, I don't have quotes from the Wall Street Journal; I have eyeballs.) Food trucks pop up all over the City, and at lunchtime their lines are long and healthy. If business is slow or threatened, they just move on to another location. They can adapt to change. So can I, to an extent. For example, when I hear another tea shop or tea room has opened, I plan a visit as soon as I can (well, except for Lady Mendl's. One of these years - literally.) These are good changes. What I don't like is the sudden closures of a number of tea businesses in the area - particularly Midtown.

I'd passed by the former location of Subtletea, and felt bad that I'd never really stopped there. I think once I picked up a cup of tea to go, but really, it wasn't in an area I tend to frequent. Besides, the one time I did do tea on that block was at Keko Cafe, which was perfectly nice but it's been almost four years.

Then I emerged from Grand Central Station, and the first thing I saw was the lack of the Tea and Honey store. What? Why? Then I remembered it had been some time since I'd picked up tea there, or anything for that matter. As much as I loved the place, it was not the most reasonable option. Even good quality tea should be affordable for the slightly ambitious tea conoisseur. And let's face it, the average person - commuter, tourist, or otherwise, doesn't care if some cute shop has great tea. Personally I hope they just plan to open elsewhere, Little Miss Matched disappeared from Grand Central, but there's other locations. That's just one example.

Then, even more shockingly, I found out TeaGschwender is no more - at least not in Manhattan. Sadly, I'd only visited the location once since it opened - less than a year ago. I've decided to blame it on the name. It sounds a bit like a sneeze, which nobody wants to associate with their cup of tea.

But I feel mildly responsible too. I mean, the economy's not that great, etc., but losing two tea retailers in such a short matter of time...places that were in quick walking distance from my workplace...perhaps I could have supported them a little better?

Is it because I drink coffee in the morning now?

Yes! I admit it!!! I became a morning coffee person! It actually started around my London trip, when I wanted to fight my jet lag with something stronger. I still love tea and tea rooms, and I always will, but my home and work supply doesn't need to be replenished as quickly. I mostly make tea at home still. My coffee-making skills leave something to be desired.

So...no. I will not feel guilty. I'm not a cold person, but business is business. This goes for me, too. I hope the tea-related businesses thrive in New York, and have yet to review my recent visit to the new Harney & Sons tea shop in Soho, but I'm not gonna feel bad for not blowing every paycheck on tea. I will, however, continue to report on places I think everyone should support. Some places need to remain as long as possible. 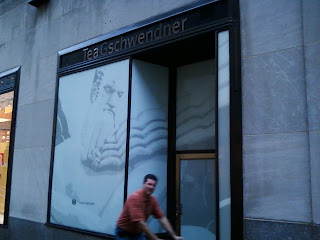 oh no, all of the teagschwendner locations have closed? I used to visit the one in rock center. they were always cheerful and nice and the quality of the tea is great. that is very sad. I was not a huge fan of the tea and honey store- everything was very overpriced.