Not Another Cupcake Blog!

I know.  The Blogosphere is inundated with cupcake blogs, and I've done enough posts myself on places that are both legendary and fleeting.  But let's face it: cupcakes and tea go together like coffee and donuts.  So how 'bout another one?

On Friday evening, I went to 'Little Cupcake Bakeshop' in Soho, or Nolita, or West Chinatown, I never know the boundaries of these neighborhoods.  It's by Prince and Mott Street, so you decide.  Bathy and I had already eaten at Caffe Reggio (yep, I still go there, though it's been a while), and after taking a nice stroll east, we found this place in all its gleaming white and pinkness.

About pink and me: For a certainty I'm feminine, but despite my love for tea time and fairies and baby animals, I'm not a girly-girl.  I'm not dainty, despite my small hands, and I don't wear high heels.  I giggle, but I rarely squeak (unless I see a particularly cute baby animal.)  Pink -not the singer, the color- can be too much for me sometimes, so it's one of the least represented colors in my wardrobe and home decor.  I don't mind if others are into pink, or in this case pink-and-white.  For these folks, you really need to try this place.  For everyone else, well, it's not that pink.  As for atmosphere, I'll give them this: love the chandeliers!  Someday I need to put a few of these in my apartment.  There was also a decent amount of seating, which means the baked goods come a tad pricey, though not any more than most nowadays: cupcakes go for $3.

Bathy had a kind of lemon cake, which I only had a bite of so I can't in all fairness offer my judgement on it.  I did taste lemon, which is half the battle.  I could not resist trying a Blue Velvet cupcake.   It was made with blueberries, though I'm pretty sure it was food coloring that give it that turquoise interior.  The frosting was a cream cheese, and altogether it was somewhere between moist and dry, and definitely more cupcake than muffin.  I did taste blueberry but it wasn't overwhelming.  It went well with the raspberry iced tea - they use Harney's which is always a favorite in my books.

Their bathroom was nicer than home, which was probably why a male patron decided to use it for his evening shave.  I guess I'd rather walk in on that activity than anything else he could've been doing in there.

I'd still say one of the best cupcakes (and cheaper) you could find in downtown Manhattan is in Sugar Sweet Sunshine, but Little Cupcake Bakeshop is pretty lovely.  And (here comes a plug), it's a lovely backdrop for a discussion of beauty products a la Pretty Opulent. 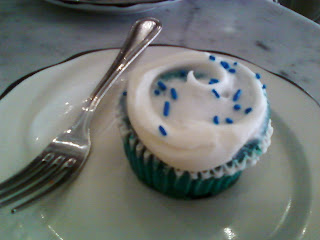 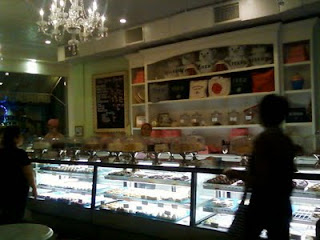 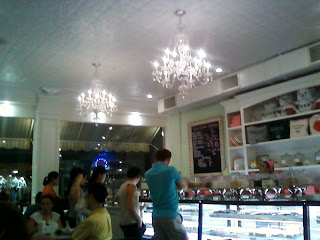 Subway: N/R to Prince Street; 6 to Spring Street﻿, M to Bway/Lafayette
Posted by Catherine at 6:41 AM