It's hard to classify this walk as crazy, as it's designed to be walked from one end to another.  You could cut out early, but even if you walk the full length, it's maybe a mile at the moment.  What makes this more of a challenge is getting to the High Line in the first place.  The closest subway station is the 8th Avenue line, which means you still have to make it to 10th - and in my case, it seems I always start from a greater distance away.  Recently I came from Midtown East, and let me tell you, I'm glad I wore comfortable shoes.

Though the inception of the High Line as a public space began over a decade ago, it look time to convert the former elevated train tracks to something resembling a park, not to mention getting the support to do so.  There's a book out explaining its history, which incidentally is a lovely coffee table book, particularly for those who love anything New York.  What would you call that, by the way:  New Yorkophiles?  That sounds weird, but what can you do?  Anyway, it opened to the public in 2009, the year I took some of my craziest long walks, and it's lengthened gradually since then.

Now the High Line has become immensely popular, which also makes it a little too crowded sometimes.  Still, it's no Grand Central Station, and for anyone looking to get some excellent bird's-eye views of the city, it shouldn't be missed.  If you're like me and hate stairs, quite a few exit points have elevators.  They've got it covered. 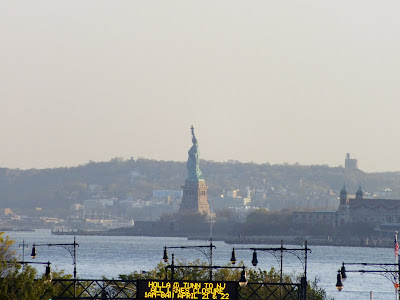 The Lady's backside: guess she doesn't want your tired and poor anymore. 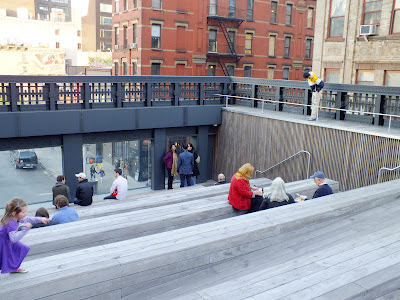 A relaxing way to watch traffic 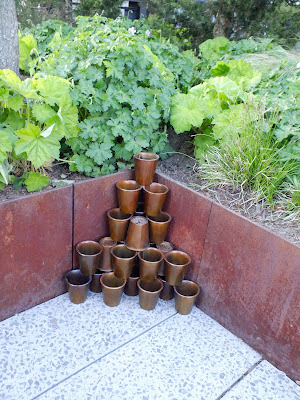 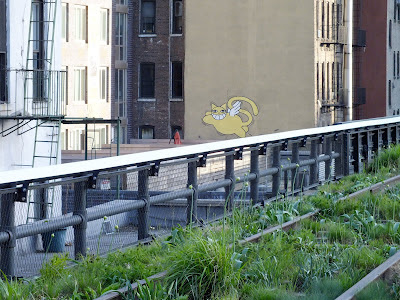 
These are only a handful of pictures I've taken up there.  It's certainly a photog's haven.

In keeping with the spirit of this blog, I have to say that on a nice day this would be a fantastic place to take tea in a slightly informal way. I've probably mentioned before that I don't possess any outdoor space of my own, so I can't do 'Tea in the Garden' on a whim.  With its decent amount of seating areas, though, something can certainly be made of the High Line.  There's enough entertainment in people watching, flower admiring, and skyscraper-gazing, on top of the fact that there's some actual live music here and there.  And, of course, one end of the park is by the Meatpacking district, just a scone's throw away from the West Village, which means Tea and Sympathy, The Tea Set, Bosie Tea Parlor, DAVIDs Tea, to mention only a few spots to pick up your tea and cakes if you didn't pack any.  Oh, and let's not forget Chelsea Market!  Don't worry about the calories...you can always walk them off.

You are teaching me about your piece of New York. Seems busy and crowded and interesting. :)

I only walked the high line once, when it first opened. I wasn't really that jazzed by it. But I'm sure the landscaping and plantings have grown since then. The best thing about my walk was that there was a tea shop in Chelsea Market at the time (I think it was T salon). it was a great way to end the walk. But sadly it has since closed! There are still lots of tasty options for sweet and savory, but no tea cafe...

It's a shame about T Salon - I remember their location on 20th Street, and actually worked there for a day (long story.) They were supposedly going to open branches all over the place, but now it's mostly an online operation from what I can see. Oh well. As long as nobody messes with Tea and Sympathy!

Busy and crowded and interesting...yep, that's NY in a nutshell. Today it's just plain hot.