These days in New York, there is no shortage of tea rooms.  We're utterly spoiled, so if one place doesn't float your boat you can just go to another.  But I remember a time, not too long ago, when you had to make a bit of an effort to find a decent place for a nice cuppa, not to mention a good afternoon tea.  (Picture the rest of this paragraph told by me on a rocking chair, even if I'm only referring to the 90s.)  There were limited sources of information, for one thing.  It was mostly word of mouth, and not enough mouths had a taste for tea.  There was the Internet, but it wasn't exactly brimming with guides and blogs yet.  The City had hotels with afternoon tea, and that was about it.  I was pleasantly surprised with Tea and Sympathy, and I'd heard of Lady Mendl's - still haven't been there!  The only other place I'd heard about was Kings' Carriage House. I meant to go there, but I never managed to - having a small daily time window for tea doesn't help when you normally have a full-time work schedule.  Also, when I didn't have a full-time job, I was usually too broke for a place like this.

Enter the world of online coupons.  It's been hit and miss for me, so in the long run I can't say I"m a big advocate of them.  Still, if it's tea-related, I'm probably going to fall for it.  You'd think they'd target me even more aggressively (do you hear me Lady Mendl?), but I should be glad I've only had a few opportunities.  When I found a 2-for-1 for Kings': well, I was sold.

Thankfully, my experience was generally a positive one.  The service, both in making reservations and while in the restaurant, was as friendly as I like - not gushy but not snooty.  As usual, I waited till the last minute, so weekends were out, but they were accommodating and I got a reservation for 5:30 PM on a weekday.

'Carriage House' sounds old-fashioned from the get-go, and it was charmingly so.  It's located in a brownstone, which is one of my favorite kinds of building.  In the entrance room, there's an old secretary's table, and it just felt like home.  I never went upstairs (lazy) but my tea companion Cindy looked up there and was suitably impressed. We were seated downstairs, near the 'garden' - I call it that because it reminds me of the little garden area in the homes in Bath where Jane Austen lived.  I don't think she had deer heads decorating her dining room, but who knows?  I tend to be squeamish about animal bits as decoration, but as I used to work in an office that had a massive moose head above the filing cabinets, it doesn't take away my appetite.

So, the food: elegant finger foods, lovely scones (with butter, not clotted cream, but that's okay,) and a tasty variety of little cakes and tarts.  They even served chocolate-covered strawberries on the side - oh yes!  The tea was bagged, which I don't usually approve of, but I had mint tea since it was the evening.  It was served in teapots - mostly Sadler like Tea and Sympathy.  Definitely good food.  Of course, the price was right - if I'd have paid full price I'd probably say the portions weren't quite filling enough.  It wasn't tiny like Radiance, but kind of like its neighbor just west of them - the Met's afternoon tea.

So it's a favorable review, though I'm not sure I'll be running back there anytime soon.  It's also a restaurant, which I'd be curious to try as well.  And I wouldn't be afraid to take men there, which I can't say for every tea spot. 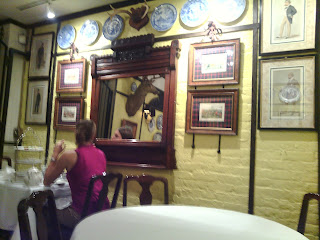 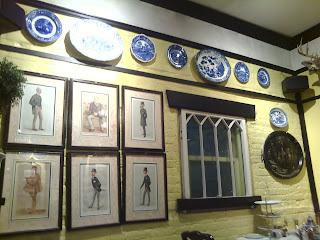 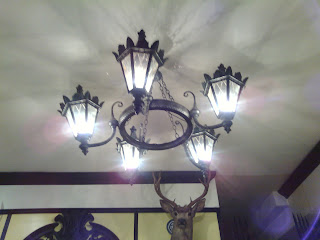 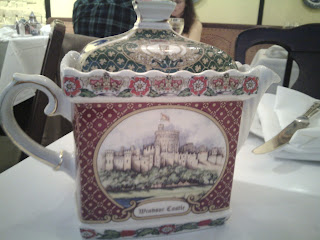 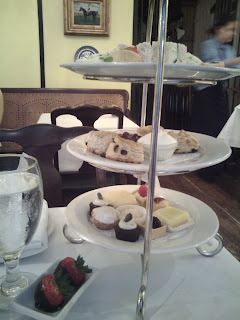 Posted by Catherine at 7:38 AM

Out of the ordinary information. Credit on behalf of the info!