Books and Cake! In London! 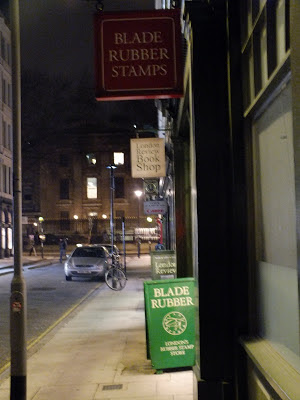 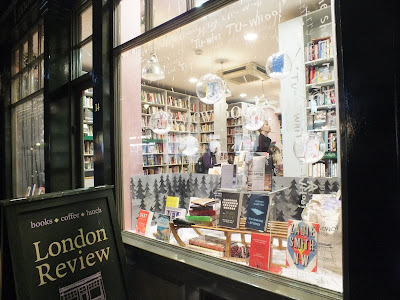 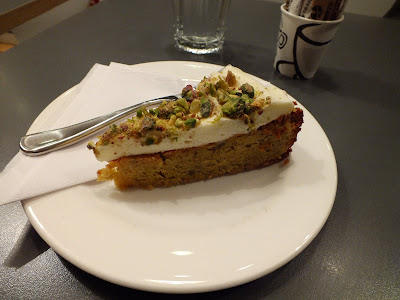 It's been some time since I did a Tea + Book pairing.  While this isn't specifically a pairing post, it does sound down the truth of the matter: Teatime and Booktime are usually one and the same for me.  That's why, many years ago now, I got excited when bookstores began to boast a cafe in house more frequently. Of course, in recent years we've seen a demise in the Borders/Barnes and Noble model, so it's more of a challenge to find this pairing.  That's why I made a point of coming to the London Review Book Shop as soon as I was aware of it.

It wasn't as easy as it should have been, because it's near the British Museum, a place I had the hardest time  finding for some reason.  And by the time I did, I was reeling with hunger and cold, so my first stop was Wagamama.  I still had a sweet tooth, and a sense of entitlement after walking one of my craziest long walks ever, at least in London. 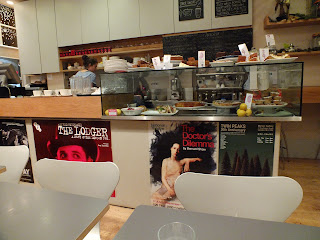 As you can see from where I was sitting, it's by no means a frilly, girly place, though the cakes had Alice in Wonderland-themed tags.  Their selection was a real treat, though.  I ended up having a Gluten Free Pistachio Rose cake, with a Blackcurrant infusion.  I'm not always a fan of GF cake - it can be dry and crumbly, but when it's done right, it's done right!  And this cake was just right.

It wasn't crowded, but the staff was busy enough.  There was a healthy mix of people, and no obnoxious conversation to sully my chill out time.  I caught up on my travel journalling, which wasn't always as easy as I thought it'd be on my own.

The bookshop itself was brilliant.  That's not hard to be in London - even their chain bookstores are thrilling for me.  There's just enough difference in titles than New York to make me wish I could spend an extra week just among the stacks.  Still, I wouldn't want to spoil myself.  Then it was onward to another crazy long walk, but not before I took a header outside the neighboring rubber stamp shop.

I really fall for those kind of places...