What Do You Call It?

I've succumbed again to subscribing to real-paper magazines.  I still get Victoria on my Nook, but I have to admit, it's not an enjoyable reading experience.  Someday I'll get to the whole comparison between e- vs. paper reading post, but now's not that time.  The magazines I get in my actual mailbox are Tea Magazine and Tea Time.  This shouldn't surprise anyone.  Though I tend to skip many of the articles in the holiday-heavy issues, there's always something that attracts my interest.

I noticed that in each of the recent issues of these magazines, there was at least one article that covered herbal tea.  Of course, they qualify the expression 'tea' by letting you choose between herbal tea, tisanes, or infusions.  And I agree: tea, as a word that really means the drink derived from the leaves of the camellia sinensis plant.  Technically, infused peppermint leaves should not be called 'tea'.

When I bring up the subject of tea (and you know I do at least once a week), I often hear people say they love tea, and then list a bunch of not-actually-tea teas.  Then I feel the tea geek in me want to point out the error in their expression.  But you know what?  Maybe I'm a little off there.

Think about it.  Have you ever asked an English person what they'll be having for tea?  They may mention a full meal that doesn't include a hot drink at all.  In some parts of that country (I think mostly in the North) 'tea' just means dinner.  They aren't wrong or right.  It's the nature of the language.   Let's not forgot what we learned on Seinfeld: sometimes coffee doesn't mean coffee, either.

....I know High Tea is what people call Afternoon Tea sometimes, and that's technically incorrect too.  I'm still a little peeved on that score, but I won't bit your head off.....

So I've decided to ease up a bit on the technicalities. Or should I say techicaliteas?  People say 'Chai tea', which is a tautology, and if you have rooibos chai is it really chai?  You could really run around in circles debating these things.  And I've tired of being on edge about things.  Maybe it's because I've lowered my actual tea intake, and am now quite the herbal/fruit tea drinker.  If the word is good enough for most people, maybe it's just the way the English language itself changes almost organically.  Like I said, the nature of the language.  So, in this case, let's go with the flow!

So what kinds of "teas" do I like? Well, let's go back to the basics.  I had a cold this week, a bad one, and I couldn't miss work so I had to do whatever it took to get going.  In the afternoon I'd have Lemon Zinger tea from Celestial Seasonings.  Its scent takes me right back to afternoons in college, particularly when I was taking Oral Communications.  In autumn I also go for the apple cinnamon-y blends - and that happens to be one of the few non-rooibos that could stand adding milk.  It doesn't need it, though.

I've got famously bad digestive issues, so chamomile is a part of my life.  Chamomile-lavender is wonderful, and so soothing.  Peppermint is good too, but with all the Altoids I eat I'm pretty covered there.

I have tons of herbs in my tea cabinet. What - doesn't everyone have a tea cabinet?  Though sometimes I'll buy blends - Simpson and Vail has some wonderful blends - I'll also try my hand at blending my own concoctions.  I get good use out of my teapots, especially in the winter!  Having good fruit teas around helps, too, because you can sneak in some of the less tasty herbs and it'll still be a pleasant drink.  I particularly recommend this method with Valerian.  It's relaxing, but terribly bitter on its own, and its smell could clear a subway car.

Herbal articles always come with a warning, so I will too: if you're taking medications, make sure they don't clash with the herbs.  Ask your doctor and all that.  Also, for my gluten-free friends, look out: some herbal teas have barley or other ingredients that might make you sick.  Always do your homework!

So curl up and sip: winter is coming! 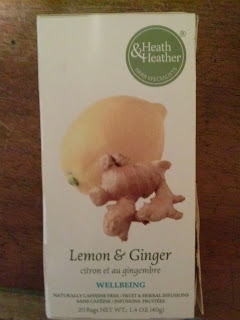 Bought this one last year in London...really helped me through the inconvenient 'stomach' troubles in the early part of my trip.  It still helps me on my off days.  Tastes good too!
Posted by Catherine at 5:00 AM