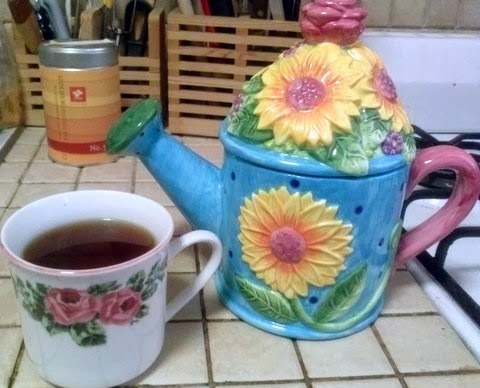 Pairing: if you're healthy, I'd recommend Tower of London tea by Harney and Sons (ha) or a Rose blend - for the York and Lancaster factions, of course.  Since Henry VII had a reputation for being a miser (and Alison Weir had points against that, too), my old-tea Sick Day blend is just the thing for those stuffy days.
Posted by Catherine at 12:16 PM

So, in short, it was a biography of Henry VIII's mom? What years did she live?
Your teapot and cup were very cheerful.
Decaf mango flavored HEB brand tea awaits you in SA!
At least I won't serve u blueberry yoghurt...

Bon, she lived in the late 15th to early 16th Century. She died on her 37th birthday, after childbirth. Their methods of midwifery were not exactly sterile.