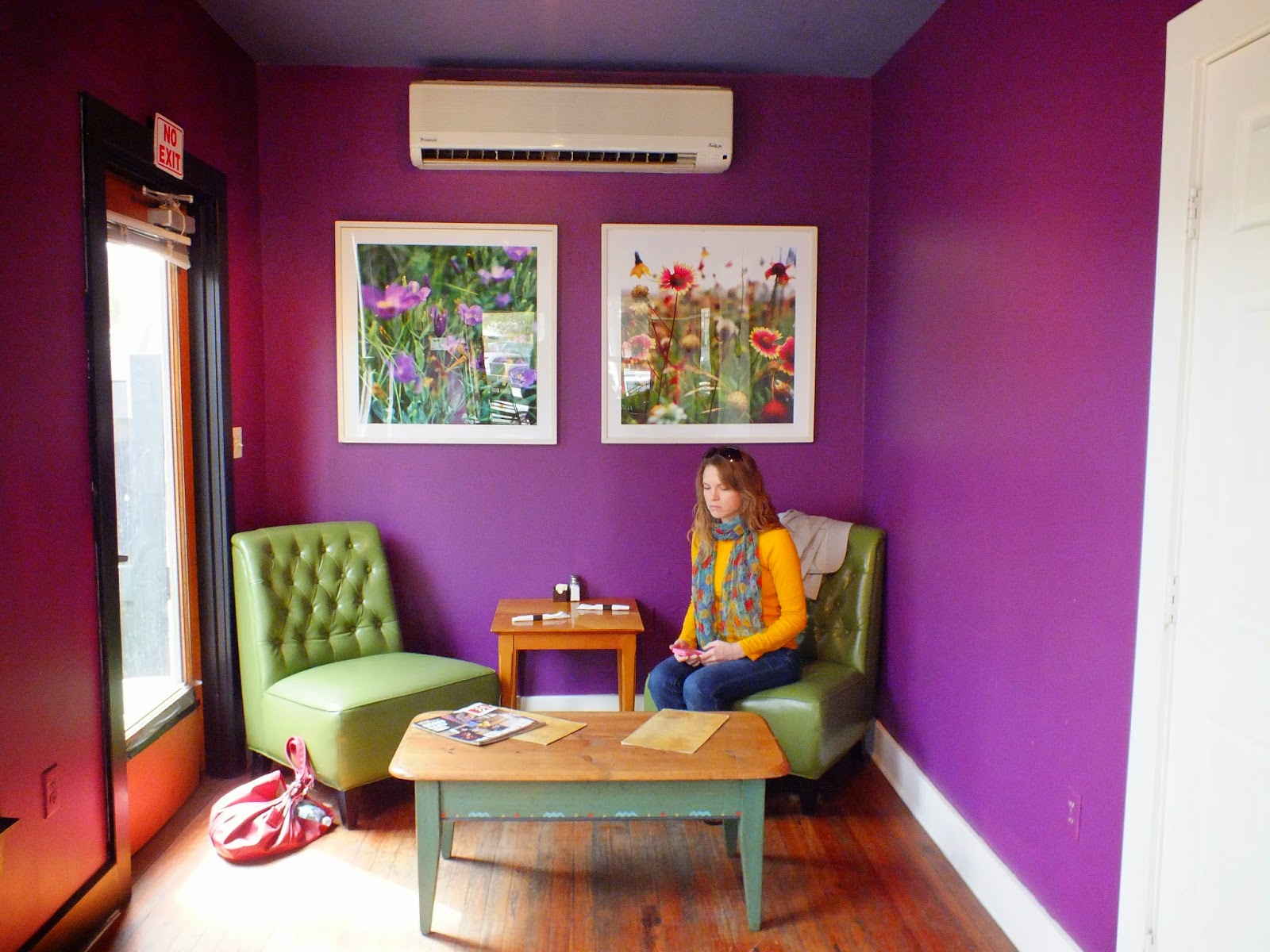 It seems strange to go looking for tea spots in a place like San Antonio, Texas.  Shouldn't one search out barbecue joints instead?  Well, of course I did that as well.  Still, I would be remiss if I neglected my duties as Tea Queen of Astoria, no matter where I was on the globe.  And thankfully, my efforts were rewarded.  This was evident especially in the oversized Mad Hatter Tea House & Cafe. 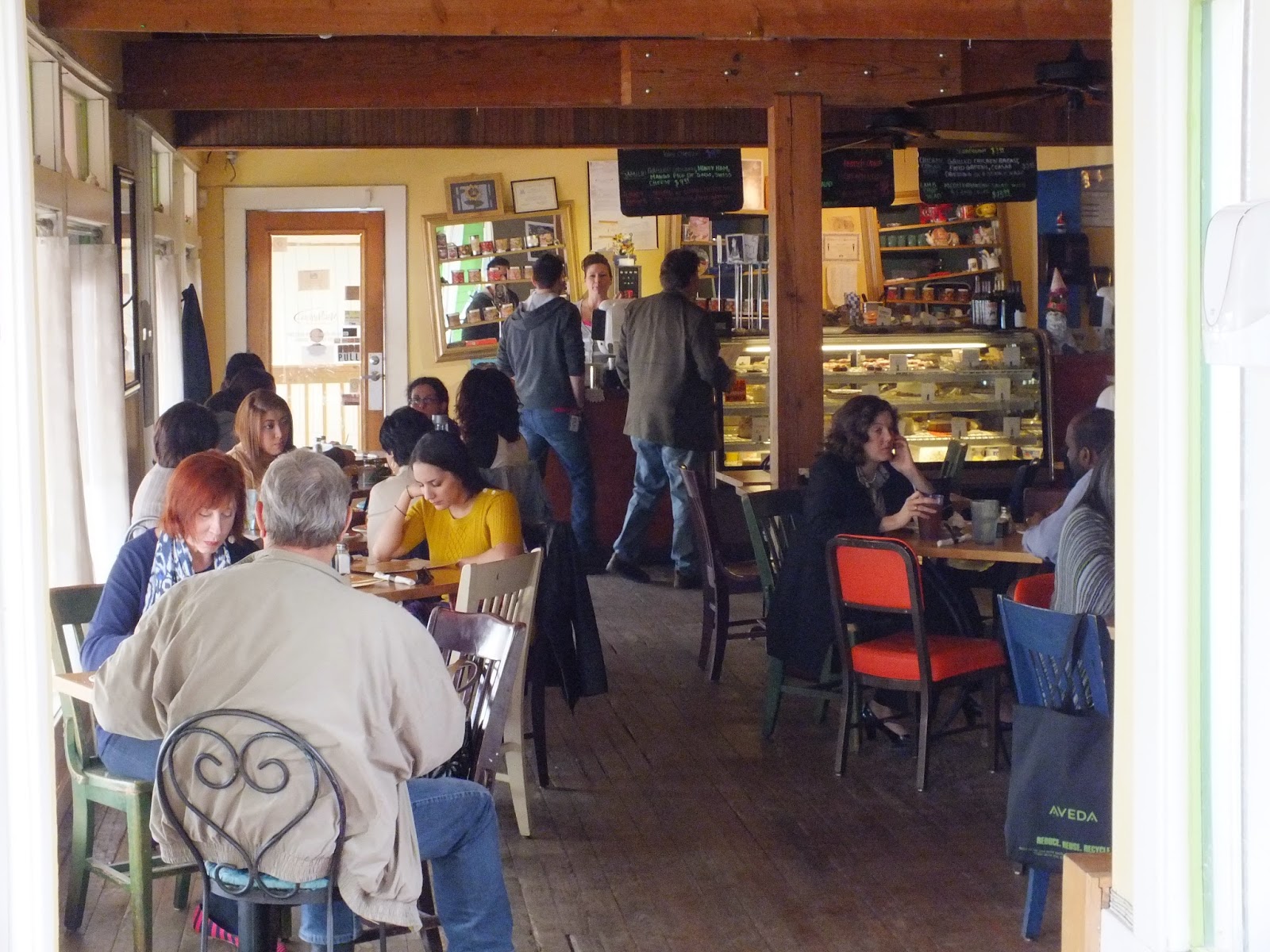 I always thought Alice's Tea Cup was large, and none of its 3 locations are tiny, but Mad Hatter's is the overgrown version of its New York counterpart.  There's multiple rooms, and the building itself takes up most of the street.  Real estate prices alone would keep you from doing that in Manhattan!

You make your order at the counter, then wait for the staff to bring it to your table.  You select your own teacups, which I kind of liked.

However, though the staff were friendly enough, it was a little off-putting when the man who brought our teapots to the table stuck in nose in the pots to see which was which.  Ew.  Even so, he got our teas mixed up.  Doesn't everyone know Bonnie gets the rooibos?  I'm the Darjeeling girl!  I mean, that might change in the evening, but still.. 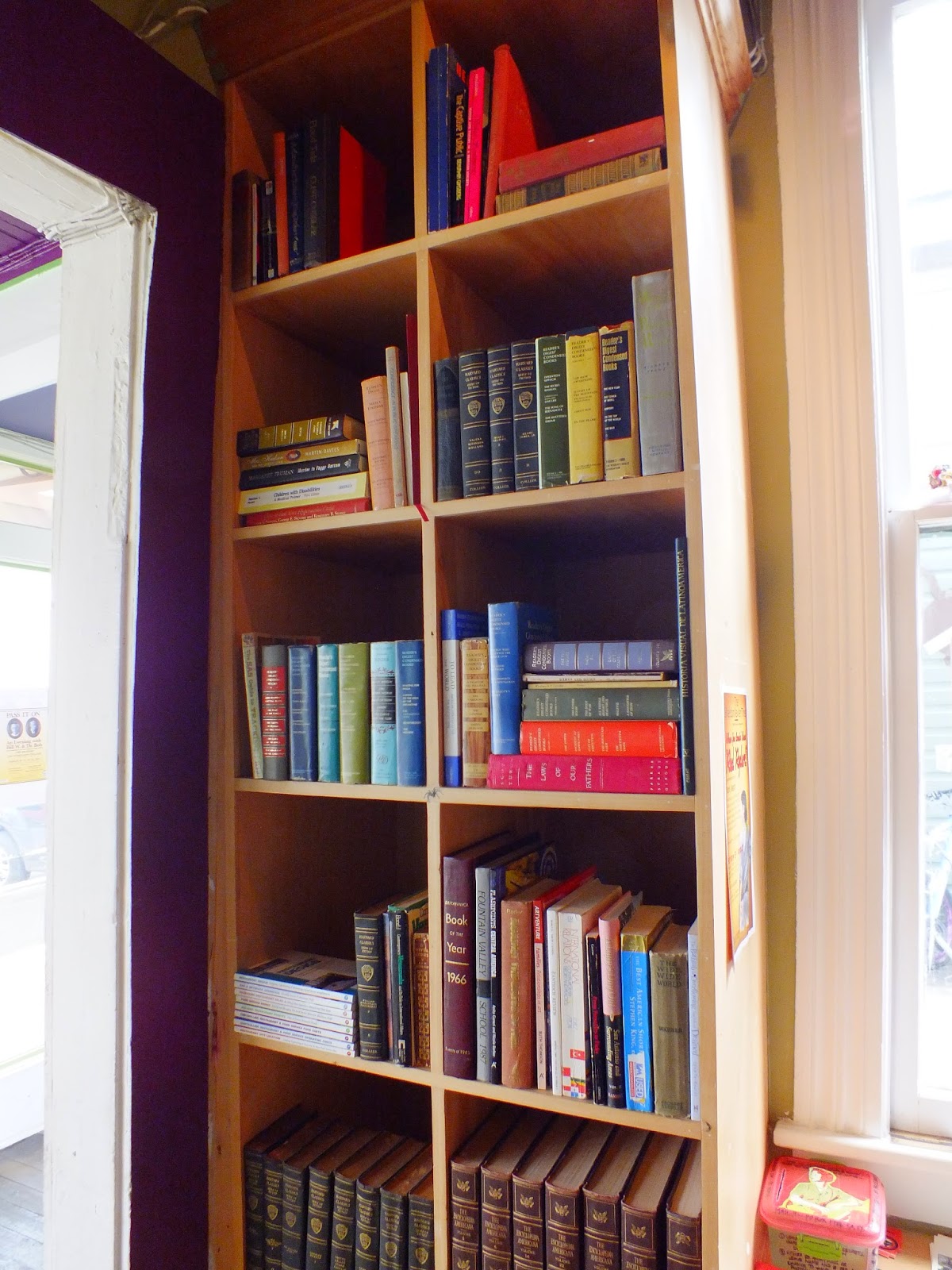 One thing I love is a cafe of any kind with bookshelves.  It's why I love a good cuppa in my home library, and why I'll take the bus from Port Authority to Van Gogh's ear in Union, New Jersey.  There's just something about being near books.  I can't articulate what it does for me.  Also, you'll have something to occupy yourself with if you're along, nevermind the phone. 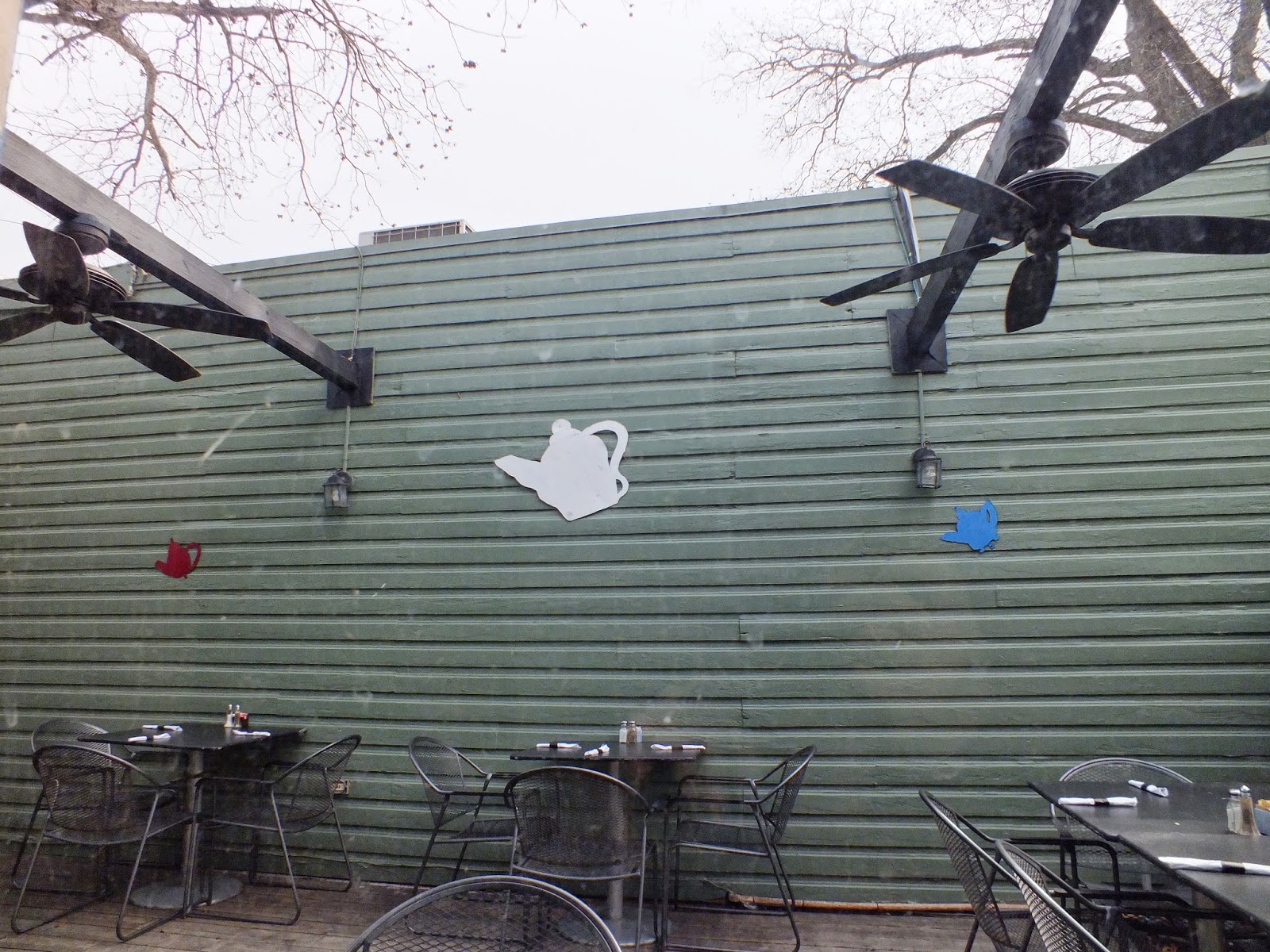 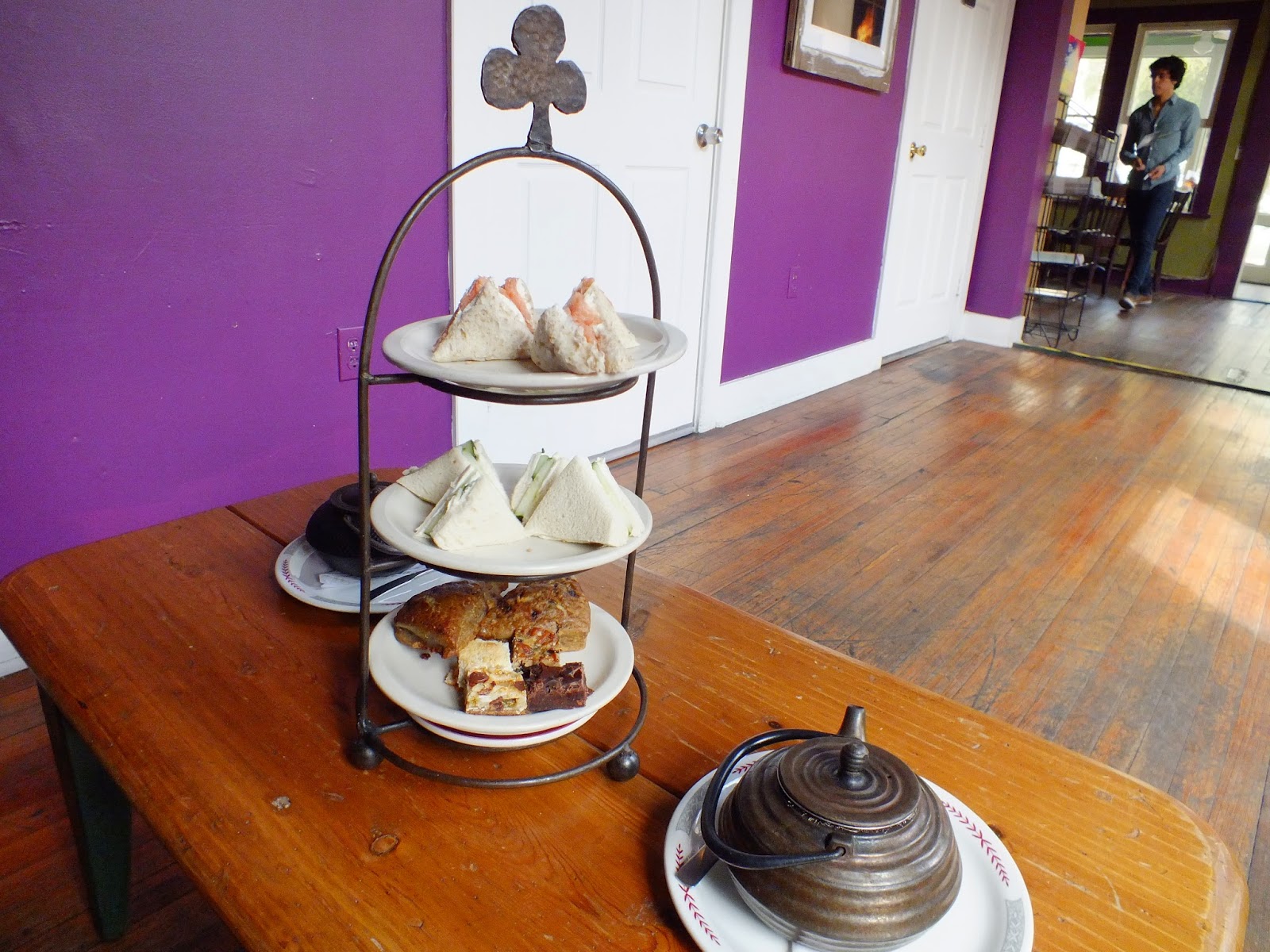 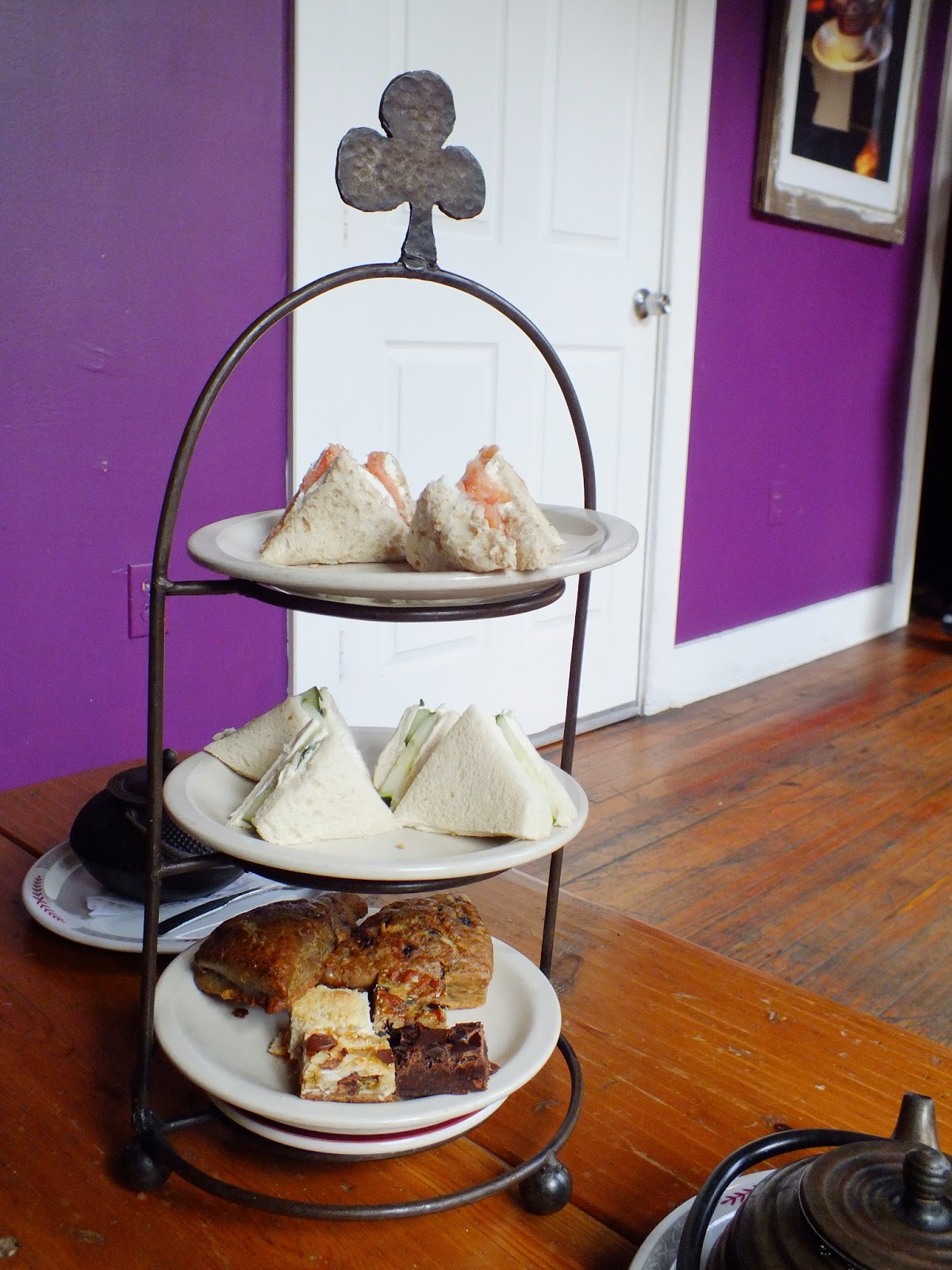 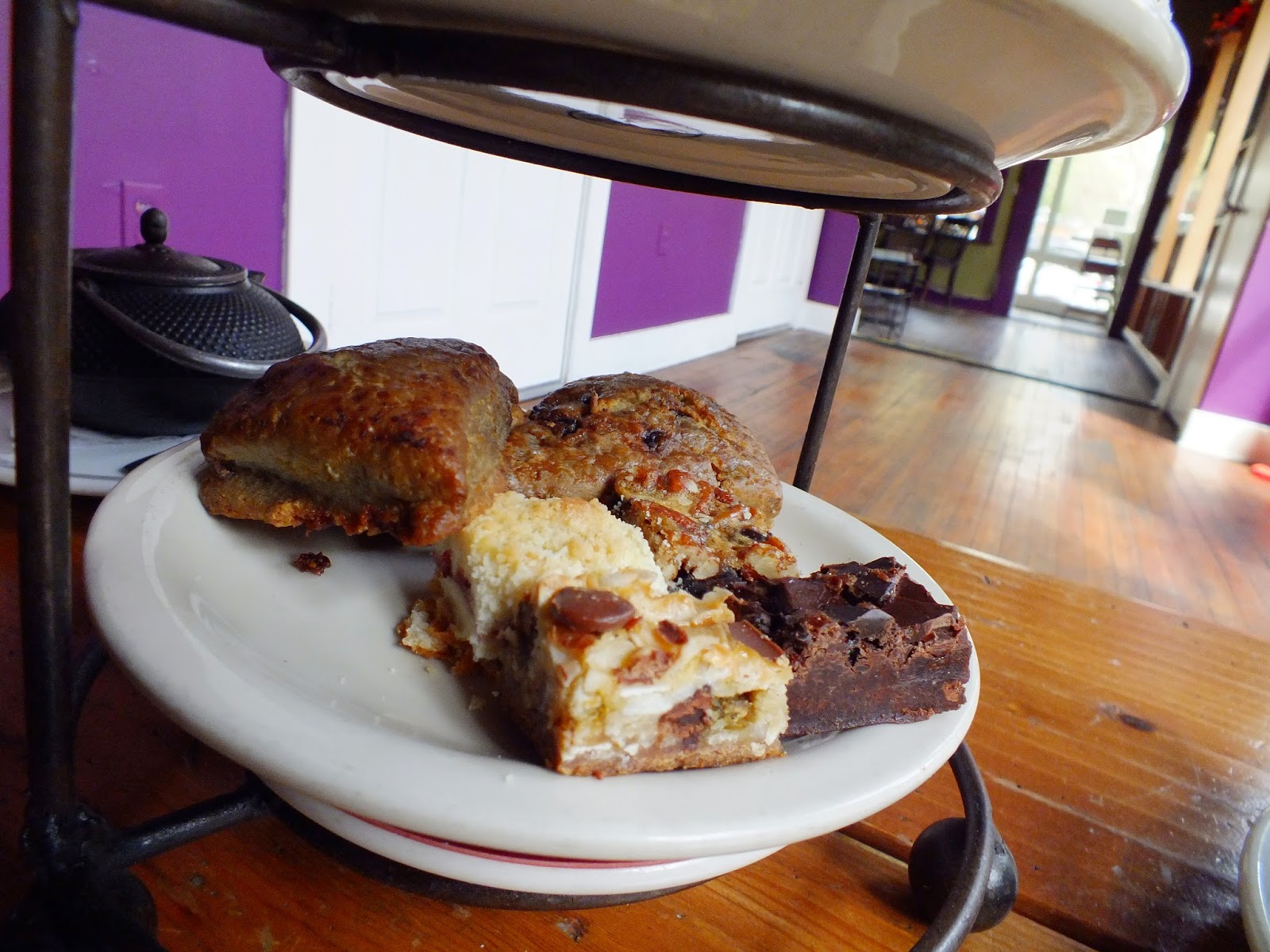 We ordered the Afternoon Tea, which was $18 for two.  Pricewise that's quite satisfying.  However, there were only two choices of sandwich in this deal: smoked salmon and cucumber cream cheese.  I don't like smoked salmon, and cucumber sandwiches are all well and good, but one gets bored of it after a while.  There were other tea sandwiches, but they could be ordered separately.  I'd do that next time.

The scones were fine: bear with me, I didn't take notes and it's been nearly a month, but I think they were cinnamon and blueberry.  They were fine on their own, and I wouldn't recommend the cream/jam conglomeration.  They were mixed together and looked like things I wouldn't speak of here.  The petit four were really sweet, another reason why I always say you don't need to add anything to your tea! 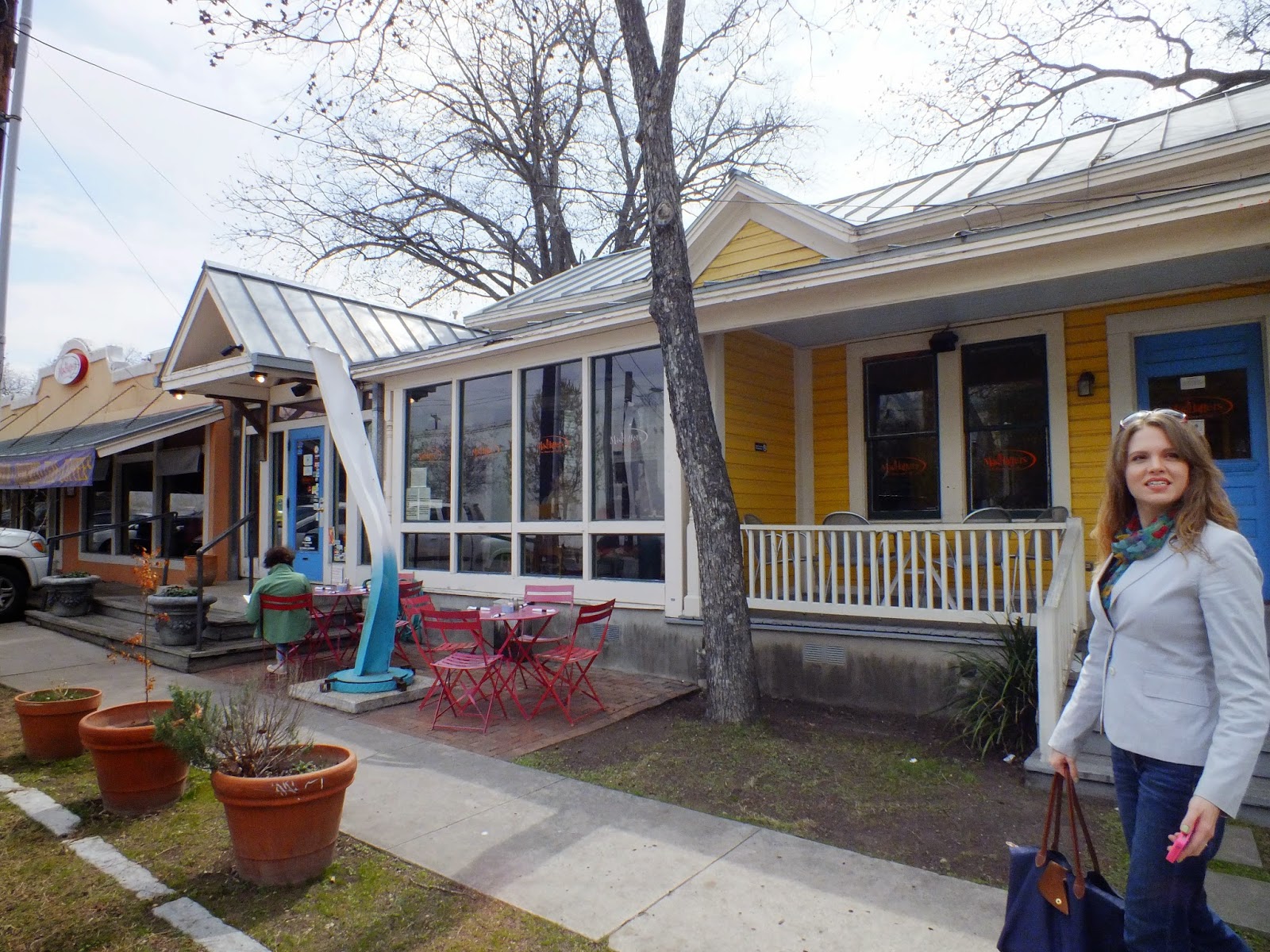 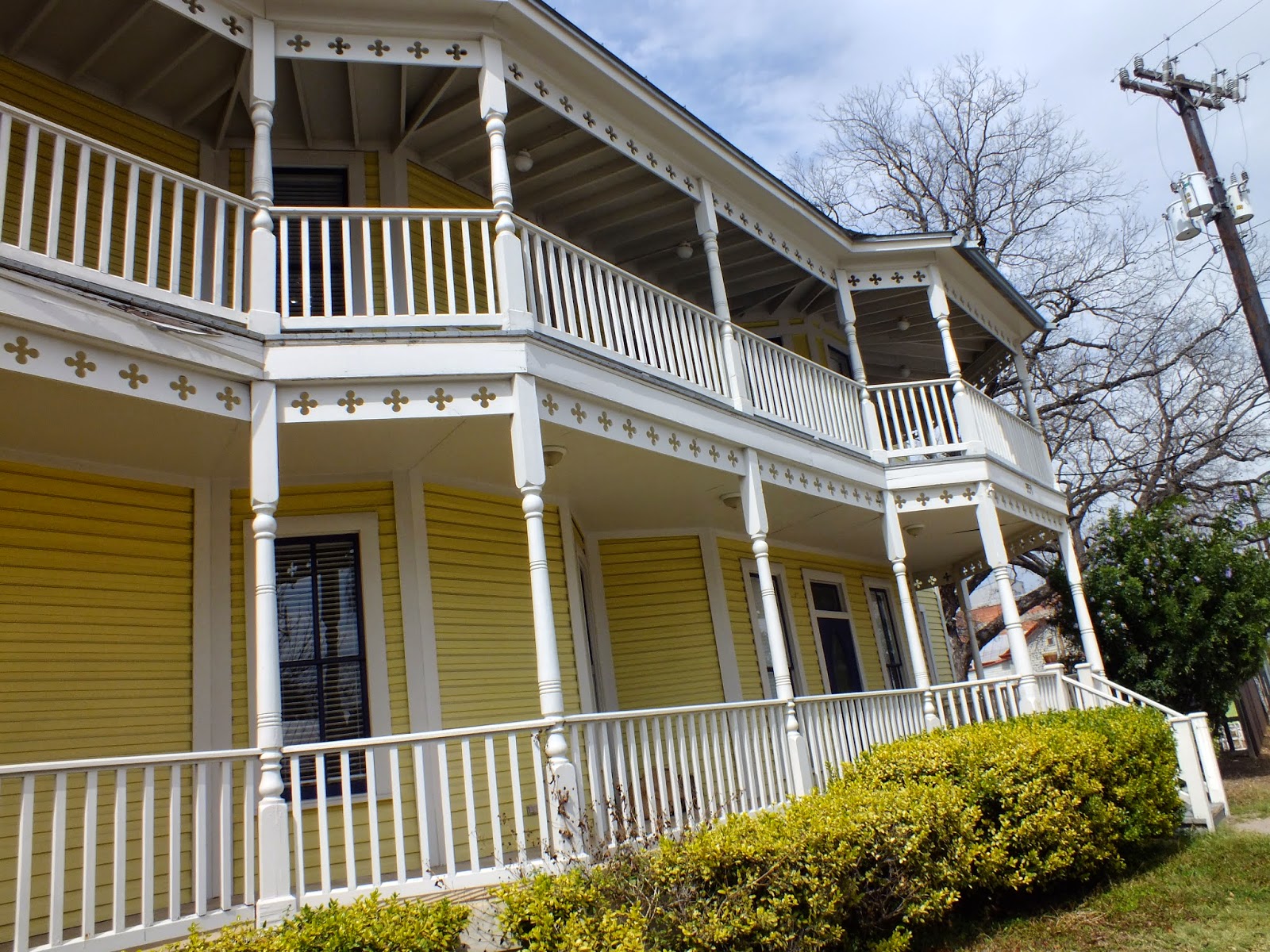 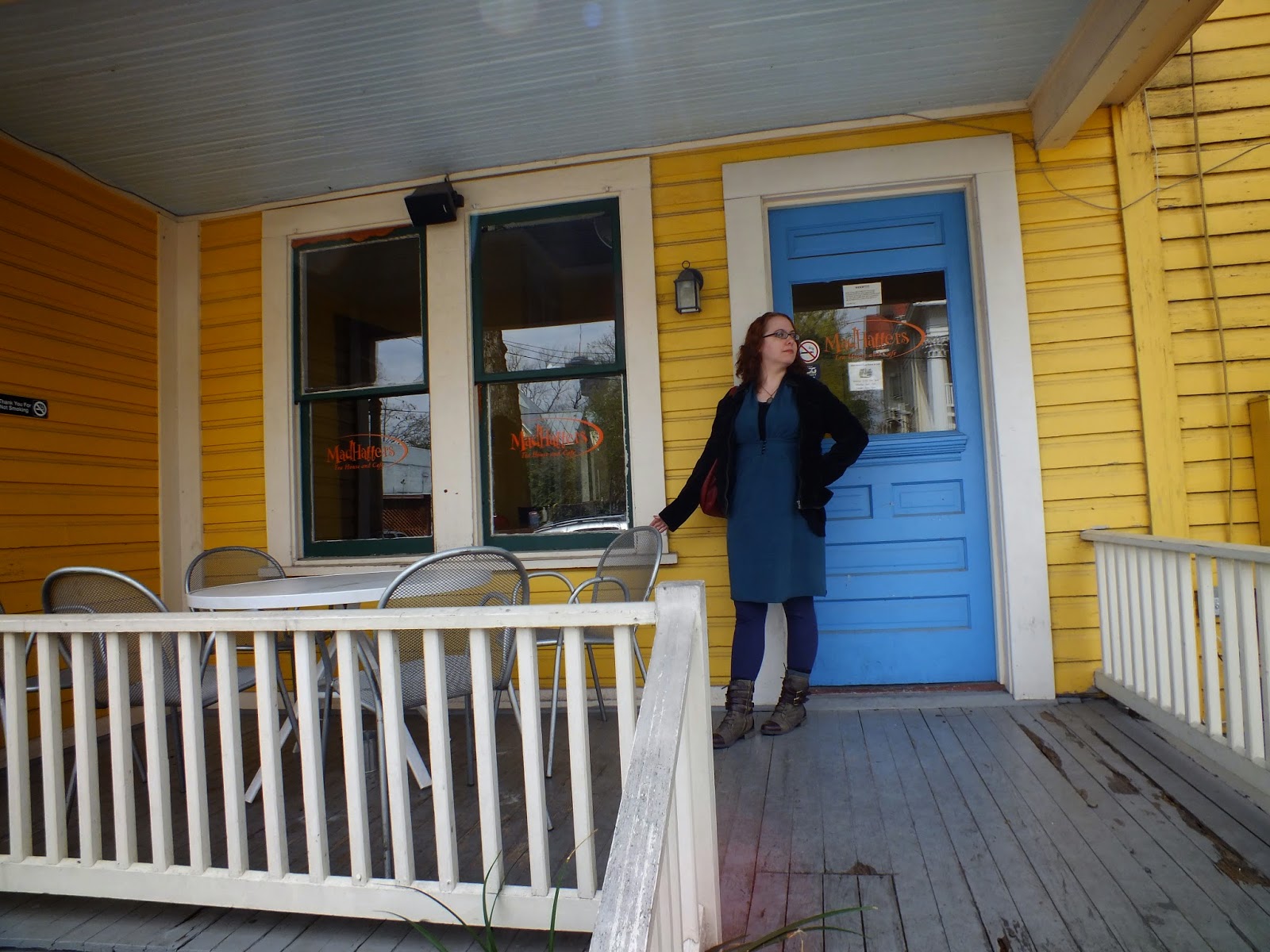 Look at the size of this place!  Bonnie went to a Bridal shower lunch not long after I'd returned to New York, and she had good things to say about the turkey sandwich.  I am glad such a place exists near Bonnie's new home.  Definitely drop by if you're around, though with the state heating up already I might recommend some iced tea.  More on that in my next post!
Posted by Catherine at 9:28 PM

Yay! Nice review of Madhatter's! I like the pictures you put in this post. I think Madhatter's is worth it for the ambience and the Good Hope Vanilla Rooibos. The food is ok. The desserts are better. Miss u schnap.