Coffee is my Stalker

Okay, I mainly chose the above title because it's hilarious to say out loud when you're trying to hide your native New York accent.
I have a mild case of paranoia.  It's mostly under control, as I know firmly that none of this is grounded (ha - coffee joke) in reality, but I tend to have dramatic relationships with objects.  For instance, I used to have an ongoing dialogue/rivalry with a copy machine in an old job.  It wanted to annoy me!  The street cleaners just had to pass me every time I left the house early.  Oh, and bicycles are coming to get me.  Ask my sister Bonnie - I'm often close to getting wiped out by bicycles when I attempt to cross a street!  Okay, that could be down to the growing amount of bicyclists in the city, but it sure keeps me on my toes!
If you're still reading, and not googling psychiatrists on my behalf, recently I find myself face to face with coffee nearly everywhere I turn.  It seems to be on the increase since I had to forbid myself from drinking caffeinated coffee altogether.  As you may had read in previous posts, I actually like coffee, but it's just not worth the side effects.  If I get a particularly aggressive craving, maybe I'll do decaf, but even that I keep to a rare treat.
(By the way, if you're getting deja vu to pair with my paranoia, it's mainly because I've written about this problem before.  It had abated for a bit.  Now it's back.)
So how is this stalking happening?  Here's just a few examples: last week I went to a Capital One Cafe in Midtown.  It's been there for years, though I think it was under another name before, but I'd never stopped in, and thought hey, I'm in the mood for a scone, let's do this!  All well and good, but as I was leaving, a lady working there gave me a paper swag bag - I believe they're closing for a couple of weeks and this was a little promotional reminder for their reopening.  What's in the bag?  A tumbler (nice), and a big old bag of Medium Roast from Peets Coffee!  I took it, because -free-, but I gave it away later.  That same day Starbucks had a man with a tray of little samples of coffee.  I did have that, and no other caffeine for the duration of the day.  I went to a coffee shop on Saturday - for lunch, not coffee, and of course a waiter brought a cup of coffee over to me, because my friend had asked for a fork.  This makes total sense.  Then yesterday I stopped into Starbucks for a banana loaf cafe slice only.  I had tea in the office, but wanted a little something, as one does.  In the short course of making my order and receiving it, three baristas asked me more than once if I was sure I didn't want something to drink (presumably coffee.)  What part of climbing up the walls do they not understand?
These examples are not the only ones - after all, it's the best season of the year (closely rivalled by spring), and Pumpkin Spice Latte ads are everywhere!  Did I mention I work in Manhattan???  Yep. 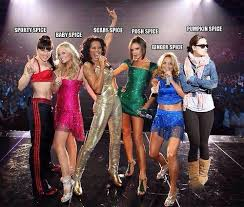 someone's out to get you Cath! muuaaaah (very poor imitation of an evil laugh!!!)

Seriously, I went out to lunch and they were giving out samples in front of Au Bon Pain!!! Aaghhh! Leave me in peace!!!

Yea Bon I know. It's rarely the taste anyway, but the smell that draws me in!