A Tale of Two Cat Cafes

I've had the inestimable opportunity to visit two cat cafes in the space of three months.  Imagine being able to combine a love of cats and tea, and even books - and not even paying that much for the privilege!  I mean, unless you count the airfare to London.

London and New York have a great deal in common, not least of all the problem of living space.  Unless you're loaded, being able to have even a decent sized apartment is a challenge, never mind a house with a garden.  Many people sacrifice a fairly proportioned kitchen, in-house laundry facilities, and other things most non-urban folk take for granted because location, location, location!  One of the greatest sacrifices, in my opinion, is being able to keep pets.  I'm a cat person, yes, but I'd love to have dogs (not to mention ducks), and the only reason I don't, besides the veterinary bills, is because I'd have to walk them in soggy weather.  I'd have more cats, but I stay balanced with one or two, because of cleanliness - and allergies.

Many have had to forgo even one cat because it's not allowed in their building - which is ridiculous because it's not like the cat is going to scratch the walls off - or because they split rent with someone who's allergic.  These cat cafes are perfect, then, because it possibly fills a gap in their life for a space of time.  Or like me, you just like to go and see more kitties because there's not enough of them on the Internet...

As you know by now, I had and always do have a good time in London.  The past two trips I was a solitary traveler, which isn't too bad, though this time I was happy to reconnect with a friend from visits past, and meet some new friends. At my Sunday meeting I found a lovely family who asked me to their home for a tea break.  Besides their hospitality, and the excellent cuppa you only find in a British home (can nearly replicate it in my apartment), I met the family's Jack Russell terrier and two hilariously adorable Singapura cats.  It was my second day, and already I missed Zenobia, so this was a welcome encounter!  Instead of being satiated, though, it made me look forward to Monday's reservation even more.

On Monday, I did something I rarely do:  I gave myself plenty of time.  One thing I know about London is that I still get lost far too easily, and hitting an area like Shoreditch was bound to be a challenge.  And it was.  I took a wrong turn, ended up on the opposite side of Brick Lane, and took an unnecessary train or two, but at least it was a nice day for it.

Got to Lady Dinah's a few minutes early, and those of us who had the 1 PM (aka 13:00) reservations were led into an anteroom where we washed our hands and were given brief instructions as to behavioral policies. Then we were in a cat Wonderland! 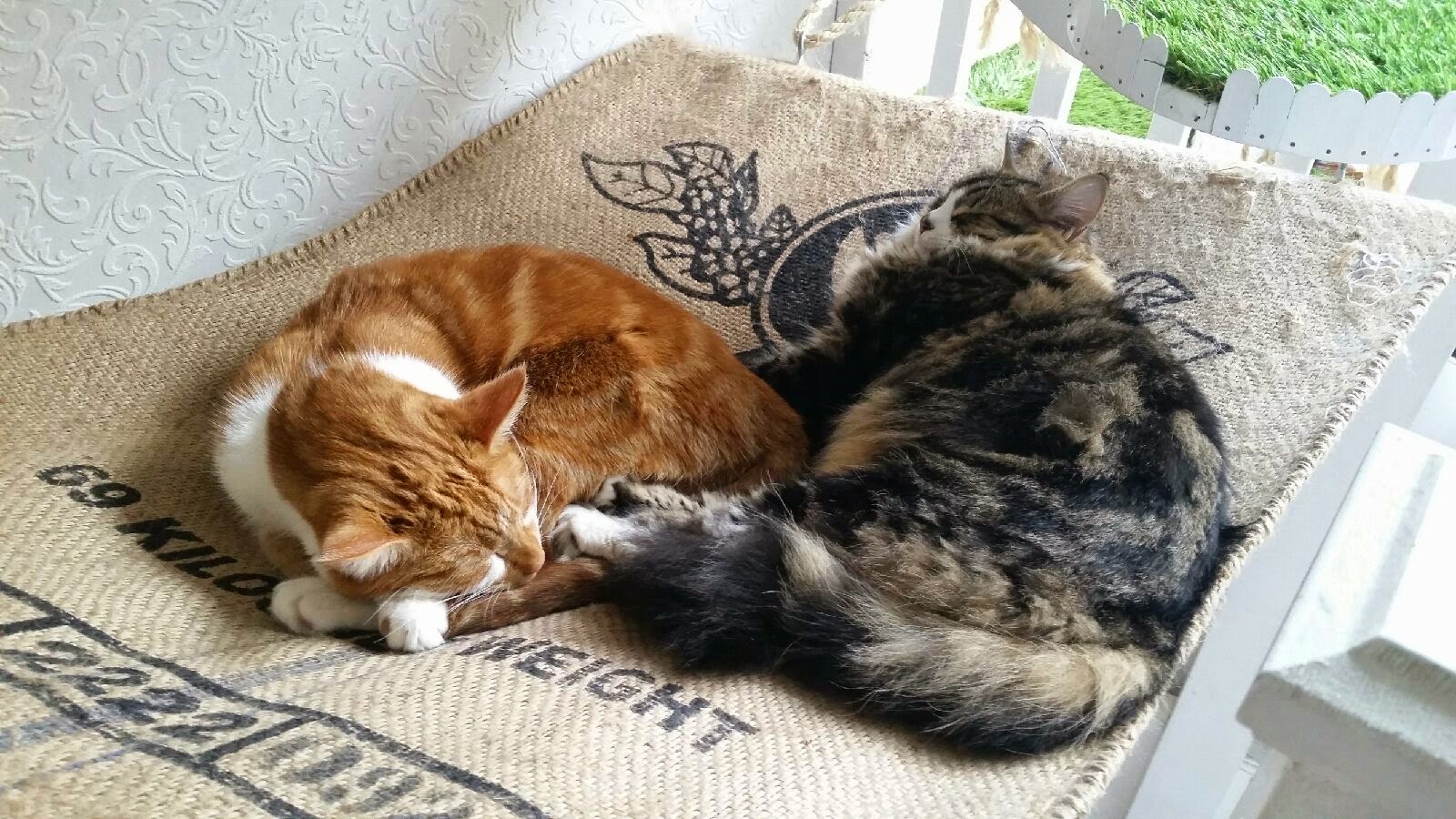 Normally, when I venture into a cafe alone, I want to be left alone, with my food, my drink, and my book(s).  Like a cat.  A cat who reads.  But this is a place where even cats aren't left alone (though you mustn't pick them up or wake them if they'll sleeping, them's the rules), so I attempted to tap into my social side for a few moments here and there. 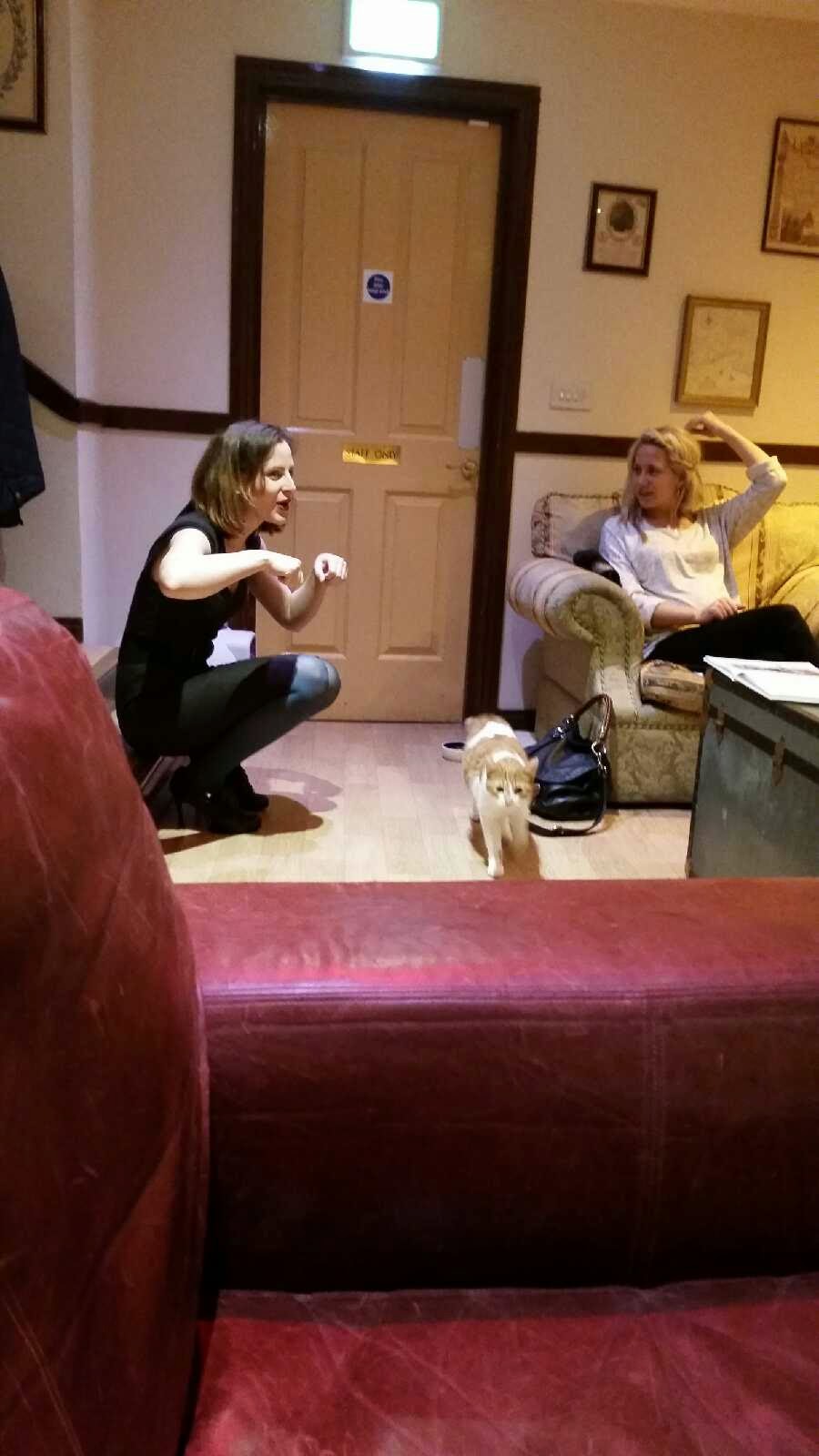 This is Donnie, the one that reminded me of Cinnamon, so probably my favourite.  The lady on the left worked at the cafe, and she was good at keeping the playful cats interactive, and answering our questions (mainly, 'What's his name?') 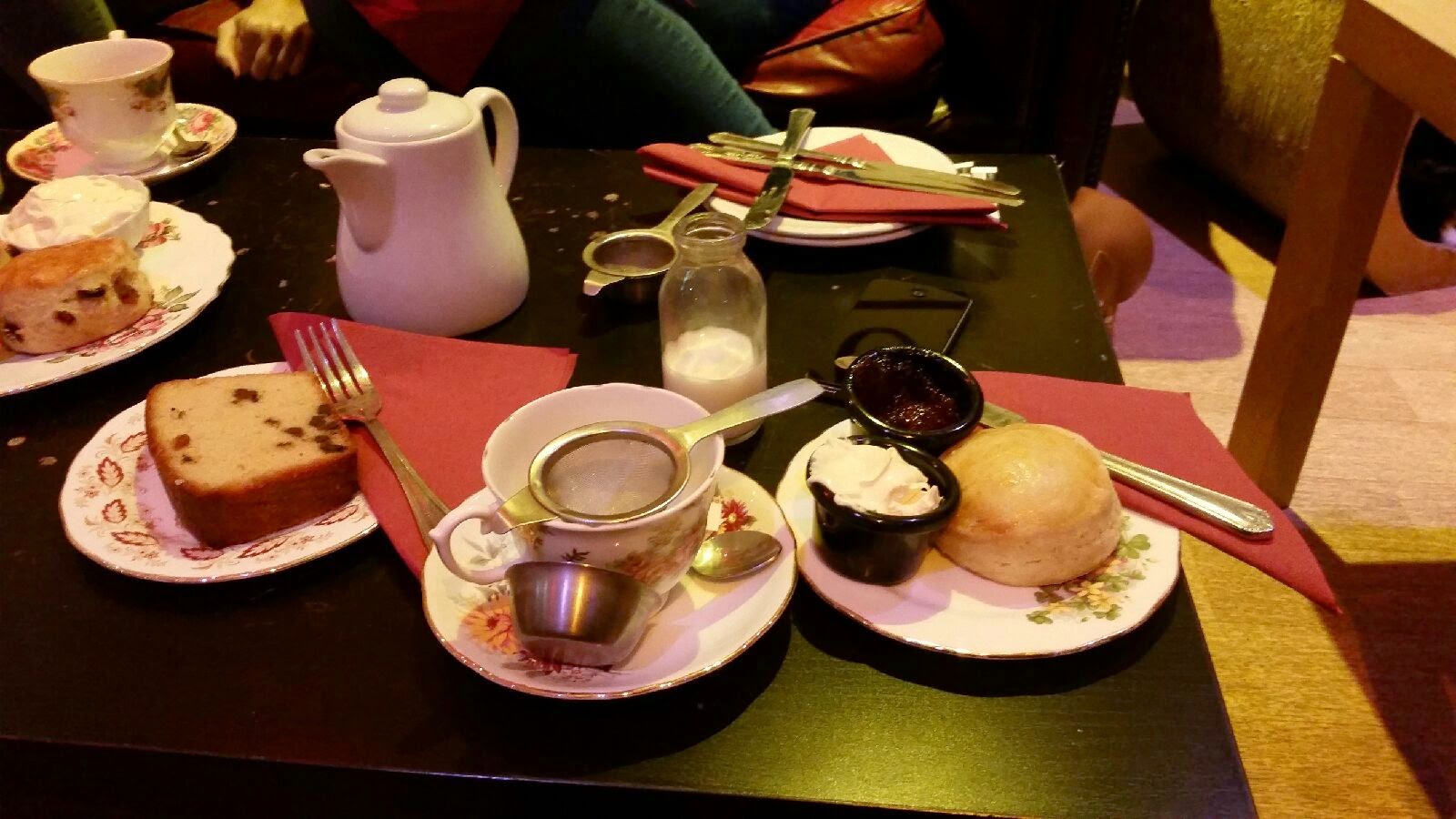 I was seated at a cozy couch, facing two sisters on a couch, and we shared the coffee table between us.  We shared photos of our own fur babies, as you do.  I'd already had a Full English Breakfast, so I couldn't go to town, but I think I got the gist of the place's menu.  Anyway, I was more of a Cream Tea girl on this trip than Afternoon Tea - the reservation is listed as Afternoon Tea, but ordering is a la carte.  So I had a cup of  perfect Darjeeling, excellent scone with clotted cream and jam, and a slice of cake - the Chocolate Mandarin Loaf, which is listed as Gluten and Dairy Free, and so tasty.  The cake would also pair nicely with an Earl Grey.

I was able to wander around the rooms too.  In most restaurants, even tearooms, that seems a bit forward, to say the least, but when there's kitties in every nook and cranny - well, you have to go exploring!  Plus, there's a fair amount of bookshelves, which is always fun for browsers.

An altogether fine experience, with my fill of felines for the week, until I got home and received a full dressing down by the lonely Zenobia. 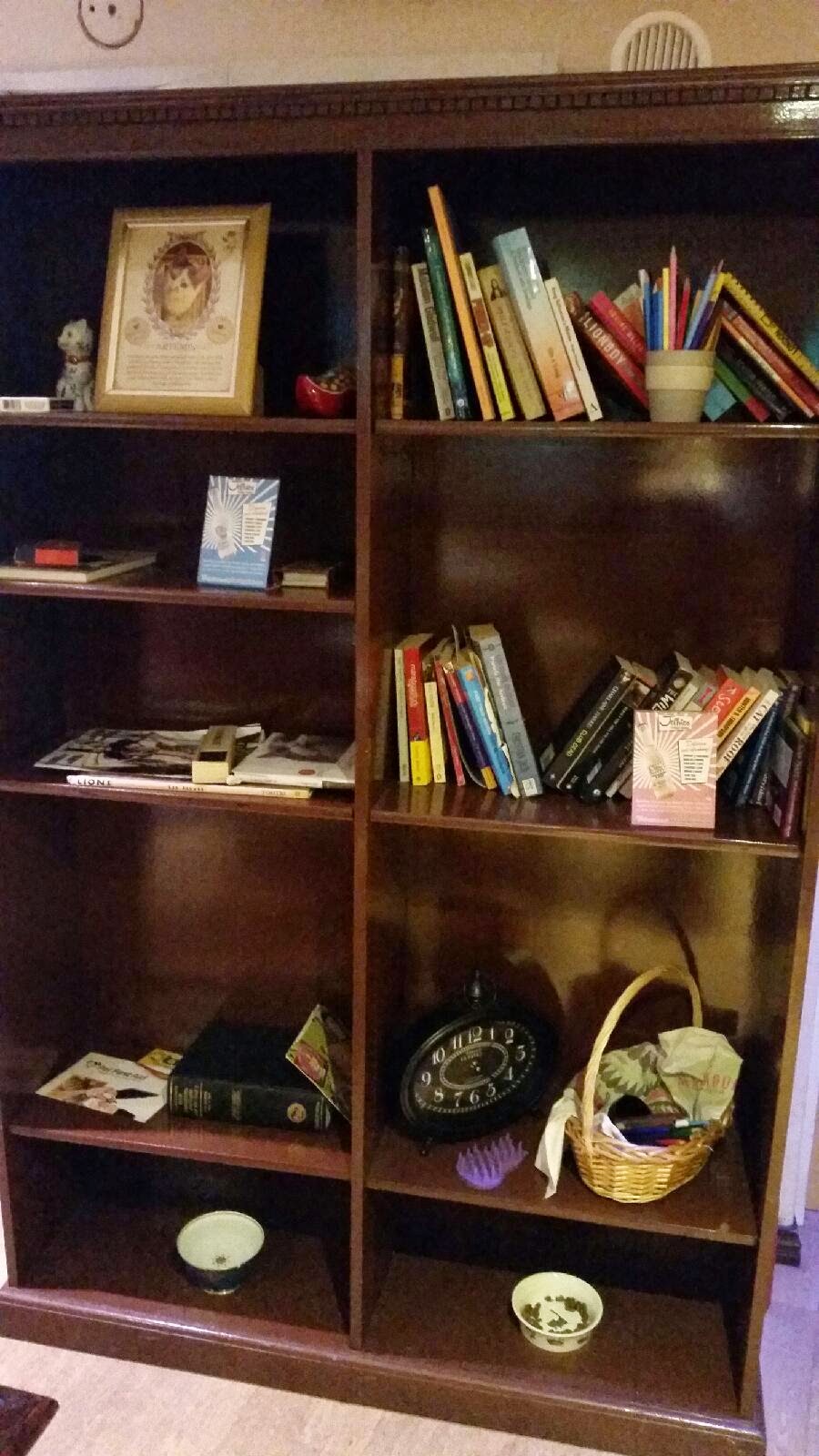 Fast forward two months, and we're in the dead of winter in New York.  The snow is no longer fun, and the cold is biting worse than a mean kitty.  It wasn't the kind of day I prefer to venture into the Lower East Side - a place I get nearly as lost in as I do Shoreditch, but I had a reservation and was meeting a friend.  I'm glad I didn't flake out.

Meow Parlour is a different kind of cat cafe.  There are rules to observe, and of course cats everywhere, but after that the similarities end.

You need to take your shoes off straightaway.  I'm not a fan of this, especially in snow boot weather, but I knew I needed to do this in advance, so I wore decent socks.  The Macaron Parlour around the corner provides the food, and though you can (I think) order from the cat cafe, we personally went to select our macarons.  How cute are these? 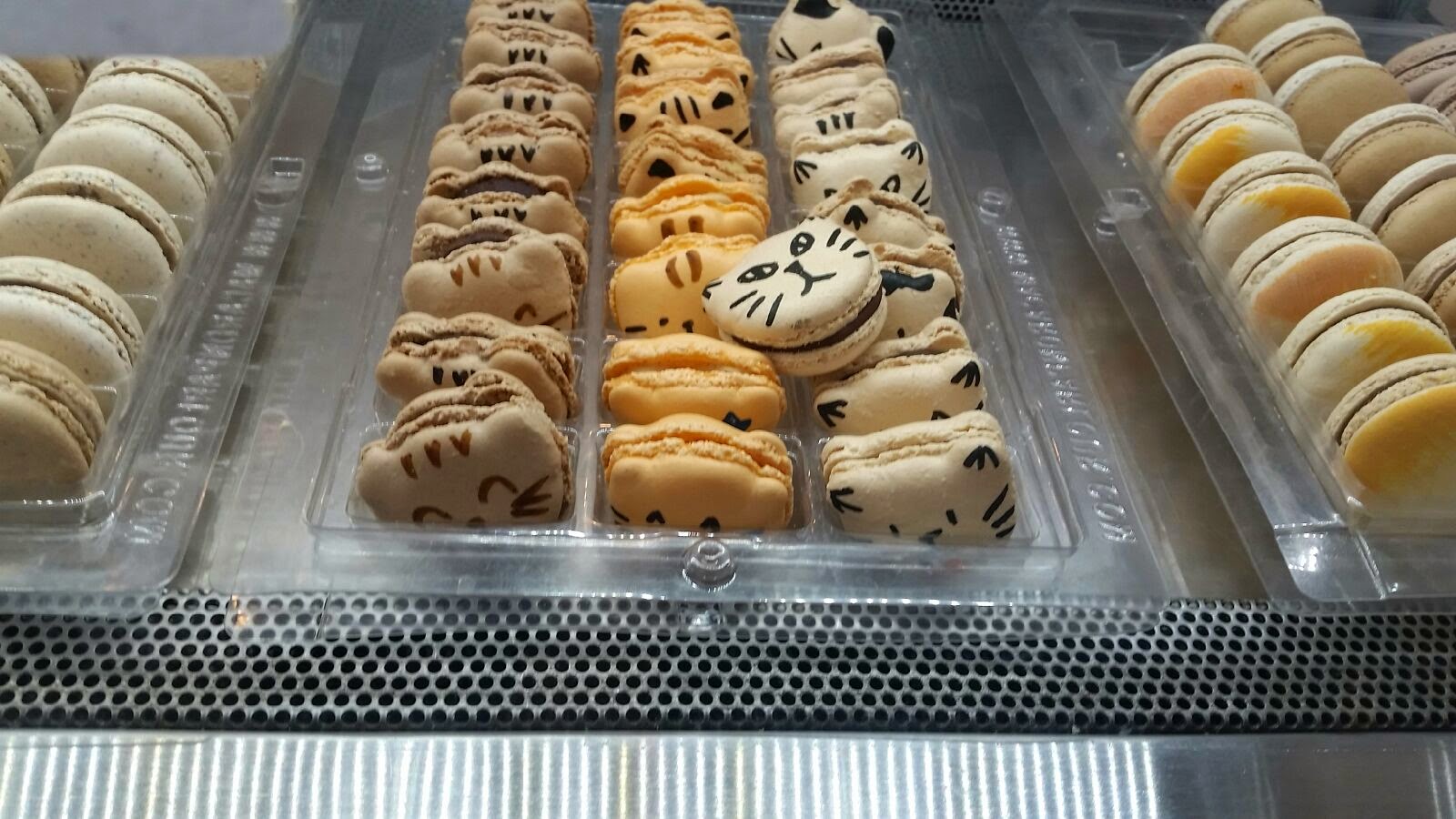 The tea was Harney and Sons, and I picked an herbal, which was good. I was recovering from an incident where I'd smacked my face into a wall in the middle of the night, and it took a bandaid and much more makeup than usual to look presentable, so I didn't need much in the way of caffeination.   There weren't as many food items to choose from, but then again, the reservation is for half hour increments, so you don't really need much. 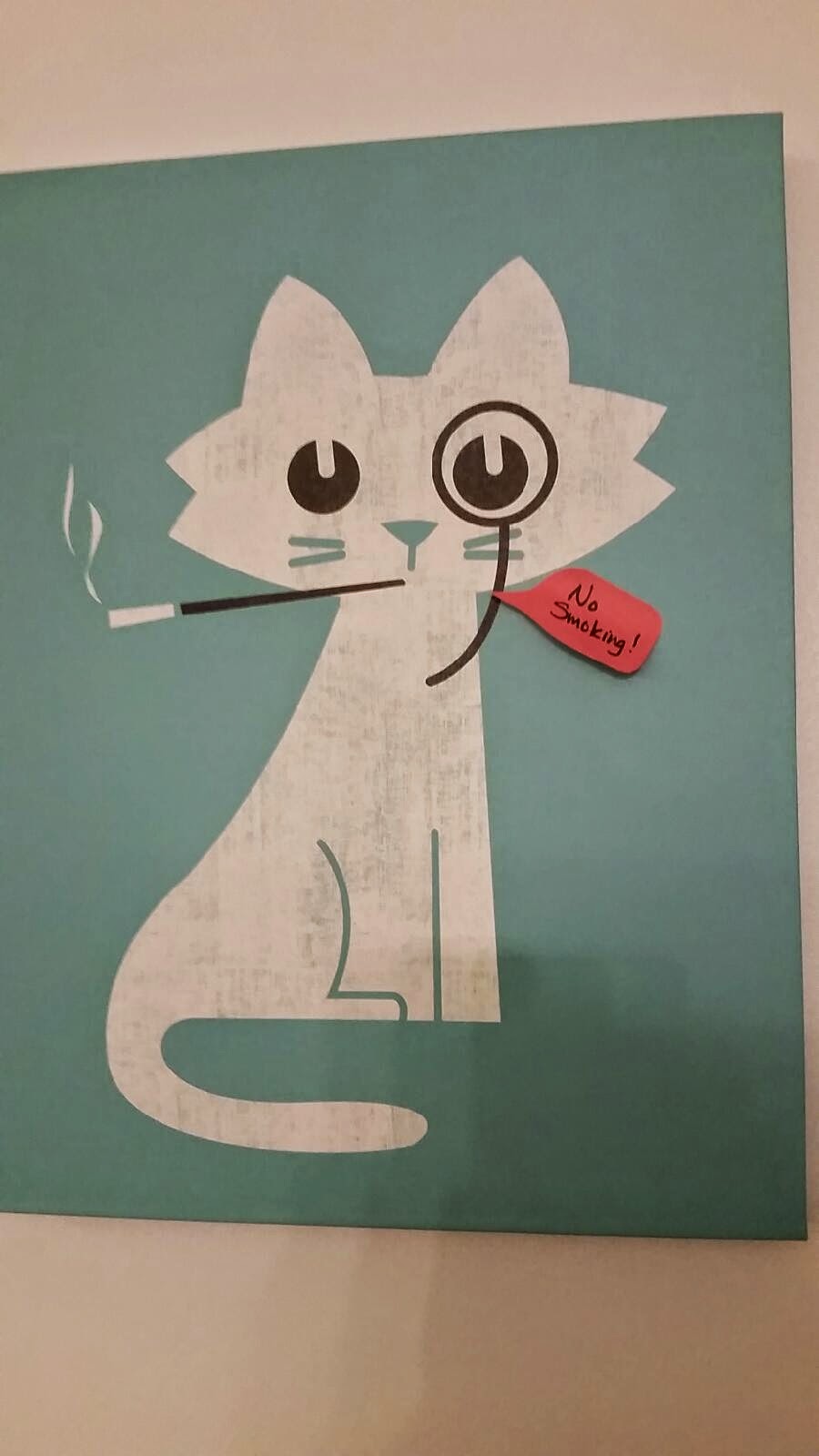 This was a one-room deal, but it was airy and the tables were more of a communal setting.  I mean, I shared a couch at Lady Dinah's, but that felt more plushy I think. 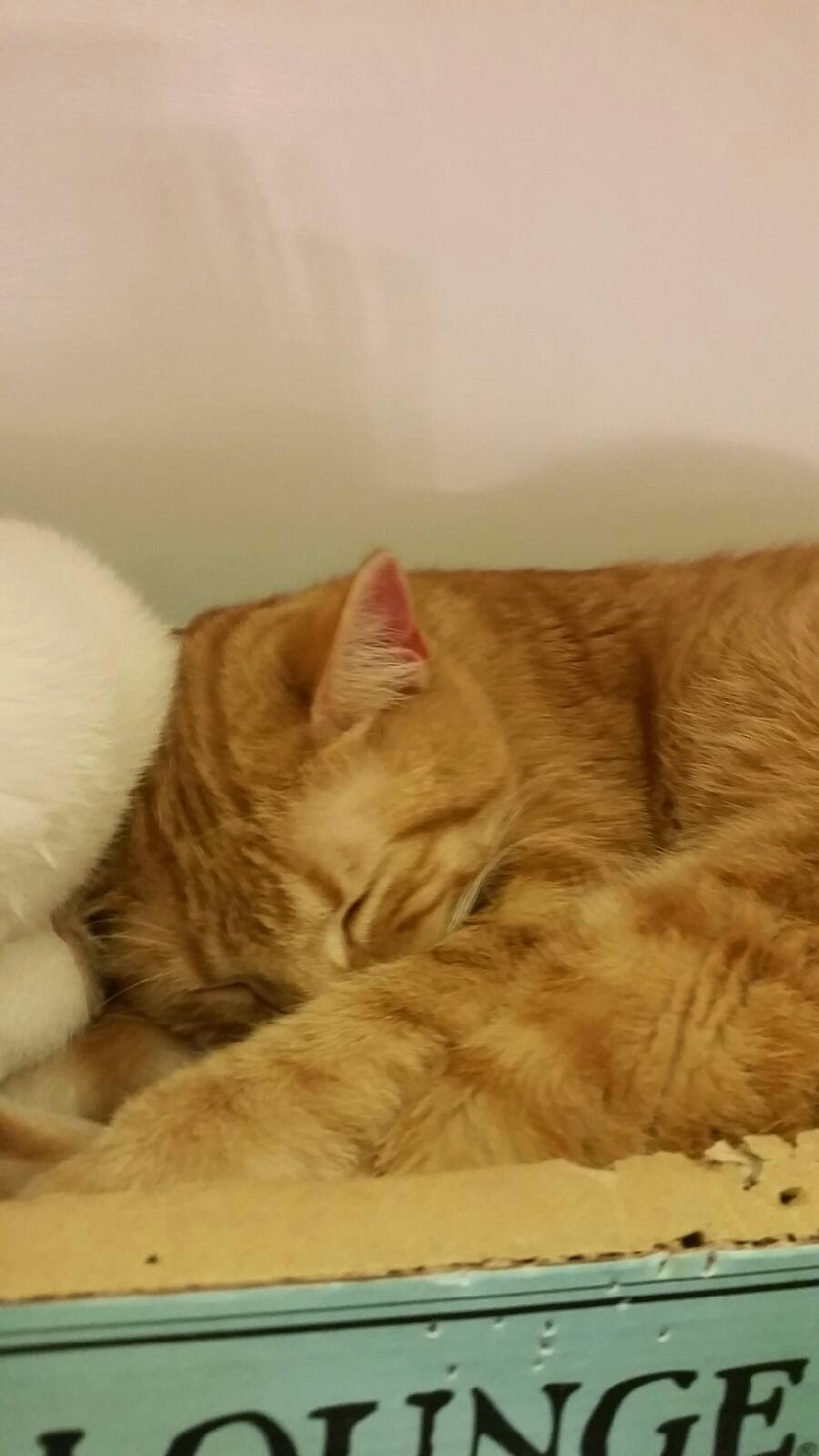 The other main difference I could see was that all the cats in Meow Parlour are up for adoption.  There's a process to it; you don't just point and say "I want this one", but either way, you know that though these cats are wonderful, and sweet and well-behaved, you might not want to get too attached, 'cause they may not be here next time! 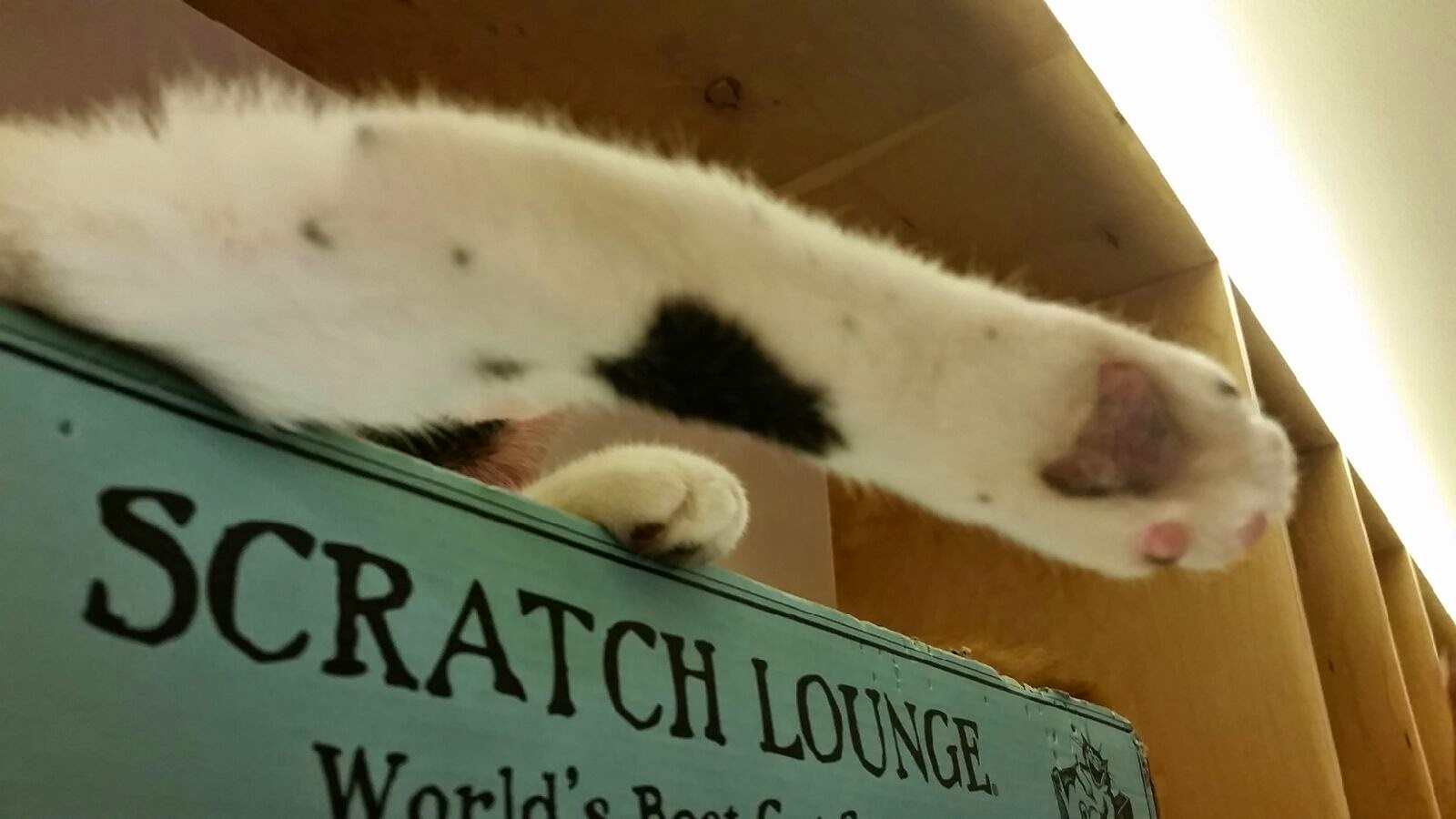 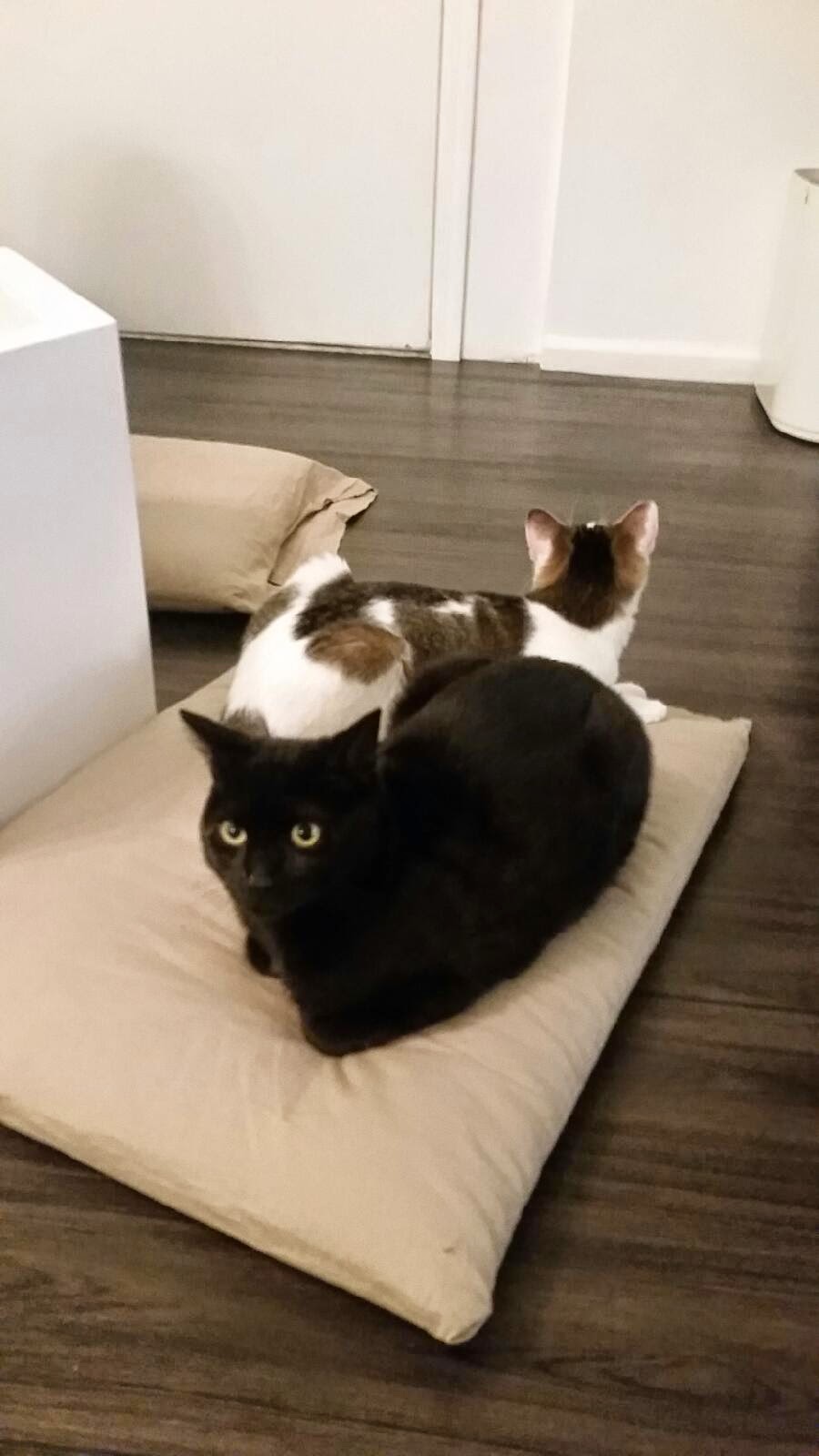 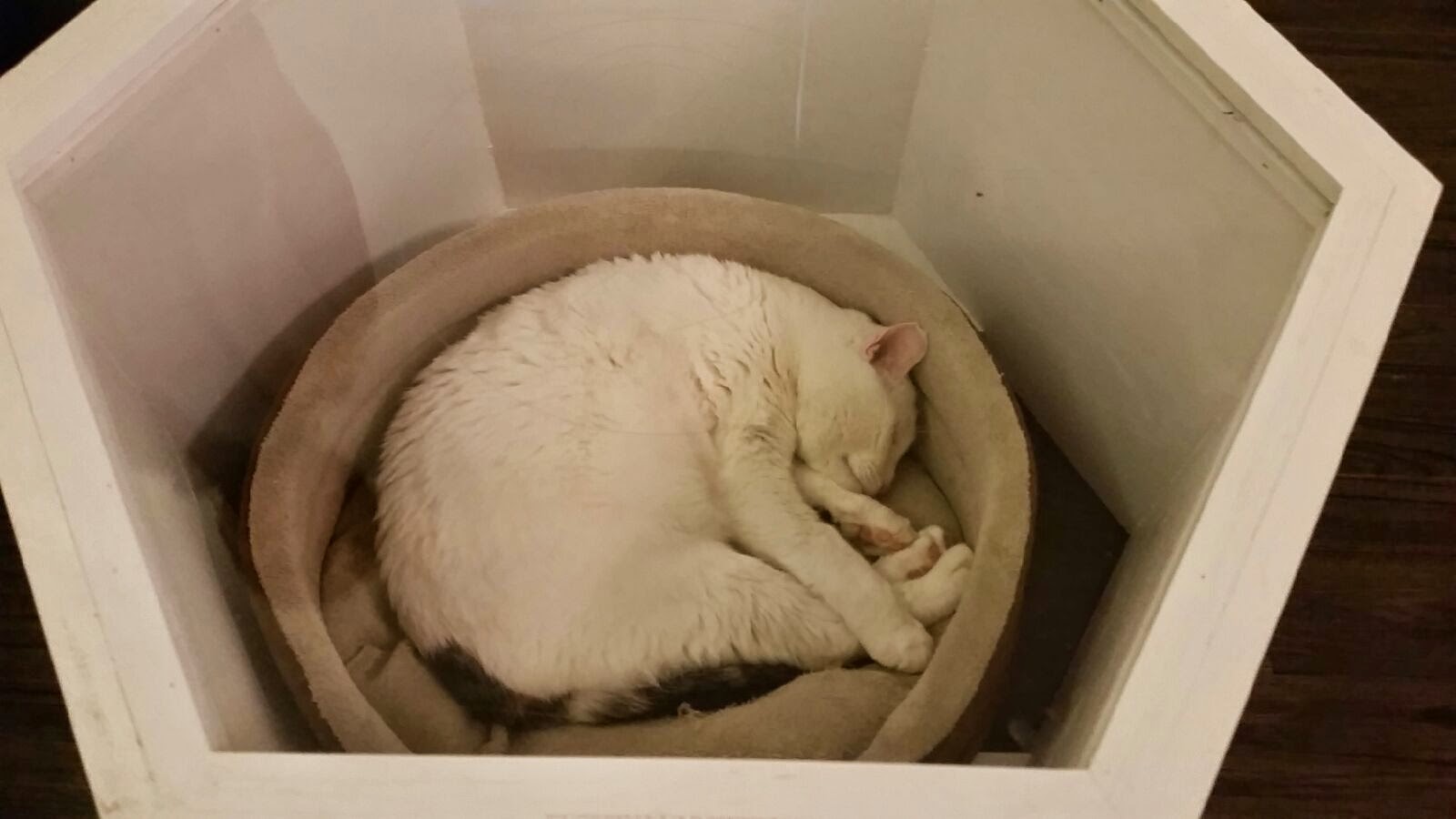 Both cat cafes fill a void, and I'm glad for their existence.  They seemed to fit their respective cities, and the cat/tea/book trifecta is fulfilled in each.

Your writing is superb! I like how you spelled favorite (after all, you were describing a British cat). And toe beans?! That's so caayuute!!! Did you "corn that" ?

Thanks Bon! I did not 'corn' toe beans. (Lol corn and toe...) it's a expression I adopted after seeing it in use on captions. It just adds to the cuteness, like toe floof.