Why I Love London

I'm not sure if I've mentioned this on my blog before (and I'm not about to sift through 11 years of posts to find out ), but I majored in Travel and Tourism in college.  Soon afterward I accepted my first full-time job, which was as a travel agent at Liberty Travel.  I was not a very good travel agent.  I mean, I tried, but the main problem lay in the fact that a career in sales is not suited to my personality.  So why would I have attempted this industry?  I wanted the perks, of course!  And there were some, but not enough to make it worthwhile for me.

Why am I bringing this up now?  Well, I believe that some may have the misconception that I'm not altogether interested in travelling.  Am I fearful of flying?  Not really - I have issues with motion sickness, which is easily rectified on a flight, and crowded, cramped spaces are not my favorite, but otherwise I'm okay with flying.  The smell of an airplane actually excites me when I sense it elsewhere, as it holds so much promise.  However, I am known for usually singling out one particular location, to what some may deem ad nauseum.  You don't have to search 11 years of posts to figure this one out.

I love London.  Absolutely love it; and any year that consists of a visit to London automatically becomes one of my favorite years, despite other difficulties/heartbreaks/depressive periods/passing out in the office bathroom incidents.  Does this mean I disdain travel elsewhere?  Nope - I have a decent bucket list that tops off with Italy, Iceland, Japan and the Pacific Northwest of the U.S. and keeps on going.  So why don't I go anywhere else?  Well, I do, sometimes, and would do so even more given the time, money and willing travel companions. At times, all it takes is for a BFF or sibling to relocate, and I'm off to the websites checking fares (Texas, anyone? Florida?)

Again?  You may ask.  Why?  I mean, I shouldn't have to explain myself.  The Doctor, one of my favorite fictional characters, has the ability to go anywhere and still finds himself more often than not in London.  Still, let's look at why I love this particular location, and why I am returning there once more, in no significant order.


History
I did not excel in history as a subject during my school years.  I'd like to blame the teachers, but they may have been working with a limited curriculum.  When I was in my twenties, I began reading historical novels and non-fiction histories with quite the passion.  With the exception of a few biographies, I didn't get in American history until my thirties.  Perhaps I'll turn to African history in my forties - anything's possible!

Of course, British history remains my favorite, and London is bursting with it.  The streets just sing their stories, and the plaques on what feels like every block, telling you which of your favorite writers once lived there keep one well informed.  All you have to do is walk...

Walking
Something New Yorkers and Londoners have in common: most of us enjoy a good stroll, at a nice, quick pace. I clocked 30,000+ steps one day on my Fitbit on Trip 9, and I took in so much.  There are guided walking tours, or you can just make it up as you go along.


Food
This is the one that gets the most confusion from people..."but British food is the worst!".  Well, personally I disagree, I think Britain took a while to emerge gastronomically from all that rationing over half a century ago.  I consider British food (most of it, anyway), to be comfort food, and on top of that, London is one of the foodie capitals of the world.  So there.


Saving Those Pence
Just bear with me.  London is a pricey town, just like New York.  Real Estate is obscene, and the exchange rate has me reaching for the smelling salts.  Even so, if you look, if you just make a tiny bit of effort, I promise you, there's bargains to be had in dining and shopping.  And if the weather's good, you can have a reasonably priced picnic in one of their epic...


Parks!!!!
Central Park is my homeboy, but I have to say, London outclasses everywhere I've even been with the sheer magnitude of park space. You never have to wander far to escape the hectic city pace.  Some parks are more about trees and general greenery, some have sweeping views of the city, some are floral delights, and most have a variety of duckery and geese (and some crazy swans) that one never find in CP.  I mean, I love me some mallards, but come on!  So at nearly every point of one's wanders in London, you can take in some fresh air, or just relax on a nice bench (yes, some royal parks have fees for this, but whatever), and chill with a good book.  Speaking of which...

All the Bookish Things
Many of my favorite books take place in London, at least at some point - it corresponds with my loving history and the English classics.  British literature is food for my soul, and I am satiated in London.  One can visit the homes of favourite writers (follow the plaques!) Also, there are more bookshops to explore than I can even list here.  In my last few visits, I still encounter book ("real" books - more on that in another post) readers all over the Tube, and elsewhere.  They're here in New York, too, but it just seems more visible - perhaps it's the rose-coloured lenses I see through in the UK.  Oh, and there's a book barge - which I can't wait to report on!!!


Tea
This corresponds with food, because most of the things I like to eat in London pair well with tea.  The tea itself, even the grocery store bagged ones, seem to taste better in London and the rest of the UK that I've been to.  Perhaps it's the water - it does make a difference, after all.  A decent cuppa is more available everywhere, too.  Not every Londoner is a tea drinker; in fact, there's a mass of coffee chains we don't see in the U.S., but it's still everywhere.  This pleases me.


Pubs
This also goes for all of the U.K.
I like pub culture, and I'm not even a big drinker.  There's something cozy about it over there - I mean, sure, there's places where people get drunk and act out, but there's plenty of spots to just relax with some friends or a book.  Some pubs have bookshelves to choose reading material, and not as ironically as you might find here.  I don't count Shoreditch in all this, for all my love for their cat cafes.


Art Stuff
Museums everywhere, and most of them free admission.  Some decent gift shops, too.  I always return inspired. 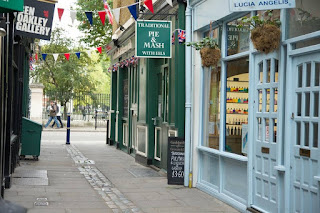 And let's not forget the Day Trips: Greenwich is counted in this, though it's a bit close for that reckoning.  One can take a train to Cardiff, Oxford, Bath, Hampton Court, and countless other places that are pretty cool, and be back before dark (at least in the spring and summer months.)

Finally, they film a lot of my favorite British telly in London (and Cardiff, did I mention Day Trips?)...I could run into a Sherlock filming, or at least visit places they previously filmed at.

I think you know what to expect in upcoming posts!

Posted by Catherine at 1:30 AM

London ranks VERY high on my bucket list since moving here to Europe :)