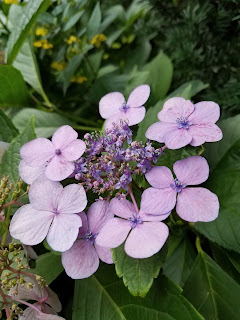 There are a few subjects that those close to me know will get my hackles up: if said subject is raised, then raiser must brace for a rant.  Two such subjects are the lack of proper garden/park space beyond Central Park (especially in Manhattan and Astoria), and the loss of New York as a personality (aka gentrification/homogenization.)

The first complaint likely stems from where I am located, both residential and in place of employment.  As an Astorian, one might argue Astoria Park is nice, and it is, technically in Astoria.  If, however, you are in walking distance only because you're a crazy long walker, it might be a stretch.  And let's not forget I don't drive.  I work in Midtown, and despite finding out that the area now  known as Rockefeller Center used to be botanical gardens, somehow it's not enough.  Bryant Park is almost close to my office, but not quite.

I'm not a science/medical major, but I'm pretty sure being surrounded by flower, trees, and grass is good for the soul.  Even though I'm not soul-satisfied on a daily basis, I am thrilled to find tiny escapes from the concrete madness that I call home.

One of my favorite walking areas in Manhattan is the West Village.  Though it has lost some of its flavor to the above-mentioned homogenization, a stroll can still uncover charming, slightly old-school areas that are wonderful to visit, even if living there is long past impossible.   Also, it's a good Teaborhood, which is a word I just made up and don't know if I like yet.  But remember: Tea and Sympathy, McNulty's, a branch of Davids Tea, Porto Rico, Bosie Tea Parlor are just the ones that first spring to mind.  I didn't think of it as a green escape though.  Now I have a reason to!

I've passed the gardens of Jefferson Market often enough, but never saw it open to the public.  I suppose the timing was always off,  but on on recent evening, while running some errands, I passed by and it was waiting for me. 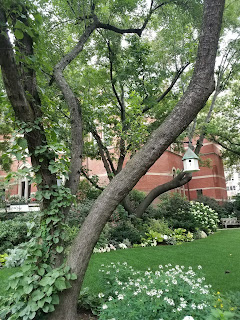 I was more shy than usual about stepping inside, at first, because I could not believe it was open to the public.  It feels like a private community garden, the kind I'm rarely allowed entrance to.  But I shook off my trepidation, and boy am I glad I did!

Not pictured: the benches placed out of the way, so that a visitor can relax and take in the beauty in relative peace.  There is always a need for this!  The only downside is that you can't bring outside food/beverage inside, so there's not taking tea in the garden.  I'm fine with this, of course, as it must contribute to an easier upkeep.

The garden is beside Jefferson Market, which has served many functions historically but is now a public library, so we have a pairing right there.  The tripling is tea/books/garden, and I'd add whatever your favorite animal is, but we take what we can get when it comes to real estate in New York.  You could try having your tea at any of the places (see above), then strolling it off in the garden.

Jefferson Market Garden is open from April - October.  Do visit if you get a chance.  Your blood pressure will thank you.
Posted by Catherine at 12:20 PM

I like teaborhood ��
And let's go there if it's still open on our next visit!