In the small world of my childhood (not my fantasy world which spanned the globe, or at least the Prairie), a walk past Broadway on Steinway Street was equivalent to a road trip. Nowadays the streets past 34th Avenue are teeming with shops and restaurants, especially since the opening of the movie theatre. Back then, it was something that King Kullen was there. Anyway, there was a children's shop called Valco (thanks for remembering the name, Pam) between Broadway and 34th. It wasn't particularly glorious, though they did sell Cabbage Patch dolls - I saw the first Preemies there. But they did have a display of Little Miss and Mr. Books. I think these books were designed to teach adjectives to children. They were so simple but slightly unusual. My first one was Little Miss Scatterbrain. I still identify with her sometimes. I also like Mr. Impossible. He could read books upside down. When I realized I could do the same, I thought I had superpowers. Now I realize it's rather low on the skill level. Darn. 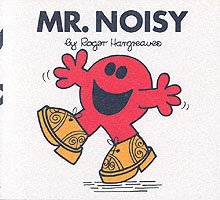 Posted by Catherine at 4:32 PM

I can't relate to these. I've never seen them before. But I've meaning to say, I thought of you the other day because they're selling "The Monster at the End of this Book" at--strangely enough--DUANE READE on Steinway.

Keep these post coming... they are so refreshing form the adult world of complexity.
I must be old...none of these books look familiar, though they look as if they would have been interesting.

That is strange...DON'T TURN THE PAGE!

I totally remember those books. I remember one in particular where the character lived in a tree; there was a door in the trunk that he'd walk into...I thought that was so cool.
Reading has always been a passion for Gata and me.

Dang! I should give a prize for the times someone finds a typo on my blog. I think I'll keep it there for nowt.