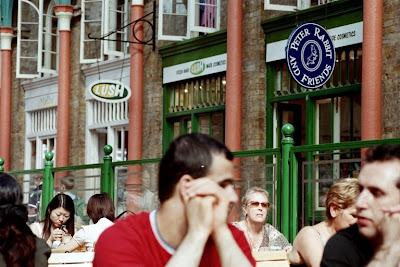 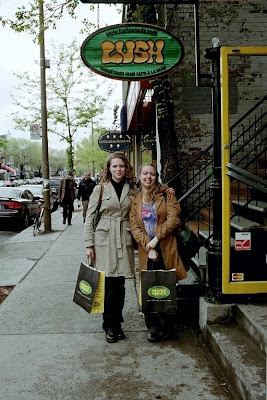 I found out that Lush Union Square is opening next week. Though I'm not falling out of my seat with the thrill of it all, it did bring back some special Lush memories.

It all started on my second trip to London. It was the last day of the trip, we were on Carnaby Street and Cecile wanted to check out some soap store. I videotaped Marie looking kind of bored, and I must admit so was I. We were frankly shopped out. It took a great deal of effort to close my luggage that day. I'd bought tea, teapots, articles of clothing - not to mention shoes, and sadly some cat food. (There were Whiskas flavors that didn't exist in the US. The kitties never thanked me: they probably thought I was pretty dumb to waste money and luggage space on them.) Like I was saying, the shopping end of our trip was over. Still, something about the shop lingered in my mind...

It was the Lush smell. It is the signature scent that identifies Lush within a block of wherever it is located. This was way before Lush came to New York. So, since there was a Lush in Covent Garden, a place I'd newly fallen in love with, and then Carnaby Street, and possibly one in the airport, leaving a trail of a very pleasant scent...the smell of Lush equalled the smell of London in my subconscious. More than anything, smell brings back a sense of nostalgia to me. This hadn't quite added up in my stream of thought; at least, not yet.

Moving forward, when planning a fourth trip to London, I read about Lush in a guidebook and thought it kind of seemed familiar. This time my travel companion was Bonnie, who is to lotions and shower gels as I am to tea. It was inevitable that we were going to check out Lush in earnest. We went to the one in Covent Garden, and this time my luggage (a red suitcase practically the size of a refrigerator) was stocked with bath bombs, soaps and powders. I specifically remember Bohemian soap, which is still my favorite with its lemony loveliness. I was fully infatuated with Lush, and finally realized the smell connection when upon my arrival home I opened my suitcase and smelled London, I mean, Lush. To me the two were synonymous, particularly regarding the Covent Garden section.

Within a year the products were used up. Of course the products retain their true freshness only for a few months, because they use natural ingredients, but I stretched my items for as long as possible. When I'd finally run out, I pined hopelessly, occasionally looking at their website and catalog. I kind of did the same thing for Whittard teas.

About two years later Bonnie, Rustom, a friend and I went for a weekend in Montreal. We made it a point to find the Lush there, and we knew we did when The Lush Smell wafted into our nasal passages. Bonnie and I went, um, ballistic as we stocked up old favorites and new ones. I was introduced to Buffy the Backside Slayer, which is noted for treating the wobbly bits. Not that I have a problem with that, you know. There was a casualty or two on the road trip home (you have to be careful with certain products as there is a possibility of melting.) Nevertheless, the Lush on Rue St. Denis was a top highlight of my Montreal trip, as well as the one a few months later.

Finally I returned to England, with my friend who had accompanied us to Montreal the first time. On our first full day there, we headed to Kensington High Street, already a favorite street of mine. It had lost some of its appeal when the Kensington Market ceased to exist, but now there was a Lush store, and I was a happy camper. (Yes, I say happy camper. I'm folksy sometimes.) At this point a store had also opened in San Francisco, which gave me some hope, so I asked one of the sales associates if there were any plans for New York. She confirmed that it was in the works. As soon as I left the shop (which took awhile), I found a payphone, incidentally near the Muffin Man, and phoned Bonnie to give her the good news. Oh, in case you aren't convinced that I'm a madwoman, this event occurred four years ago today. I have a freaky memory for dates.

Patience sometimes pays off. Though I fed my addiction with an online purchase, nothing really equals the experience of handling the products and smelling them before buying. It's special.

Like the geek I am, I visited the first Lush New York location a few times before it opened. And you know I was there the day it opened. With Bonnie. I spent chunks of money, I admit it. I was obsessed, and wanted to try every product they had. I visited Lush Herald Square frequently in 2004. I dragged everyone I could along with me, including my Dad, who managed to get glitter on his face as a result. Though he couldn't understand my spending so much money on bath products, he did seem to get a kick out of throwing the bath ballistics into the tub. He'd say some line from his days in the Marines, and then launched. It's fun to watch it fizz around.

Well, within a month after the grand opening, my bathroom smelled like Lush. I clocked far too many hours in the bathtub, and I spent more time in the 34th Street area than I'd done when I'd interned in the area. Then I lost my job and curtailed my visits.

I got a job in midtown, but even so I can't say I'm always heading for Lush. I'll always love it, but there is such a thing as too much of a good thing. However, I was quite surprised when I found out they'd opened a Lush in Queens...literally across the street from where I was born! This is the location I frequent the most nowadays.

You always know you're in the right place when you smell that smell. Like Toucan Sam, I just follow my nose, and there I am. Even last year, I knew I was in the right part of Washington DC when my nose was graced with a whiff of heaven. A block later, there was the famous Lush logo.

But you see even now, wherever I am, when I smell Lush I feel transported to London. I also felt that way in the Upper West Side location - well, it was raining and we were about to have Afternoon Tea. When I go to the Union Square opening (did I mention it's a block down from the Tavalon Tea Shop, and a short walk from Tea and Sympathy?) I'll be transported once again.

I haven't even rhapsodized about all my favorite products, except perhaps the Bohemian. Would that make it a (fill in the blanks, you know I'm doing a corny Queen reference)...
Well, here's a list: Ocean Salt, Dream Cream, Avobath, Blackberry, Rock Star, Waving not Drowning, Karma (all of this line), well, I can go on and on.

I loved the B Never Too Busy shop in Carnaby Street: it's the makeup version of Lush, and such a fantastic shop. They may never open in NY - perhaps that's good, I should have something to look forward to when I return to London.

Posted by Catherine at 6:24 PM

Cathy
Welcome back. I have never heard of the brand Lush before. Do you think they have any stores in upstate NY? Keep cool this week it is going to be a scorcher.

Lush has new openings in the US every week it seems nowadays. It hasn't reached upstate as yet, but if you ever take a trip down here, or to Montreal even, you'll find it. It's worth a visit.

Lush has new openings in the US every week it seems nowadays. It hasn't reached upstate as yet, but if you ever take a trip down here, or to Montreal even, you'll find it. It's worth a visit.

Marie said...
This comment has been removed by the author.
11:47 AM

I'm waiting for Lush to get to Miami, because Orlando is just too dang far away from me. My basket of bath bombs is running low & since it's been hot out, I haven't been wanting hot baths. When the Miami one opens up, I'll stock up. Ocean salt is a great exfoliator.

Yay! We have got to go to the new Lush. Not that I need anything (you've seen my stockpile of lotions and soaps) but who cares?
I think I might buy Dream Cream to go with my Dream Wash.

BTW - Your Dad anecdote had me all teary at work.

u would make a good slaes rep for Lush, with your Proust memory call...

I suppose the bath ballistics are my own personal madeleines...

Oh the cupcake! Love in a mask!

I have to get me some of this Lush stuff. Sounds wonderful.

you sound like a bunch of lushes for lush ;)