Sunday in the Park with Gata 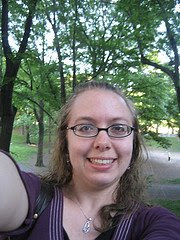 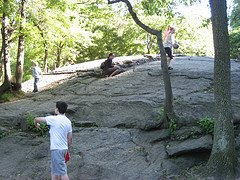 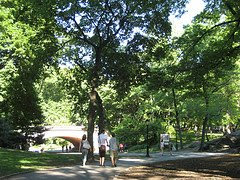 Anyone who was in NY this weekend must agree that the weather could not be improved on. It was perfect! I wasn't feeling too hot on Friday morning, but I forced myself to take a walk. My reasoning was that all year long I complain about the weather, and here my ideal climate's just waiting for me outside - there's no excuse to stay indoors. I must say I felt better afterwards.
On Sunday, I checked out the Superhero exhibit at the Met. It was a little crowded, and you couldn't touch anything, but it was still fun to see. The concept was the influence of superhero/comic book costumes on fashion. I failed to see the relevancy as all the translations into fashion were unrealistic anyway. Anyone wearing such items would be pelted with eye-rolling if they tried to ride the subway. In short, you'd better be able to fly or run really fast if you're caught wearing these outfits.
After such contemplations I took a breather in Central Park. I found a lovely tree near the Great Lawn that had vast amounts of shade - its branches nearly reached the ground. I spent at least two hours sitting there, reading, writing, resting...and realizing you don't always have to hop on a train to reach a relaxing destination. I guess I picked a good time to be there. It wasn't crowded at all, but not alarmingly desolate. I heard the distant sounds of a softball game going on, which was accompanied by the haunting barks of two bloodhounds nearby, but nothing penetrated my sanity. In lieu of having my own backyard, this was pretty acceptable. I ended up walking down to Columbus Circle - must see Borders whenever possible - and I still had energy to do some housework in the evening.
Sure, it's grossly humid out today, but I'm truly grateful for a peaceful weekend in my own City. Yesterday was fine too, but at that point I felt kind of spoiled with all the free time.
(Isabelle, and Mango Indica)
Posted by Catherine at 2:54 PM

Lazing on a Sunday afternoon, huh?
Don't think you'll be bicycling on every Wednesday evening any time soon, though...

Sounds like a lovely day. I miss Central Park, although when I had it close by I rarely went.

Steph: Sorry you're feeling homesick. Moving is not easy. But the way we did it gradually really helped.