This year I entered the wonderful world of Grouponing.  A number of websites have developed that offer you daily discounts in the form of online coupons.  I use Groupon and Living Social, but for the sake of simplicity I'm going to use Groupon as the go-to term (think of it as the Bandaid of online coupons.)  I've gotten discounts at Barnes & Noble, a bakery, Whole Foods, and of course a bunch of tea establishments.

It's a marketing strategy, of course: businesses want to attract new business, or bring back past customers, and the best way to do that is to make the customer feel that they're getting a good deal.  As in "I'd never in a million years get a bikini wax, but I saw a Groupon for 65% off, so...OUCH!  Well, at least it wasn't full price."

In my case, tea places are constantly opening in New York, and this gives me more of an incentive to try new places.  So over the next few months, I will have reviews connected to my Groupon splurges, in an effort to see whether or not it's all worth it.

This brings us to Teany.  Since 2003, I'd been to Teany a good number of times.  It was one of the few ways to get me to the Lower East Side, and one of the only vegetarian restaurants I could be said to frequent.  I'd gone there with a variety of friends, but mostly Bathy, who was delighted with their scones and even entertained fantasies of working there.   Their Afternoon Tea was first-rate and very reasonably priced, their tea list was extensive and their playlist was fantastic.

Then there was a fire.  This closed the shop down for about a year.  I wondered if it'd ever come back, but I didn't quite mourn it.  After all, I still had my standards: Tea & Sympathy, Alice's Tea Cup, and new favorites like Radiance (which I have a Groupon for, stay tuned.)  Plus, since Teany's neighborhood's not in my path, I didn't exactly see it regularly, so I could pull an 'out of sight, out of mind' mentality.  It took me many months to even find out it had closed.

When it reopened, though, I let myself become excited, and the first return trip was a good one.  My complaints were only mild, which I could say for almost every place I visit.  The next time was not as good.  I found out they'd stopped the practice of Afternoon Tea, which rather turned me off to returning.  I figured if Bathy wanted scones I might go with her.  Then I found a Groupon offer: for $5 you get a $10 coupon.  It seemed Teany was trying to woo me back.

Even so, circumstances/desire or lack thereof delayed my return until the coupon's expiration date.  So some might argue that my problems could be blamed on procrastination.  Before I continue, I must address that.  You see, a business that has offered discounts on Groupon must know that people might wait until the last minute.   So they should plan for this contingency.  Well, Teany did not plan.  At all.  In fact, they did the opposite.

Upon entering Friday night, I felt something was a little off, starting with the fact that our table's detritus was not cleared for a long time.  It was not super crowded, so we figured it wouldn't take long.  When the girl came to clear the table, I showed her the Groupon and she said it had been particularly busy today because of the Groupons.  Fine enough, but after clearing the table she did not clean it.  Ew.

Then we heard the first 'Sorry', when the girl (who was pretty young, as was the only other staff in the place, a guy who looked about 15) addressed a woman sitting near us.  It seems she'd just given away the last slice of cake the woman had ordered to a takeaway.  The woman looked none too happy, especially when she ate the alternative.  Aren't you supposed to look cheerful when eating cake?  Otherwise what's the point?

Next the first unthinkable happened.  We found out there were no scones left.  None.  Bathy was crestfallen.   Another 'Sorry' ensued.  I hadn't heard so many sorries outside of going with Bonnie to that Indian tailor in a basement in Jackson Heights.  My only relief was that they still had the 'teanychino', but I must admit even that was just okay.  Bathy got a slice of strawberry shortcake, which was just dry.

I didn't want to be further disappointed (the menu was not what it used to be either), so I asked for the farmhouse cheddar toast, which is supposed to come with pesto and tomato.  Then I waited.  And waited.  Waited, by the way, through a surprisingly lackluster soundtrack.  It must have been half an hour before I noticed the guy behind the counter taking slices of wheat bread from what looked like Stroehmann's or Arnold's - you know, the kind you get at Key Food for $2.50 a loaf.  I thought they couldn't possibly mean to use that bread...could they?  I kept wondering as I continued to hear the girl say 'sorry' at other tables. 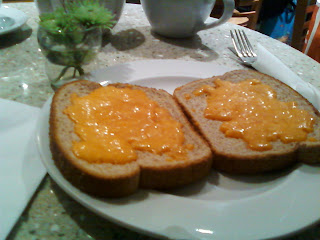 I was stunned for a few minutes.  My first coherent thought was that I know I said no tomato, but couldn't they have least put some pesto on top?  But the real problem was that I waited far too long for something that takes less than three minutes to make.  How do I know this?  Well, because that's how long it took me to make this: 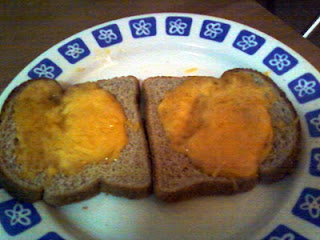 I mean, it could be cat vomit...I should know - Moofer was sick later that night.

﻿For the first time in my life, I sent my food back.  In fact, I just turned in my Groupon and we left.  The girl sorried again and offered pretty much anything else on the house.  She also said she felt bad being a part of 'this', like she was on a sinking ship.

So that's it.  I try to find something good about a place, even when it's mostly bad, but I can't think of one thing.  Okay, at least I didn't see evidence of vermin.  But I can tell you this:  I am officially DONE with Teany. Horrible service, terrible food.  Makes McDonald's look like a great night out.

In the midst of writing this post, I read online that the co-owner of Teany, Kelly Tisdale, just had a baby with Mike Myers.  That's pretty awesome, so congratulations....this makes it more difficult for me do be this negative in my review, being a fan and all, but it's not a personal attack.

The growing number of women I'm acquainted with who have recently become mothers can tell you that when they go on maternity leave, they get somebody to look after their job or business while they're away.  I'm not sure anyone's looking after shop at Teany right now.  It's like kids are playing 'Restaurant' with stuff in their kitchen, but they're starting to get bored.   At this rate, I'd prefer to see Teany close down than  experience what we did on Friday night.

I was a loyal customer, but there are limits.  I truly hope my next Grouponing adventure makes up for this.
Posted by Catherine at 7:00 AM