One of the biggest benefits of being broke is that you're forced to take a staycation.  As a homebody, this is not a problem.  Of course, it's not healthy to stay indoors entirely, so I made a few plans and used an online coupon, this time to some success.

A few months ago I purchased a Living Social coupon for The Tea Set, which is on 12th Street and Greenwich Avenue.  I was almost hesitant about this one, as it's just down the block from Tea and Sympathy, but if they both end up doing well, maybe it's a good thing.  Could we possibly be developing a strip of tea shops?  Oh please make it so!

My other hesitancy was about its 'B' rating from the DOH.  For those of you not subject to such ratings, it's a relatively recent thing to have eating establishments graded 'A', 'B' or the very doomed 'C'.  I'm not a stickler about these things; if I've been going to a place for a while without complaint, a 'B' rating will not stop me.  'C' on the other hand...with so many places to choose from I think I'd skip these.  The Tea Set had a 'B' rating, which meant that I didn't want to bring anyone with me for my first visit, just in case.  Not a problem!  As I mentioned in my last post, I'm not averse to taking afternoon tea alone.

Just to be safe, I made an online reservation.  It was good that I did this, as it turned out that Tuesday at 2PM had a rare late lunch rush.  It cleared out halfway through my hour there, but even during the busiest time I was greeted in a friendly manner and shown my seat in the middle of the action.

More than anything, what would bring me back was the excellent service.  The guy who helped me (once again I failed to get a name) was helpful and conversational without being over the top.  He was able to make tea suggestions, and checked up on me on a regular basis.  Also, a gentleman who sat near me asked for gluten free options, and though there aren't too many of these on the menu, the staff prepared something special for him not from the menu.  You have to give them points for that!

It's also really cute inside, with cushioned seats and black-and-white sunflower chairs.  There's a relatively private seating area in the back, with a little bookshelf (books!), and two cozy window seat-tables.  On nice days there's some outdoor seating.

As for the actual afternoon tea.  Well, one of the tea sandwiches did have tomatoes in them (my nemesis), but since I hadn't mentioned my aversion, I only have myself to blame.  Once removed, all of the sandwiches were good: you can't go wrong with Gruyere cheese!  A slight complaint about the bread: it was cut from a baguette, which was delicious and crusty, but its natural hardness made it a bit difficult to be dainty.   A couple of times my hand went projectile into the 3-tiered service, nearly causing a spill.  I'm not exactly a ballerina, so your mileage may vary.  There were little tarts, with cream and jam on the side, and macarons (!), one of which was made with sesame seeds, a first in my book.  Also, there was a lovely chocolate mousse cake - are they seeking my assassination?  The only thing missing were scones, but since The Tea Set has the whole French vibe, it's forgivable.

My tea was called Organic Femmes Fatales, would is aptly names as it's to die for.  A green tea with coconut and safflower - almost islandey but okay with French-style pastries.  It came in a tall glass with a strainer you have to flip over to sip the tea.  I want one!

So it looks like 'Grouponing' isn't a total waste of energy.  It really is up to the place of business to make it workable. 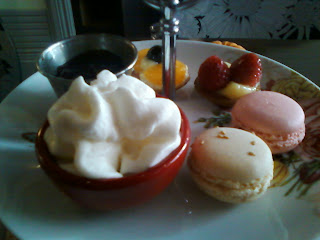 Note: My digital camera has served me well over the years, but it's starting to have some issues.  It'll conk out during most important moments, such as when I want to take a picture of my flipping tea! I had to resort to my less-than-gorgeous camera phone.  So I'm saving up for a new, hopefully awesome camera.  These don't come cheap (and neither does afternoon tea), so I decided to put a PayPal 'Donate' button on the sidebar of this blog.  No pressure, but feel free!
Posted by Catherine at 7:00 AM

We took lots of staycations this year, not only because we were broke but also because my other half was applying for a UK passport and wasn't able to travel. 2012 is a big year for us, hopefully!

I love the look of the cakes! Not your average wares.

Staycations rock! So does actual travel, but we take what we can get.

Interesting post. What do the A B C ratings cover? cleanliness? that would make me a little concerned, I guess.

The reasons for the ratings are on a Department of Health website. They list the violations, which can range from the size and location of kitchen items to mouse droppings. 'B' restaurants are a bit of a stretch for me, but the only thing I saw at the Tea Set that wasn't necessarily squeaky clean was when a fly landed on my table. I can think of worse things.