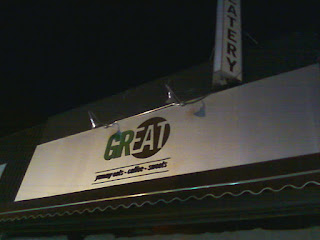 You all might remember a post I did on a bakery that opened up on Steinway Street called Cream.  It wasn't bad - between decent cupcakes and chocolates, not to mention macarons, I welcomed Cream with open arms.

Then, just like that, it closed.  I was disappointed, but not tragically so.  They'd never taken my suggestion to add a good tea menu, and I can go anywhere for your average bag-in-a-cup that was on offer.  Still, when I learned there would be a similar place opening up in its stead, it wasn't bad news.

A short time later, I saw that Great was open.  A quick peek inside didn't rev me up or anything - it looked more like your generic deli in midtown Manhattan than a cozy bakery, even if they did still have cupcakes.  That didn't exactly encourage me, and neither did the new name.  Great?  Not my favorite word - nearly as overused as its subtitled "Yummy Eats".  (Again, it's not that these words need to be retired, just used less frequently.  Thesaurus people!)

On the way home from work one day, I decided to stop in and pick up some cupcakes or pastries, whatever looked good.  I stood at the counter for some time, and the two people working there never turned around once to help me.  They weren't busy, either, just pretending I wasn't there.  I know I can be crankanoid sometimes, but it was pretty blatant.  Soon afterwards a friend of theirs came in and they both rushed to get him some cake.  Now I've said this before, but I don't need to be fussed over.  I do, however, like an acknowledgement that I'm a living, breathing, potential regular.  Well, that did it for me.  I got a pint of Haagen Dazs from the grocery instead.

I did give them one more chance.  In May, I was on Steinway with Millie and feeling slightly hungry, and in need of caffeine.  So we went in, and like the weather, the staff was a moderately warmer this time.  I got a piece of red velvet cake and a cup of coffee (I guess the tea hadn't been promising.)  There was seating, so we stayed for a while.  And here comes another overused word...Meh.  It wasn't horrible, or of Teany caliber, but it just didn't come close to blowing me away.  The coffee was good, but that's not gonna cut it when you're steps away from Starbucks.  There was pizza, too, but we don't really need anymore pizza in Astoria.  We're set.

When I saw that the storefront had a realty sign in it last week, I did not mourn or wonder why.  I only now hope that something better comes to replace it.  Heck, even another Martha's Bakery would satisfy me.  Just don't turn my head with promises of Greatness unless you plan to deliver.
Posted by Catherine at 6:00 AM