Let me just start by saying something positive about Radiance.  Of all the tea rooms I've been to, the staff at Radiance has the best tea knowledge.  Elsewhere you'll get someone who might just know the difference between black and green tea.  I selected Pao Chong, which is an Oolong - because you can't go to an Asian tea room and have Earl Grey.

And now let me continue by being kind of negative.  For one thing, it's called a Tea House, which puts me in mind of a major fashion label, and this is fitting (get it, fitting?) because the price of an Afternoon Tea for two would actually put a dent in the price of a couture dress.  I used a Groupon, which gave us over 50% off, meaning before tax and tip we paid $25 each.  That's with the Groupon.  Yes, the discounted rate is what I'd pay for my share in the afternoon tea at Alice's Tea Cup.

"What?  Why are you comparing Radiance to Alice's Tea Cup?  They're two totally different places?"  Yes, they are.  At Alice's, you may wait forever for a table, but it's an equal opportunity wait, and when you are seated, you get served swiftly, and you walk out - no, your roll out, completely satisfied.

After a wait of nearly an hour between both courses, here is what the two of us shared: 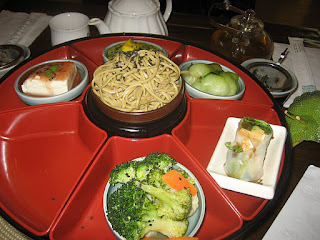 Granted, they still had to add the dumplings to the above, but they were still small, and there were only two of them

Can you spot the tiny scones?
Dessert was better, though a bit overkill on what you can do with green tea.  Yes, I did like all the sweets.  I didn't say the food tasted bad.  It's just that it wasn't worth $25, much less $55, per person. 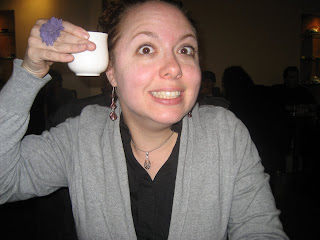 Holding on for dear life to my only means of sustenance...


I'm not saying I won't go back to Radiance.  I don't get there often enough, because it's far enough from my job to not be able to make it for lunch, but close enough to my job to not really want to got there on the weekends.  It is close to Central Park, which is a good selling point (but let's not forget so is Alice's and a number of more reasonably priced places.)  I'm also not saying don't go to Radiance.  It's a lovely place, and people even have parties for children there (though I wouldn't).  I am saying I will keep searching for a more ideally priced Asian-style tea room.  I will be laying off the
Groupons, I think.  It's more often not worth it than a good thing.
Posted by Catherine at 10:50 PM