When it comes to restaurants, New York has it all? Or does it? In my rare excursions outside of my hometown, I have found places that are exceptional enough to warrant a return trek in the future. Because of this, I'm establishing a 'Wish You Were Here" feature, meaning why don't they have something like this in New York? Readers might object - they may be familiar with something that resembles this cafe or that shop. This is a possibility since I haven't been to every business in the five boroughs. So feel free to submit your substitutes. I'd be glad to give it a go - unless of course it's the horribly overpriced version (which means it's not really a substitute, is it?)

The morbidly-named Van Gogh's Ear Cafe is located in Union City, New Jersey. There's a college nearby, but otherwise this was the only place that seemed to come even close to a student hangout. The neighborhood is almost bizarre: nearly every store on its block and the others nearby were hair salons. I have never seen so many salons in one place. Seriously, if you are ever in this area, before you relax in the cafe, just explore a little bit. You might find a really good deal on a haircut.


With your fresh coif, you can enter the warm cafe and, if it's not too busy, you'll have a choice of plush chairs or a nice table. You could come alone or with a group and be suitably seated. You don't have to be a hipster to fit in here: I saw little kids and elderly folks along with woolen-capped bespectacled youngsters. And this is a relief. In any some couchy places around Astoria, for instance, you're mostly surrounded by "I knew this place before it was cool" types, which I've had up to here and back again. This in itself makes me hesitant about having a Van Gogh's ear in New York. Pretentiousness is inescapable. 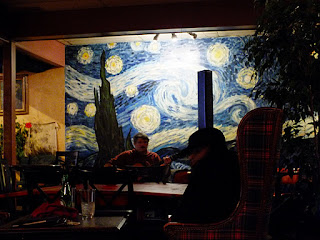 I mean, check out the entertainment.  He's just some guy from the neighborhood, no quirkiness, no irony, just playing classical tunes on his guitar.  It was unobtrusive but enjoyable. I had a Thin Mint Latte, which would have been dessert enough for me, though the warm and oh-so-perfect for autumn Apple Crumble was wonderful.  There's a full menu of food, drinks and desserts, and it doesn't go overboard on the Van Gogh theme.  Next time I'll have to try the loose leaf teas. 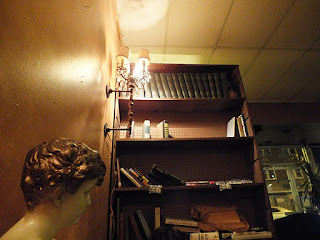 We of course sat by the bookshelves.  The books were on sale, but the selection was nothing to write home about.  To me, this was the only downside.  You want to sit for a while and relax with a book, but if you didn't bring one of your own (and for once I was lax on this end), you might feel a little antsy. Lesson learned.

So, while it would be nice to have a place like this within walking or subway distance from home, it would probably be a disappointment because it'd attract crowds who'd likely buy one coffee and spend hours with their laptops trying to be noticed.  You know what I'm talking about, Starbucks.   Anyway, it's a short bus ride from Port Authority, and honestly the views were worth it.  We passed a library in Weehauken that looked like it was out of a fairy tale.   If you can't get it to come to you, you must make the journey.  I sound like a fortune cookie.

Posted by Catherine at 6:44 AM