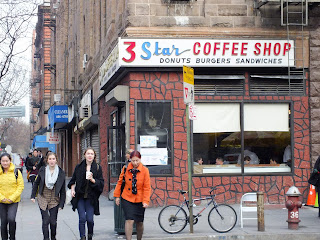 People have different ideas, about certain words.  "Nerd" or "Geek" are good examples of these.  You might use these titles on someone who watches Star Trek or knows more about them computer doohickeys than you do, but someone who actually goes to the conventions wearing the ears and speaks html fluently would disagree.

The word "foodie" is used fast and loose nowadays.  What is a foodie, anyway?  Someone who frequents more than two restaurants in their neighborhood, or someone who knows the names of the head chefs in every restaurant within a ten mile radius of their home?  Is it the guy who can make recommendations to the tourist on the street, or the guy who can recommend a wine by its region, year and specific vineyard?

Depending on your definition, I may or may not be a foodie.  I live in New York, which is one of THE restaurant capitals of the world, and specifically Astoria, a place that even draws Manhattanites out for dinner.  A good portion of my friends are regular restaurant goers, and walking guidebooks.  Anyone who's read this blog knows that I've tried as many tea places I could get to, and have both positive and negative criticisms for most of them.   I don't know, though.  Despite being able to tell you many of the best and worst places to have brunch in Astoria, and which tea room is most generous with their clotted cream, I have a much simpler side as well.  I freely admit I have passed the threshold of McDonald's in recent months (more than once), and I get occasional cravings for Cup of Noodles (which is easily satisfied.)  And I love, and will always love, coffee shops and diners.

When I was a kid, it was a rare treat to go out to eat at all.  It was almost a celebration to be taken to Neptune Diner on Astoria Boulevard.  I continued going there with my friends more regularly as I got older.  Then there was the Georgia, Buccaneer, Bel Aire, even the long-gone Sage Diner (the latter missed the 'e' in its lit sign, which was fitting if you were flopping there on a late night.)  These places were good because you could come at all hours, with a few or many friends, and even if you were broke you could get something small and not be judged.  You were really there to socialize and get a bite to eat, and rarely did anyone look at their plate with a critical eye.

The smaller version of the diners were the coffee shops, though the names were sometimes interchangeable.  Here you'd get the breakfast special or a souvlaki, or even a cup of coffee - though some places have you sit at the counter if you come alone or just get a coffee.  That's a little irksome, but over time I've come to understand they needed to save space for parties of four.  My local coffee shops were the unfortunately named Mini Star and the Blue Restaurant.  In its later years the Blue also had a Mexican menu - their Huevos Rancheros were out of this world!  It was a New York institution, one which is still thriving in some neighborhoods - I saw a good amount of them on the Upper West Side recently.

Why am I talking about these places in past tense?  It's not like they don't exist anymore -well, except for the Sage and the Blue.  I've been to quite a few of these within the year, and will continue to go.  But I think of these in terms of the past because most of the people who came with me to these places either no longer do so.  Some have moved away, so naturally they can't go.  What's more alarming to me, though, are those who've moved on, or those who just don't understand the point of these places.

That's the problem with New York now.  The old faithful establishments are scoffed at as inferior, or only to be viewed ironically. (Cue hipster vitriol here)  But even if someone is not a hipster, it's just a prevailing attitude that has to be balanced out.  I'm mainly directing this towards Astorians, since it's the area where I've been able to observe the trend toward upturned noses.  Coming from somebody who just might be a foodie, what the heck is wrong with diners?  I love a good brunch like the rest of them (and must admit it was a nice treat to have one at Diwine, where you get serenaded by a top-rate jazz singer), but do I really need to pay $15 each weekend for eggs and a mimosa?  Honestly I usually come out of brunch still hungry, something that never happens to me at a diner.  And yes, I know diners have brunch specials too.  The difference is, if you're on a budget you could just get a flipping muffin.  Also, the staff at diners tend to be friendly and homey without being gushy about it.  That's more than I can say for a recent experience at Alice's Tea Cup, Chapter III (but that's a rant for another day.) 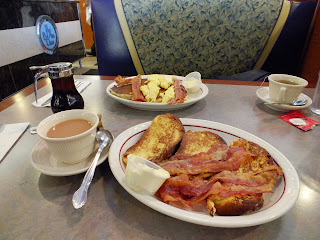 These two meals combined were cheaper than one brunch at the new joints.

You might say this is odd coming from the Tea Queen of Astoria.  I've always moaned against the lack of a good cup of tea in diners and coffee shops.  Still, this lack happens even in the newer restaurants.  It's a small miracle to find a Mighty Leaf teabag, much less a proper pot of tea at the correct water temperature.  This is a commonplace problem, but (big surprise!) the meal isn't always about the tea.

Also, I'm not raising a fist to the air at all the changes in my hometown.  It's fun to make new discoveries, and I hope the businesses do well.  I am merely saying that sometimes I want to (or need to) keep it simple, and there's nothing wrong with that.  In other words, in with the new doesn't always have to mean out with the old...unless you're watching an episode of 'Hoarders.' 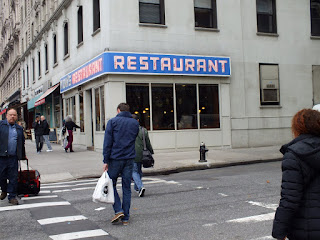 I mean a song was written about this place!  Oh, and the Seinfeld thing.

bravo!!!
power to the natives!!!
nice read and very true.