The Future of Us and a Pairing

A man who worked in the local library showed me how to do a search on the Internet.  Google wasn't around yet, so it must have been on Yahoo.  I didn't have a computer at home, and wouldn't have a personal email address for another couple of years.  I knew people who did, but they were either nerds, well off, or needed it for something work related.  Besides sending emails and looking up something for school, the Internet wasn't an everyday concern for me.  A cell phone-carrying friend was still a rarity, and phones were only phones.  If you were in a restaurant, you only checked in physically, and your opinions on them or any product you tried tended to be via word of mouth.

That was my 1996, the year I landed my first full-time job, and started to live what I thought was a grown-up life.  If I was able to see my current Facebook page at that time, what would I think?  Would I like older Catherine, or would I try to change my future and whatever disappointments I'd perceived?

The Future of Us addresses this line of thought.   High school students and neighbors Josh and Emma are living a normal day to day life in 1996, when Emma sets up an America Online address and out pops Facebook circa 2011 with all the minutia and keywords of our time.  When they realize what they're seeing is their future, they are faced with the problem of whether they should make changes to their life now or be affected at all by what they see.  Of course every tiny step they make affects their future statuses in rather large ways.

That's it without spoilers, but I have to say it's a fun concept, especially for someone of that generation.  Well, I'm slightly older, but close enough.   The Future of Us is not going to be my favorite book of the year - the only laugh I had was the speculation over someone's post: "I miss Pluto,"  and it started to feel repetitive, but it was a quick read anyway. 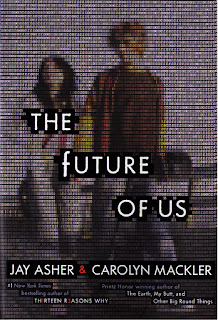 So what would I pair with this book?  I'd say Apple Peach fruit tisane from McNulty's, my beverage of choice in the mid-nineties.  And anything else I used to eat around that time - I was really skinny fifteen years ago.
Posted by Catherine at 3:05 AM

The story sounds intriquing. I think I'll check it out and tell them Catherine sent me. Enjou always, T