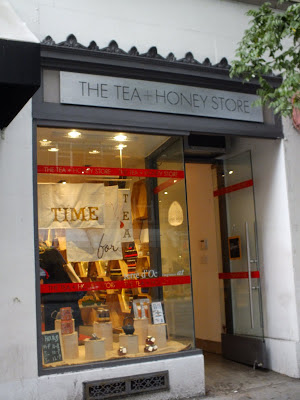 I'd been disappointed when The Tea and Honey Store vanished from its Grand Central Terminal spot.  It had always been a welcome site for me when I emerged from my obnoxious morning commute, in a way that perhaps only Lush would compete with (what with its olfactory appeal and all.)  But then my office moved locations, and since I rarely find myself in Grand Central it didn't matter as much to me.

This Sunday, I paid a visit to the City to go to the Frick Collection to see the drawings from the Cortauld Gallery, and van Gogh's Portrait of a Peasant (Patience Escalier).  It was a bit crowded, but worth it.  After I'd had enough headed back a roundabout way to the F train, which is not my normal station, but the trains were still a little off-schedule after the storm.  I won't complain about this, since as I mentioned before, my area was hardly affected by 'Sandy', and therefore I'm in Thankful Mode.  Anyway, I passed DAVID's Tea on Third Avenue, then Alice's Tea Cup on 64th Street, and lo and behold, on the same street as the 'F' train's 63rd Street Station was The Tea and Honey Store!  Well, that was a pleasant surprise.  I didn't actually shop there since I really need to save for London and my upcoming root canal of doom, but I was happy to see it nevertheless.

It's also further proof that we're developing another 'Tea Strip' in Manhattan.  The West Village has a whole section that keeps it the top tea-lover's destination, but the east 60s is giving it a run for its money.  And I have no problem with that.