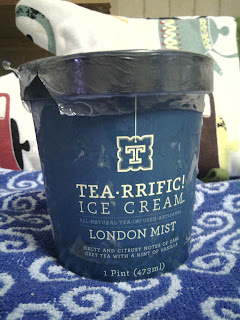 Here is another discovery found at a routine visit to a nearby grocery store.  I guess the makers of this brand needed us to know it's a tea product.  Well, they saw me coming.  There were 4 or 5 different flavors available, but I stayed true to form and picked the one that had 'London' in it.

Now it's not like I've never had tea-flavored ice cream before.  Green tea ice cream, something that in the past I could only find in Asian shops (and Thai Pavilion), is now part of the Haagen
Dazs line, as well as the Chai varieties that are popping up everywhere.  But who can resist the adorable teabag logo - certainly not this failed dieter!  Yeah, I promised myself I'd lay off ice cream for a while.  The problem is, though, there's just so many things I can avoid.  At this point I have to stay off coffee, as its effects are truly unhealthy to my nerves (I'm not being a melodramatic Mrs. Bennett, I promise you.)  So asking me to lay off ice cream as well is just unfair.

It might have been kinder to my wallet: this pint came in at a whopping $5.99.  That's madness.  Talenti Gelato, which is unbelievable and my go-to for what to bring to gatherings, is at least a dollar less in the same store.  Tea-rrific(!) had better live up to its name!

So, it did but it didn't.  It was good, of course it was.  Still, it wasn't as Earl Grey-ish as it could have been.  I've had Earl Grey ice cream before, so I do have something to measure it up to.  Also, for all its calories, it wasn't nearly as creamy as it should have been.  Again, it wasn't horrible, but I'd lop off at least 2 bucks before making the promise of its name.  I managed to polish off half a pint before I came to this conclusion.  What bathing suit weather?

It is my duty as Tea Queen of Astoria to try each flavor, but I'll take my time.  Six dollars doesn't grow on trees, and it's summer movie season.  Also, I should not try this tea in the evening.  My stomach was okay but the caffeine kept me up.  Oh the perils of living the Tea Life!
Posted by Catherine at 5:05 PM