Haven't Been There, Haven't Done That 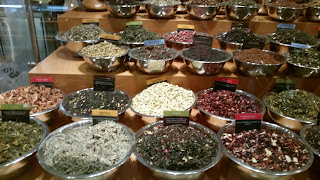 There used to be only a handful of tea-related places to visit in New York, and a to-do list could possibly be fulfilled within a short amount of time.  Over the years I have missed a few spots, some of which I really missed as they are gone now.  Here are some places I intend to take tea at, though whether I will or not is left to Future Catherine:

Cha'an - I don't get down to the East Village as often as I'd like, and when I do it tends not to be when I'm in a tea mood.  I know that sounds odd coming from me, but it does happen.

Harney & Sons (upstate) - I've been to their shop in Soho once, and even that was about four years ago.  It's not open late into the evening last I checked, and I have little cause to be in Soho during midday hours.  There's a Harney Fest in their Millerton, NY location, but I can't make it this time around.  Such is life.

Palm Court Plaza Hotel - I have had tea in the Plaza Hotel, but only a quick chamomile in the Food Hall.  I recommend it, but someday I need to take it upstairs.

Lady Mendl's - For years, and years, and years I've failed to make it here.  Sadly, recent reviews have hinted at a downturn in service quality, and I hope I can pay a visit before it goes concave.

The Russian Tea Room - Honestly, I'm not dying to go here.  But it's there.  So maybe.

Rose House (Flushing) - It would've been better to try when Bonnie still lived in Flushing.  Also, this has mixed reviews online.  The thing about Queens, though, is that we don't get too many full-on tea rooms that aren't bubble tea.  I love bubble tea, and FYI visit Tea and Milk on 34th Avenue if you get a chance, but until something more formal opens in Astoria, this is what we have.

The Lowell/Pembroke Room - I prefer dedicated tea shops to hotel tea rooms, mainly because it's easier on the wallet most of the time, but more than one person has recommended this place to me.  It's also not too far from where I work, and super close to an Alice's Tea Cup and a David's Tea.  I need to complete the Tea Strip!

Posted by Catherine at 7:30 AM

I can definitely recommend the Pembroke Room. I recently had tea there because I was interviewing the grower for their new Scottish tea offerings. The smoked white tea is awesome! I don't think I've ever been to a place that was more beautiful or with better service :)

Thanks Nicole, think I'll put this one at the top of my list!

I REALLY enjoyed Tea And Milk, but next time I'd love to try the Plaza! And then we can go feed ducks again ☺️☺️