It doesn't quite feel like it yet, but we are promised a dip in temperatures this weekend.  I look forward to many strolls, and maybe finding a new tea/book destination or two?  It's fun to discover, but it's also good to revisit, especially when it's been a long time.  And it's been too long for Communitea.  With good reason: it was closed for a while.

I heard it had reopened in another spot.  It's still in LIC, but now it is on a side street, and you can almost miss it.  On a crazy long walk weeks ago I spotted it, and it was like seeing an old friend who's changed a bit in a decade but is essentially the same.  So I knew I'd have to go back, and when Pam suggested going there on a beautiful (though not autumnal) day, I was game.

There was a slight Catherine-esque reservations about going back.  Reading my previous blog entry, I felt weird. It had the attitudes of a decade-younger me, who didn't have many cares and didn't know she was about to.  But I can't fault a tea business for giving me melancholy. 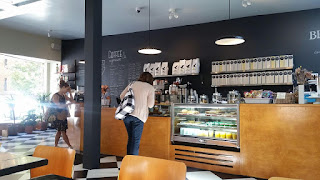 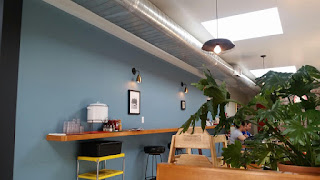 I'm glad we went.  I find it similar in setup to its first incarnation, down to the chalkboard walls, but improved as well.  Loved the blue walls further in.  It's bright, but not overpowering.  It was still the comfortable but not plush, bring your laptop, kind of place, and that's exactly what they do right.

Pam and I both had curry chicken sandwiches - my sisters and I have a special love for this - sometimes called Coronation Chicken - it's a tasty combination of flavors, and Communitea didn't disappoint here.  Also, we split a gluten free pumpkin cookie (autumnautumnautumn), and an almond croissant.  Since it was a warm day after all, I had an iced green tea.  All was good.  I mean, I didn't fall out of my seat with culinary delight, but that's hardly the point to this kind of tea shop.

There are many varieties of tea to buy retail, but I didn't look into it that deeply because I have enough at home (and at work, let's face it.)  However, I doubt I'd feel as strongly about the high prices, as I've grown used to it by now. 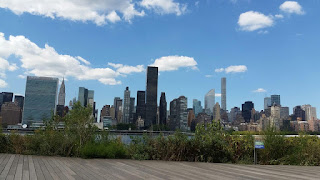 Afterwards we further relaxed by the skyline - it was a good day for it, and even though I lament the incredibly jacked up rents thanks to LIC's gentrification, I have to say the waterfront park space is attractive and welcoming.  What can I say?

Am I going to take forever to return, once again?  That I cannot know.  Last time I was grumbly about the lack of tea spots in Astoria.  This is beginning to change, which I mean to report on soon. Either way, if you're in the area, give it a shot!  I hear rumors of good coffee too.

Posted by Catherine at 7:30 AM

Next time I'm in the area, I definitely wanna go there with you and the Schmmop!