When I first became obsessed with tea, I did what I always do: read, read, read until I know as much as I can about a subject without having a degree.  In the early days my reading was almost entirely from books, and mostly books I could either find at my local library or easy to reach branches, with the occasional foray into Barnes and Noble or a used bookshop.  Finding tea itself took similar methods.  Ordering from a catalog was a rare exception.

Nowadays I've learned so much from reading online, and am able to readily purchase from all over the world.  To be honest, though, much of what I learn nowadays only reinforces what I knew before - though certain pronunciations and exact methods of preparation make more sense via video tutorials.

In the "I liked this before it was cool"beast lurking inside of my psyche, I've known the basics of matcha preparation since reading about it from a green tea book I found in the Central Library in Jamaica, Queens, but in this particular decade you can find a matcha expert, or a burgeoning one, within sneezing distance.

What about Oolong?  Not as much, not yet.  Sure, Twinings has carried its own bags of Oolong in grocery stores for ages, and Chinese restaurants often serve it (though I'm not finding as many of the old-school New York Chinese restaurants around), and occasionally I'll get a flavoured Oolong online but I don't know as much about it as I'd like to, and didn't pay much attention to its preparation.  At one point I bought a tea set designed for its particular type of prep and serving, but rarely used it.

What I suppose I'm saying is that, though I consider myself well-versed on tea, I'm not keeping up as much as I used to.  At work I tend to buy a breakfast blend, and maybe an Earl Grey or flavoured green, all in teabags.  I tried the loose tea method, but it took too long, and I ended up bringing its paraphernalia home.

One recent winter's day I found out that, due to moving semantics, my work was going to close at noon for the day.   Usually in such circumstances I head to Central Park, or the Met Museum, but occasionally I hit the Village, and I thought 'why not'?  I'd read online about a newish place called Te Company, and as I haven't tried any new places recently (except in my own neighborhood, which hopefully I'll get to in another post, for goodness' sake), I went to the West Village for a stroll.

I needed to eat, so first I had lunch at Tea and Sympathy (because why not), and then had a browse at Three Lives & Company bookshop (highly recommend), and that was only down the block from Te Company. 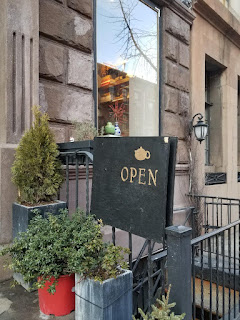 I immediately took to the location, as it wasn't in a typical storefront, but it felt as if I was welcome in someone's clean, tea-filled townhouse apartment. I arrived during a quiet period, which put me in a good mood right away.  It started to fill up gradually, but in such a way that did not disturb my highly-caffeinated (for me) self.

A brief detour into my crankiness: sometimes I become irritated when staff tries to "educate" me on their product, especially if it's something I know a bit about, but in this case the lady who helped me was understated but immensely helpful.  And not at all smug.  That's important.

There's a WAY to make proper Oolong tea, and it means the right water temperature and steeping time (and quality of water, if attainable). 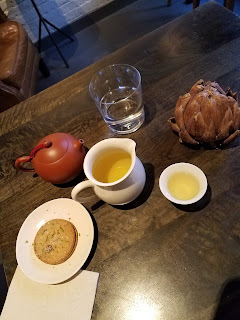 The tea is steeped in a warmed tiny teapot, and then transferred to a pitcher, from whence you can pour into the tiny teacup (my hands feel sizable using these cups), et voila!  Full flavour of love!  I strongly advise everyone to dispense with sweeteners in this kind of situation - I don't remember being offered any, and even if I were, I wouldn't hear of it.  This isn't your workaday cuppa, it's the Full Experience.  You wouldn't add sugar to a glass of wine, would you?  WOULD YOU?  You animal!

I had a pineapple linzer cookie, which surprised me with its pepper, but pleasantly so.

Now, I picked the least expensive tea I could find, as it was not budget-friendly, but I did not sacrifice flavour or enjoyment whatsoever.  Frankly, this was my gateway back into Tea Appreciation.  That sounds odd, because I appreciate my morning Yorkshire Gold in my mug (albeit a pretty mug) with a splash of milk at work: it's a good friend that wakes me up gently but firmly.  But I'd lost track of the slowdown, breathe, savour part of life.  Obviously there's a lot to do in our day-to-day life, but in the wise words of Mr. Bueller, "Life moves pretty fast.  If you don't stop and look around once in a while, you could miss it."  I don't want to miss the finer moments of life, and only stop when I'm sleeping - and I don't stop, I have crazy action-packed dreams.

So I'm going to try that every once in a while.  I will attempt to make Oolong tea right at home, and I will do what I used to do, and read up on tea sometimes.  And maybe I'll blog about it more frequently than every five months... 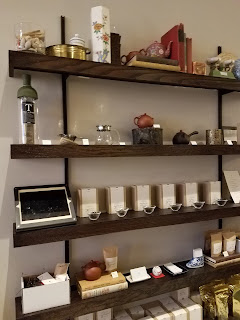 You totally knew the whole matcha thing before it was trendy. I think I learned about matcha from you! 😎🍵

Nicole - Tea for Me Please said...

Te Company is definitely one of my favorite spots in the city. You couldn't pick a better place for oolongs. I'm also obsessed with their tortilla de patata and the infamous pineapple linzers.